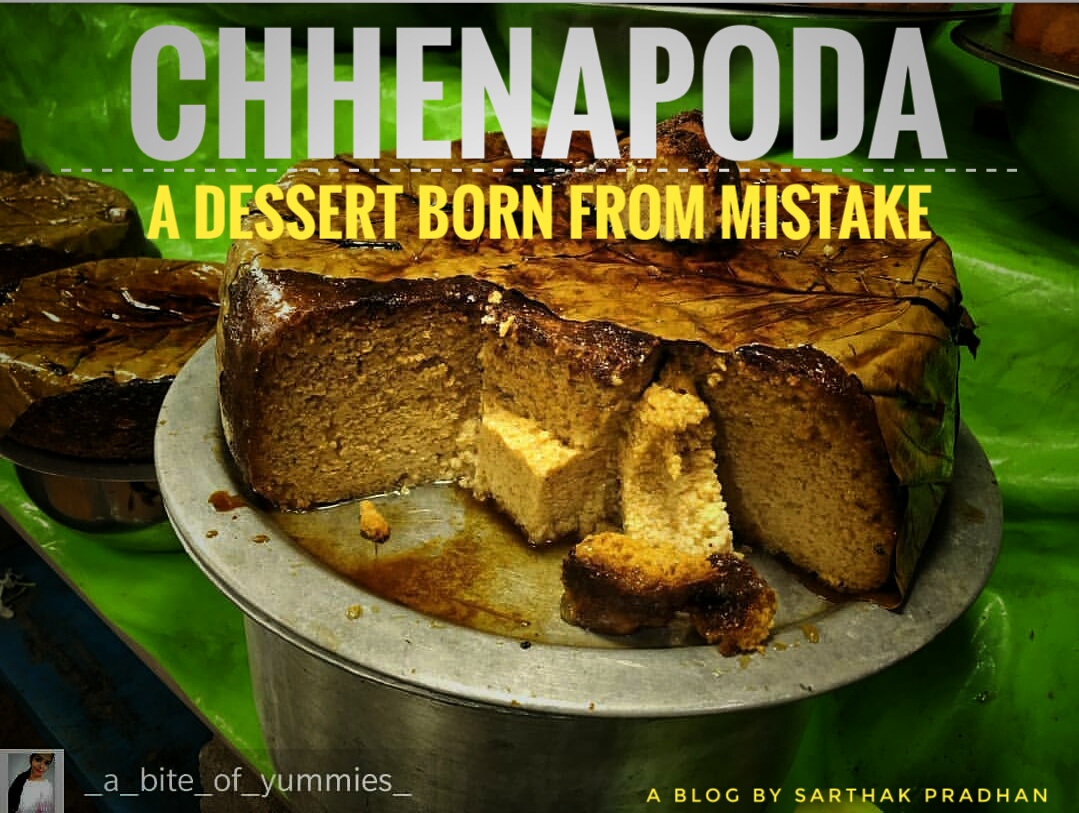 Chhenapoda is a delicious cheese desert from the state of Odisha in eastern India. It literally means roasted(Poda) cottage cheese( chhena). It is made of well – kneaded homemade fresh cheese chhena, sugar, Suji.  Wrapped in the leaves of the Sal tree and baked in a charcoal oven for many hours, the outer crust caramelizes and turns a delicious brown, while on the inside it remains soft and delicate. ( Here Caramelization refers to browning of sugar).Origin or birth of Chhenapoda is not less than a case of SERENDIPITY. It is originated in the town of Nayagarh in the first half of the twentieth century, quite accidentally.

The owner of a confectionery, a certain Sudarshana Sahoo decided to add sugar and seasonings to his leftover cottage cheese one night, and “by mistake” left it in an oven that was still warm from earlier use. The next day, he was pleasantly surprised to find out what a scrumptious dessert he had created.

From that day to today, chhenapoda is the most sought-after sweet in Odisha and due to its overwhelming demand it is also known as Dessert of Odisha. It is made domestically or commercially allover Odisha. Either sugar or gud ( jaggery) can be used to make it.  It is now also produced and popularized by OMFED and others private milk production house.
Chhenapoda has a special place in all travel show and cookery show in India.
The whole world enjoys the delicacy of this sweet which is born just
“mistakenly.”

The so called inventor of Odisha’s this showstopper dessert Chhena Poda Sudarshan Sahu passed away at the age of 86 on 23rd November 2016. Sudarshan breathed his last at his residence in Kacheri Bazaar Nayaragh.He came to Nayagarh in 1947 and set up a hotel in Daspalla. There he invented Chhena Poda after experimenting with the left over cottage cheese. From Jawaharlal Nehru to Biju Patnaik everyone liked his Chhena Poda and praised him for his invention.