The Vāmana Avatar is the first Avatar in which Lord Vishnu incarnated as a human. He is also the first incarnation of the Second Age or Treta Yuga. This is the fifth of the Dasavatar. 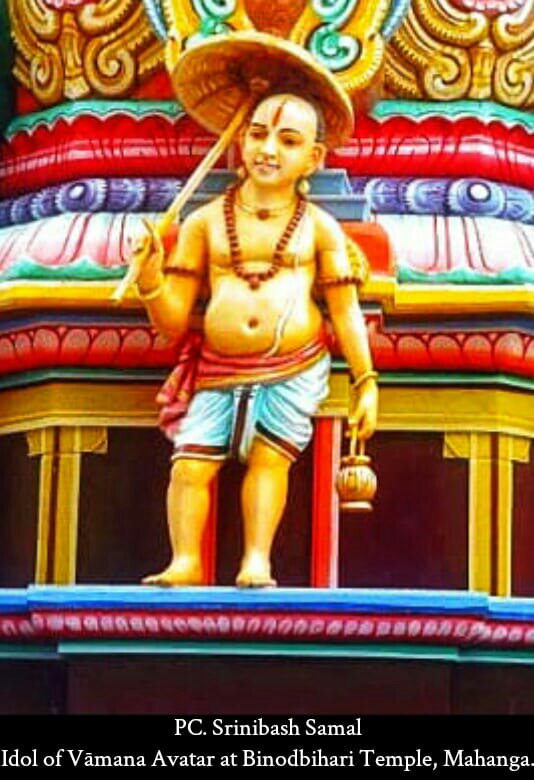 Shrimad Bhagavata Purana describes that, Vishnu descended as the Vamana avatar to restore the authority of Indra over the heavens, as it had been taken by a benevolent Asura King Mahabali (or simply called Bali).
Aditi took Payovrata to propitiate Lord Vishnu. As a result, Vishnu incarnates as Vamana and was born from Aditi and Kashyapa. He is the first avatar to seem with anthropomorphic aspects, although he does seem like a dwarf Namboothiri Brahmin. He is the twelfth of the Adityas. He was extremely intelligent and full of pranks. 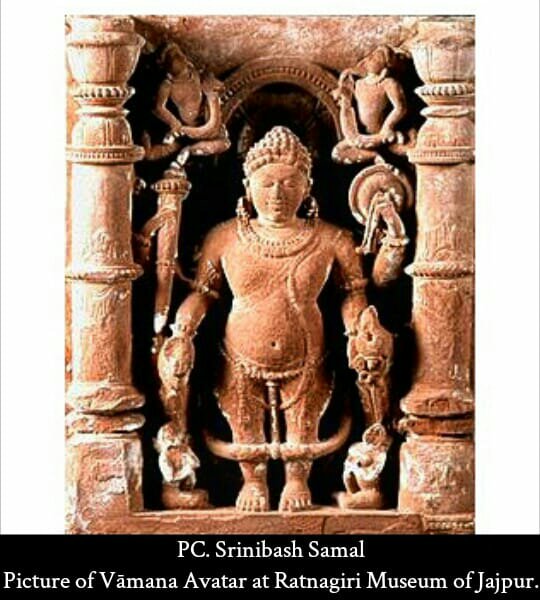 Why Lord Vishnu incarnates as a Human ?

The Vamana Avatar starts with the Asura King Mahabali (or simply called Bali). Bali was the great grandson of Hiranyakshipu, the grand son of Prahlada and son of Virochana.
Mahabali was a a great ruler and his people loved him. The people were very happy and prosperous under his rule. He was taught the Vedas by his grandfather Prahlada and after that by his teacher Shukracharya.
[After the churning of the ocean, when the Devas had taken the Amrit, Indra had killed Bali. Shukracharya brought back Bali to life, with the help of his Mrita-Sanjibani mantra.]
Bali performed severe penance to Lord Brahma. Finally Lord Brahma appeared him and without asking any questions, he granted Bali his boon.
Shukracharya was a very good battle strategist. With his help, Bali soon conquered the three worlds. Bali defeated Indra and took over the heavens and taking over the three worlds. According to Vaishnavism mythology, the defeated Devas approached Vishnu for help in their battle with Bali. Vishnu refused to join the gods in violence against Mahabali, because Mahabali was a good ruler and his own devotee. So Bali conquered the gods through great religious practice and asceticism. He drove out Lord Indra.
Guru Shukracharya once called him, ‘Bali! You have now conquered the three worlds. However if you wish to always be the Lord of the three worlds, you have to perform Hundredth Ashwamedha Yajnas (homa sacrifices). It is befitting that a king like you should perform the Ashwamedha Yajna, then you will always be the king of the Three worlds.’ And Bali nodded his head and started about making preparations for the Yajna.
While Indra was sitting beside his mother Aditi in his father – Kashyap’s hermitage. Aditi knew what are the problems with the Devas and suggested to meet with Lord Vishnu to Indra. And he went to Lord Vishnu for help in conquering Bali and taking back his place with Gods in heaven. Lord Vishnu obliged him and took birth as a Dwarf Brahmin boy from Aditi and Kashyapa.
Throughout an Ashwamedha Yajna, Bali was granting desires to his crowds out of his kindness.
Vishnu appears at this ceremony as a dwarf mendicant Brahmin called Vamana transport a woody umbrella. 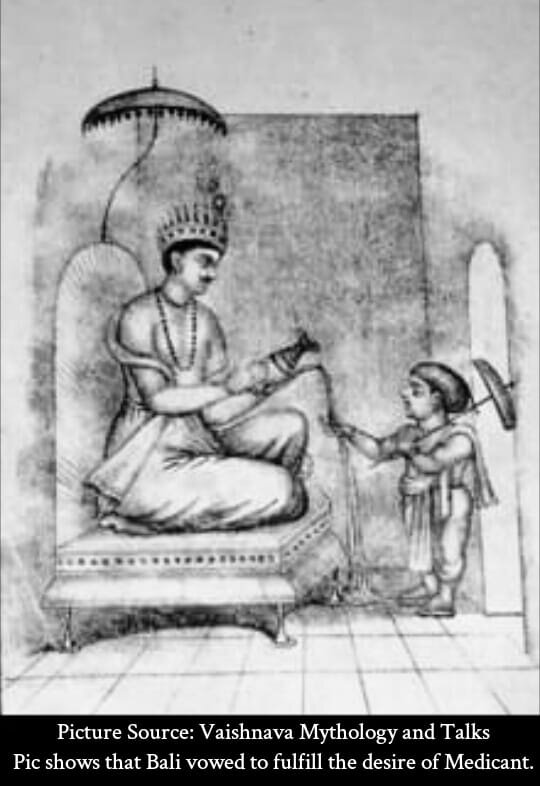 The king honored the Brahmin and invited him to receive anything from him. However Guru Shukracharya was looking at the boy suspiciously and recognized the Brahmin’s true self as Lord Vishnu. He warned Bali, ‘The boy is none other than Lord Vishnu. He has come here on behalf of Indra. If you give him what he wants, all will be lost…’ 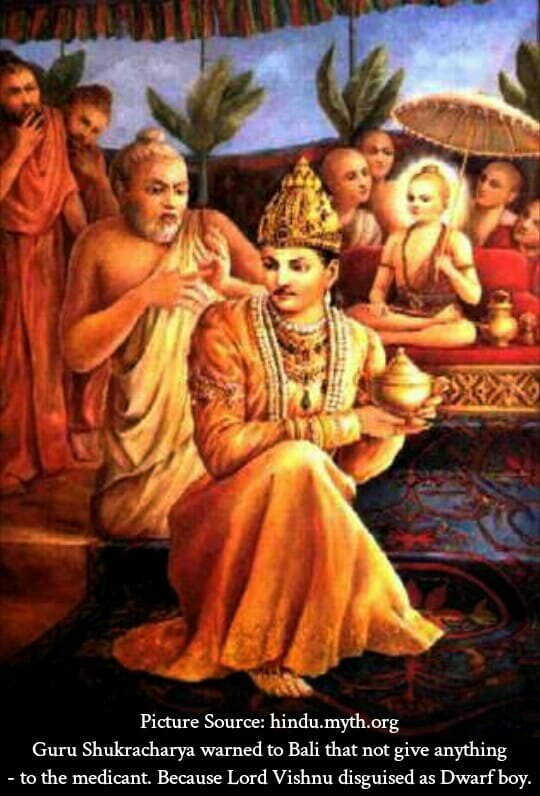 The king offered anything to the boy – gold, cows, elephants, villages, food, whatever he wished. The boy said that one must not seek more than one needs, and all he needs is the property right over a piece of land that measures “three paces”. Bali finds the dwarf’s request amusingly small and irrevocably grants it.
Then Vamana then grows into a giant of cosmic proportions. In one step he covers the earth, in another the heavens, and for the third, Mahabali offers his head on which Vamana steps, sending the demon king to the Patala (netherworld). And gave the king immortality for his humility. 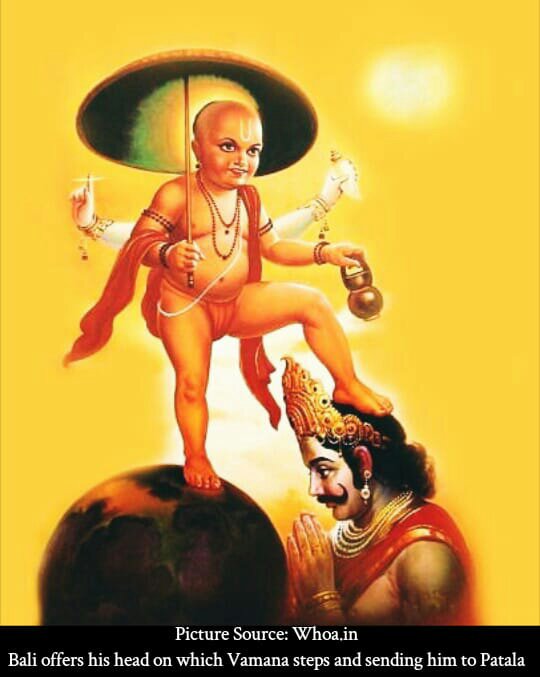 He was also allowed to return every year to see the citizens of his country. The festival of Onam for some and first day of Diwali for some is related to this return of Mahabali to a visit to earth once every year. Some texts state that Vamana gave the lordship of the netherworld to Bali.
The Vamana avatar has roots in Vedic texts of Hinduism. The hymns of the Rigveda describes Vishnu as that benevolent god who in three steps defined all there is in the universe. The giant form of Vamana is also known as Trivikrama (literally, “three steps”).

The legend of Vishnu covering the universe in three steps is found in Vedic texts. For example, hymns, 1.22 and 1.154 of the Rigveda describe Vishnu as that bountiful, kind, just god in three steps defined all there is in the universe. Other Rigvedic hymns that mention three steps of Vishnu include 1.154, 6.49, 7.100 and 8.29, and in these the context is of a benevolent god who protects the oppressed humanity by his creative acts against the evil.
Indra and the other Devas came back to their skies Paradise grateful that they had got back their kingdom. They were happy.
Some believe that Lord Bali is supposed to return every year on the earth. Hence, Onam festival is celebrated in welcoming Bali home to his lost kingdom.

Read more of his blogs here :

Why Lord Vishnu incarnates as a Human (Vāmana)? And all about this Avatar.