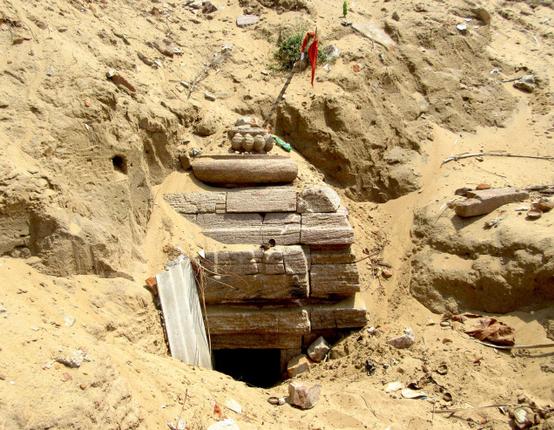 Buried artefacts of the 8th Century are emerging during renovation work of the Bateswar temple near Rushikulya rookery in Ganjam district of Odisha.

The temple is located on the coastal sand dunes around eight kms from the Kolkata-Chennai Highway near Humma.

According to Odisha State Archaeology department superintendent Sanghamitra Satpathy, with financial support of the World Bank, a Rs.1.64-crore renovation work was taken up at the Bateswar temple under the Integrated Coastal Zone Management Project (ICZMP).

Senior historian and retired head of history department of Berhampur University, Ashok Kumar Rath, who has researched on the archaeological remains of this region said the Bateswar temple as well as the newly-discovered temple on its premises belonged to the 8th Century. “The two-chambered Bateswar temple has archaeological resemblance with Laxmaneswar, Bharateswar and Shatrughneswar temples of Bhubaneswar, which were also built in the 7th or 8th Century AD,” said Prof. Rath.

According to him, this ancient temple was built during the Shilodvhav period of the Odisha history and was linked with maritime history of this region.

The Bateswar temple also has some stone inscriptions in ‘Devanagari’ and ‘Kutila’ scripts that have become dull with time. But as per the historians, these inscriptions are of later period, may be of 10th Century during the reign of Ganga dynasty.

During ancient times, ports existed at Palur and Ganjam near the Rushikulya rookery. It is felt that basing on the maritime activity in the region, an urban civilisation may have existed in the area and Bateswar temple was part of it. “More excavation around the Bateswar temple can reveal more information,” said Prof. Rath.