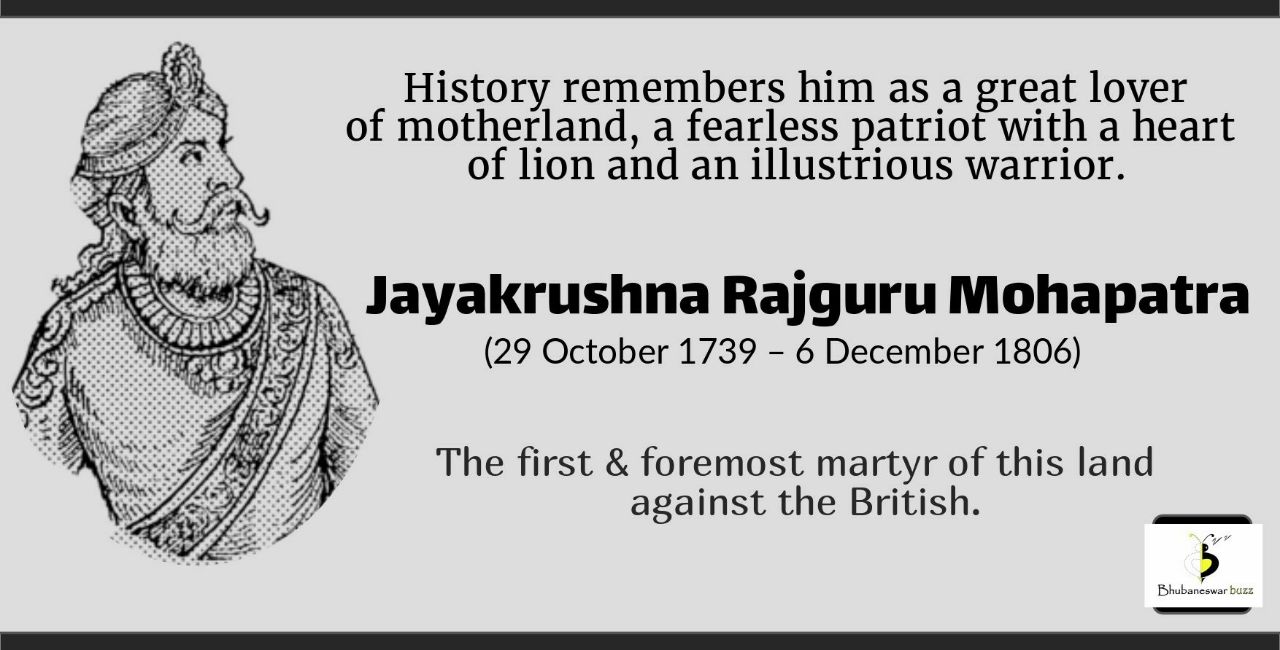 “We fight not for glory nor for wealth nor honours; but only and alone we fight for freedom, which
no good man surrenders but with his life”. These overrefined words were quoted by some
freedom fighter who is no more alive but makes us realize the vivacity and gallantry of the freedom fighters.

A lot of blood was sacrificed from Odisha for the freedom of the motherland.
When Jayee Rajguru became the first martyr of Odisha and one of the earliest in the country each one was inspired by his courage and took up arms for a battle against all odds.

Jayee Rajguru alias Jayakrushna Rajguru Mahapatra was born on the auspicious day of Anala Nabami, 29th of October, 1739 in a village called Biraharekrushnapur in the district of Puri to Chand Rajguru and Haramani Devi. Jayakrushna was born to a noteworthy and savant family. His forefathers were the advisors and spiritual teachers to the king of Khordha and were traditionally called ‘Rajguru’. Jayee Rajguru was an excellent scholar in Sanskrit and a great
Tantrasadhaka. He had mastered Vedas, Puranas and scriptures in the early years of his life that he could write thousands of shlokas with ease and was an acclaimed scholar among the pundits. He was the royal priest, commander-in –chief and the real administrative representative of the king of Khordha, Gajapati Mukundadev –II.

In 1779, Jayee Rajguru was appointed as the head of the administration and the chief of army of Khordha after the death of his father. Jayee was a lifelong bachelor and was the Chief
Minister-cum-Rajguru of king Dibyasingha Dev-II who soon died. This resulted in the minor
son of the late king Mukund Dev-II to ascend to throne of Khordha and Jayee Rajguru
acted as the regent.

When the British attacked Odisha and captured several lands and exuded notice to all the kings to accept their dominance and pay taxes, the king of Khordha never accepted their subjugation as per the advice of Jayee Rajguru. He then started writing the neighbouring kingdoms and planning strategies. He succeeded in mobilizing and instigating the Odia soldiers, the Paikas. He organized village youths and trained them in military practices and in arms and ammunition as he had paramount warfare skills and knowledge of weaponry. He used querilla warfare for the first time in India against mighty British power.

With frenzy in heart Jayee Rajguru mustered his army and occupied the four Praganas on his own with the contemplation to drive the Britishers out of his state and his country. In October 1804, a group of armed Paikas drew the sword against Britishers at Pipili. This event
alarmed the British force. In the meantime Jayee Rajguru approached all the rulers of the state to
stand together and invade the Brtishers. And consequently the kings of Kujanga, Kanika, Harishpur, Marichipur and other joined in the alliance with the king of Khordha.

The ultimate historical fight “Battle of Barunei” took place in December 1804 on the foothills of Barunei between the Britishers and the Paikas led by Jayee Rajguru. The handful of Paikas fought against 7000 strong British army by their intrepidity, battle skills and holocaust. The British tempted few locals by offering large taxes in return for information on Jayee Rajguru and as a result he was arrested and taken to Barabati fort. All his efforts to keep the king at anchor was
futile and King Mukund Dev-II was seized on 3rd January 1805. Both were sent to Medinapur jail
from Cuttack fearing further violence in the state. The British counsels considered the petition
submitted by the King from the prison and released Mukunda Dev-II and sent him to Puri for settlement.

The trial of Jayee Rajguru was conducted at Baghitota in Medinapur by the British court, and he was awarded capital punishment for waging a war against the lawfully established government of the land. He didn’t appeal for mercy and dauntlessly accepted the death sentence. On December 6, 1809, Jayee Rajguru was made shaheed in a brutal manner. The executioners tied his two legs to two different branches of banyan tree and the branches were let off splitting his body in to two parts.

This led to the end of one of the most fervent and valiant freedom fighters. The boldspirited
Jayee Rajguru made everyone spellbound by his prowess and chauvinism. The real son of
the soil Jayee Rajguru justified the quote that goes like, “freedom is an expensive gift always worth fighting for. Even if it costs anything !”