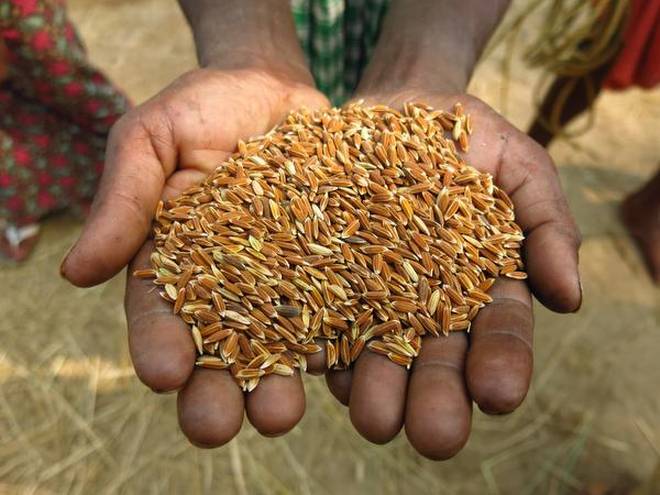 As sweet as these names sound, their aromas are sweeter. Cooking and eating scented varieties like Kolaajeera and Kolakrushna, for instance, make for a more pleasurable experience than the ubiquitous hybrids of our daily diets.

“With sarkaari dhaan, even if you have three vegetables on the plate, it does not taste that good,” laughs Gomati Raut, another Belugan farmer. “Our desi dhaan, you can eat it plain…”

India is rice country: the cereal provides daily sustenance for over 60% of Indians, and occupies the greatest cultivated area. But its primacy belies a darker story of genetic and cultural erosion.

Half a century ago, we had over a lakh rice varieties — a stunning diversity in taste, nutrition, pest-resistance and, crucially, in this age of climate change and natural disasters, adaptability to agro-climatic conditions.

As eminent rice scientist R.H. Richharia wrote in his 1966 classic Rices of India, Indian farmers knew how to cultivate rice with growing durations ranging from 60 to 200 days. There were varieties they grew at sea level, on farms 7,000 feet higher, and on a range of lands in between. Some varieties could grow in 20-50 feet of water. Others could make do with annual rainfall of hardly 25-30 inches. Yet others were saline-tolerant.

Today, much of this biodiversity is irretrievably lost, forced out by decades of Green Revolution agriculture, where ‘high-yield’ hybrids and varieties were pushed, with petrochemical inputs (pesticides, herbicides, fertilizers) and associated technologies. Such ‘superior’ varieties are estimated to constitute over 80% of India’s rice acreage.

Read more from the hindu