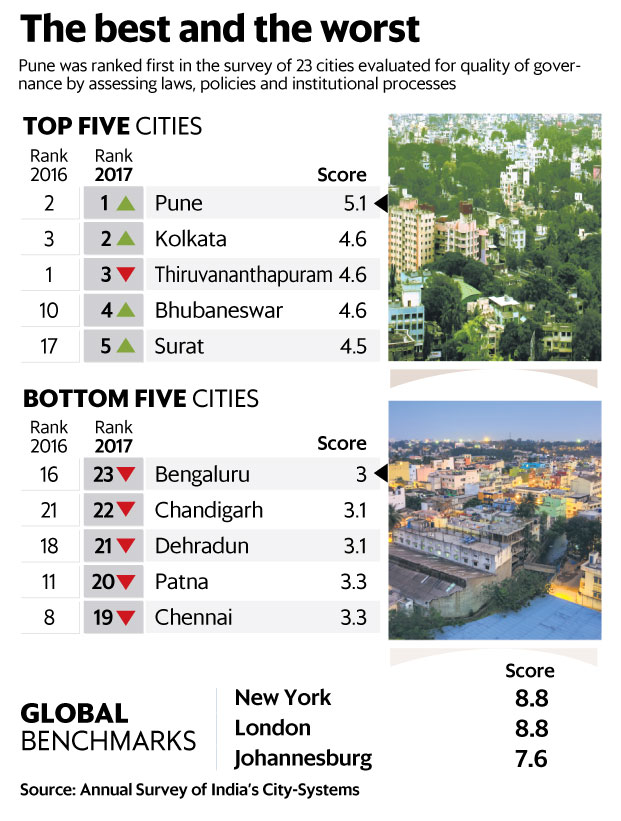 Pune came on top in the fifth edition of the Annual Survey of India’s City-Systems (ASICS), edging out Thiruvananthapuram which had topped the previous two editions of the survey. Bengaluru was ranked at the bottom.

Thiruvananthapuram dropped two ranks to be placed third out of 23 cities spread across 20 states in the survey done by urban governance watchdog Janaagraha Centre for Citizenship and Democracy, which evaluated the quality of governance in India’s cities by assessing laws, policies and institutional processes currently in place.

The key finding of the survey is that India’s cities are improving at a snail’s pace, scoring between 3 and 5.1 out of 10 in the City-Systems framework. Global benchmark cities like London and New York score 8.8 on the same framework of evaluation, while Johannesburg, a city in a similarly placed developing country, scored 7.6.

Half of the 23 ASICS 2017 cities, which comprise a fifth of India’s urban population, do not generate enough revenue internally to even pay the salary of municipal staff. A third of municipal staff positions remains vacant. And the average tenure of a municipal commissioner is only 10 months. One reason for the persistence of poor delivery despite a wide consensus on the problems ailing India’s cities is the lack of local democracy, with only two of the 23 cities putting in place ward committees and area sabhas at least on paper, the survey pointed out.