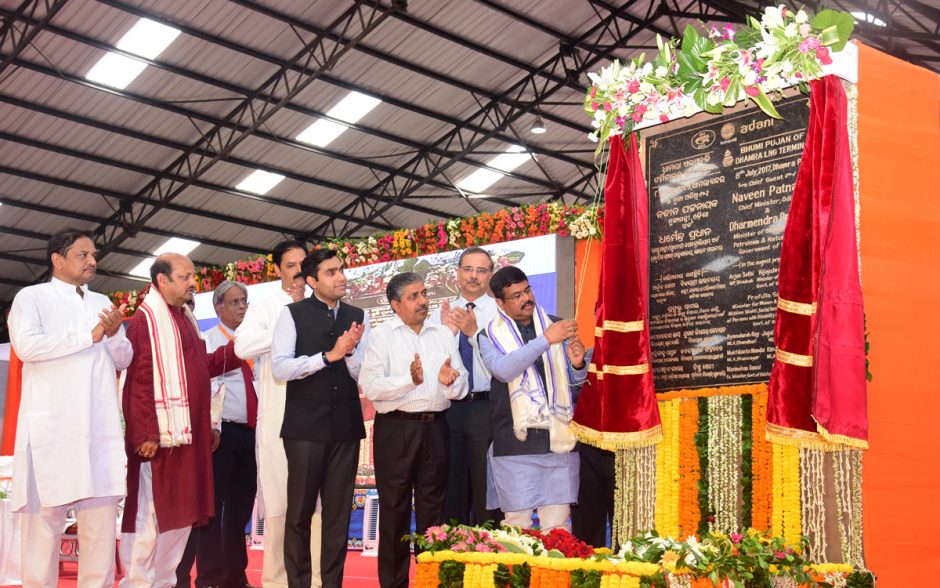 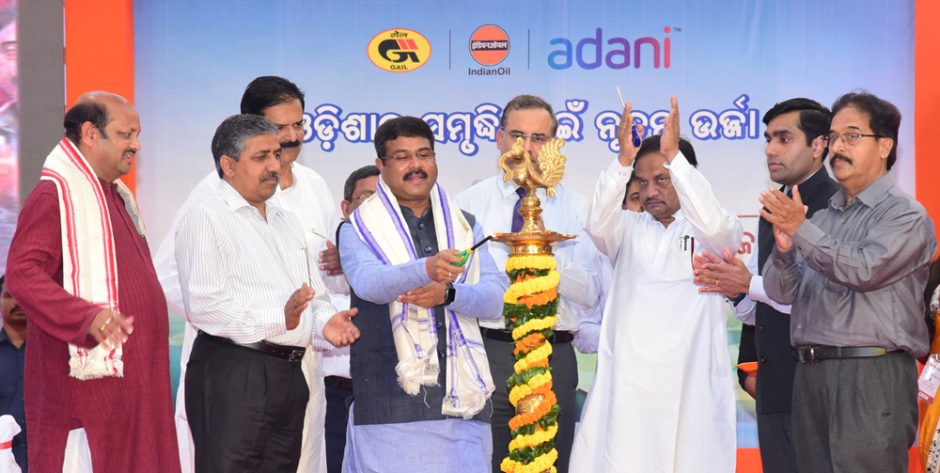 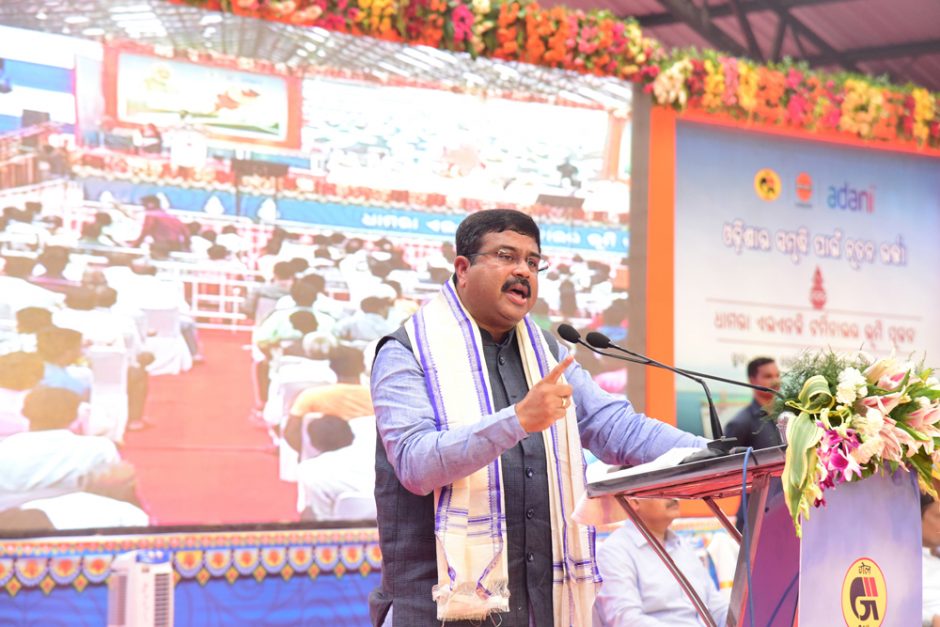 The Bhumi Pujan of the 5-MMTPA (million metric tonnes per annum) LNG (Liquefied Natural Gas) Regasification Terminal at Dhamra Port, located in Bhadrak district of Odisha, was performed by Shri Dharmendra Pradhan, Hon’ble Minister of State (Independent Charge) for Petroleum & Natural Gas, Government of India, at the project site today, amidst loud cheering & enthusiasm of over 6,000 people gathered to witness the historic occasion.

Indian Oil Corporation, GAIL (India) Ltd. and Adani Group are joining hands to set up the terminal at Dhamra port for receipt, storage and regasification of LNG. The Terminal, being built at an estimated cost of Rs. 6,000 crore, is expected to be commissioned by the year 2020-21. It will cater to city gas distribution networks and industrial hubs in Bhubaneswar, Cuttack, Angul, Sambalpur, Jharsuguda and Rourkela in Odisha. Thirteen districts of Odisha, that is, Sundargarh, Deogarh, Sambalpur, Angul, Dhenkanal, Khorda, Cuttack, Jajpur, Bhadrak, Kendrapara, Jagatsinghpur, Puri and Jharsuguda will benefit from the pipeline passing through the State.

Addressing the gathering after unveiling the Dhamra LNG Terminal foundation stone plaque, Shri Pradhan said the terminal will play a significant role in the development of eastern India. “Hon’ble Prime Minister has charted roadmap for the growth of eastern India and stated that India can’t be developed without integration of its eastern arm into the mainstream economy. Dhamra LNG Terminals a gift from Hon’ble PM Modi to change the narrative of Odisha & bring back its past glory.”

Shri Pradhan added that India is transitioning to a gas-based economy with 50% of Gas being imported through terminals located in Gujarat & one in Maharashtra. “In eastern India, Dhamra will have the distinction of hosting the first LNG terminal, which will import gas from countries like US & Qatar.”

Hon’ble MoS also enumerated the multiple benefits that will accrue to Odisha state & the region with Dhamra LNG Terminal acting as a source of employment &investment opportunities, along with access to clean fuel. He said, Dhamra will be a vital link in connecting eastern India to the gas infrastructure of the country & will  also benefit neighboring countries. Natural Gas from this LNG terminal will also be an important gas supply source to the Pradhan Mantri Urja Ganga ( JHBDPL ) Project, he said.

The natural gas from Dhamra LNG Terminal would also be supplied to various city gas distribution (CGD) networks coming up in eastern India, in cities such as, Bhubaneswar, Cuttack, Ranchi, Bokaro, Jamshedpur and Kolkata. The CGD networks would in turn cater to the requirements of piped gas for households, CNG for automobiles and clean fuel requirements of commercial establishments and industries, Shri Pradhan added.

Shri Sanjiv Singh, Chairman, IndianOil said “Dhamra LNG Terminal will usher in a green wave of growth and development in eastern India by making available clean and economically viable natural gas to fuel various sectors. We are hopeful that use of natural gas will also help in reducing the carbon footprints in the States of Odisha, Bihar, Jharkhand and West Bengal in a big way.”

The LNG terminal would also meet the gas requirements of three oil refineries of IndianOil situated in Barauni, Haldia and Paradip. The three fertiliser plants at Barauni, Sindri and Gorakhpur, which are being revived by the Government of India, will also benefit from the terminal.

Natural gas is the fuel of the 21st century owing to its inherent low-carbon intensity. And the Government of India is keen to mainstream a gas-based economy in the country.

At present, the States in eastern India, viz., Odisha, Bihar, Jharkhand and West Bengal, are not able to get the benefits of natural gas in sectors like domestic, transport, industries, etc., as the region does not have gas infrastructure by way of LNG terminals and cross-country gas pipeline grid.

The Prime Minister, Shri Narendra Modi, while dedicating the 15-MMTPA Paradip Refinery to the nation, termed it the Vikasdeep of Eastern India. Next, Pradhan MantriUrja GangaYojana, a flagship energy project, was launched by the Prime Minister at Varanasi for ensuring the flow of natural gas along the 2,540-km-long pipeline that will benefit all customer segments in the States of Uttar Pradesh, Bihar, Jharkhand, West Bengal and Odisha.

R-LNG (Regasified LNG) from the terminal will be transported through this 2,540-km-long Jagdishpur-Haldia-Bokaro-Dhamra pipeline (JHBDPL) being developed at a cost of Rs 12,940 crore for completion by December 2020