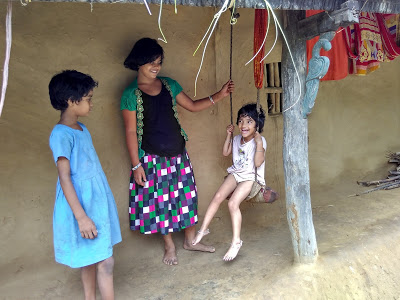 A scene from my village Tulasidia: My daughter on the swing!

Things have changed. We have come far ahead, leaving loads of rich traditions far behind and of course taking a few sheds of them that we easily could carry. In the mad exodus from culturally-rich village to materially-rich city, many adored festivals have died an unnatural death, or have at least been tainted. And Raja is perhaps one such Odia festival that has been worst affected by this city-ward stride. 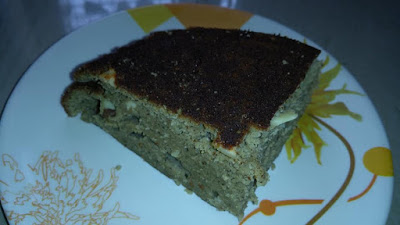 Many in city still believe, they do celebrate the occasion in the best way possible. But that impossibility factor takes away the real charm out of the festival. Swings in the play area of a municipal park can never match the swings that used to hang from a large tree with two straight bamboos and supportive threads. The number and varying sizes of the swings in villages during the Raja a few decades back can only be counted and seen in vivid memories of the past.

Waiting for the arrival of friends and family members, who had to stay away from villages, on the eve of the Raja had its own charm. I still remember how I would go to bed having a final look at the kadai loaded with sweetened barter, sandwiched with fire on top and bottom, and would get up early in the morning to sit beside my Grandma cutting the poda pitha (literally in English, burnt cake) into pieces. No convection oven in this world can bake that and match that taste. Playing kabaddibeside the river bank, collecting black berries on the way back home, playing cricket on the village fields in rain or shine, chewing betel leaves in style, flaunting new clothes – these are some of the rare things that I reminisce when the calendar points to mid of June. However best we try to recreate all that in a city life, the efforts will just fall short.

The villages now have started smelling city-like. People are slowly growing selfish much like in a city. Regards and concerns for neighbours and fellow men are diminishing fast. Self-aggrandisement seems to be the only goal.With the advancement of technology, it seems, as if the humanness has retreated to new lows. The village that once boasted of people living together in harmony has lost its inhabitants to nearby cities.

The outer shine of city life has lured all to ditch their villages – the very root that gave them wings to fly. Only the old lot who have a rather strong bond with the village soil have their unwavering respect for the roots. It is interesting to see how a generation or two later, villages would fair in this regard. But up until that, I appeal all those who have grown from a village must keep respecting the root and not ditch it with a lame excuse like no Internet connection or disrupted power supply. Never forget, those necessities alone made you look for better things that you relish now. The river that flew by, the air that you breathed, the fields that you played on, and now the memory of all that need you to be grateful to the village that mothered you.