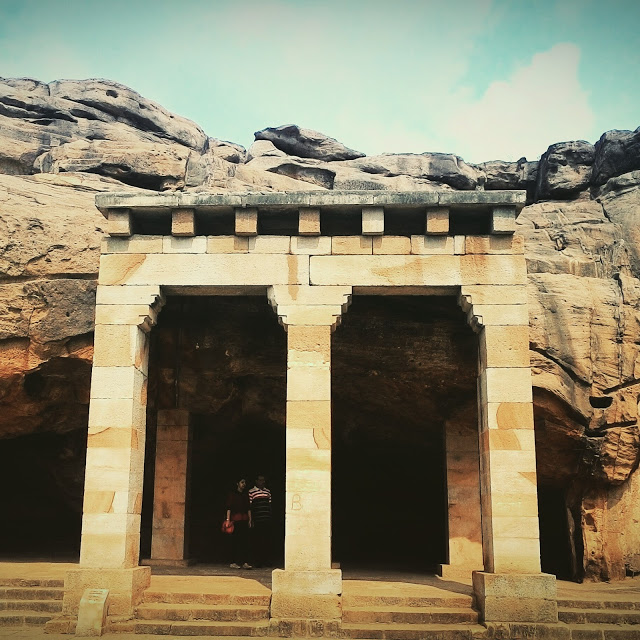 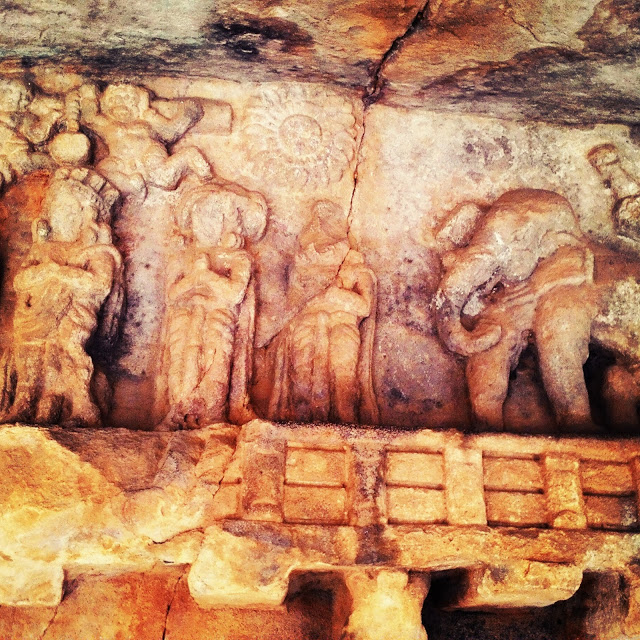 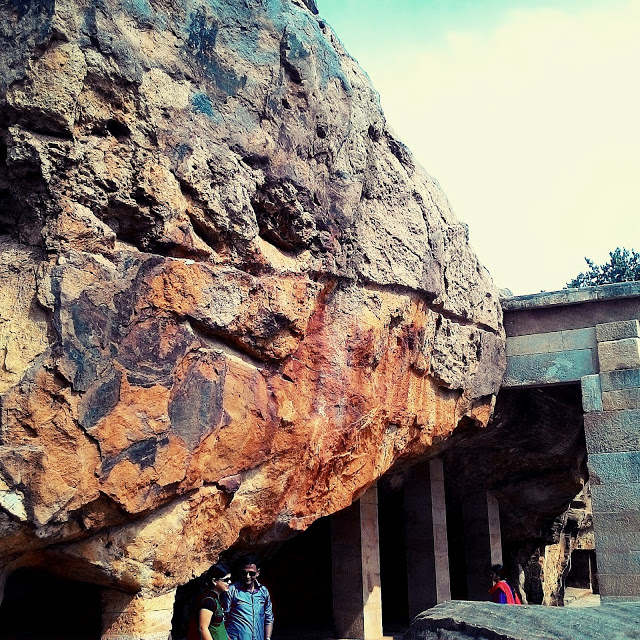 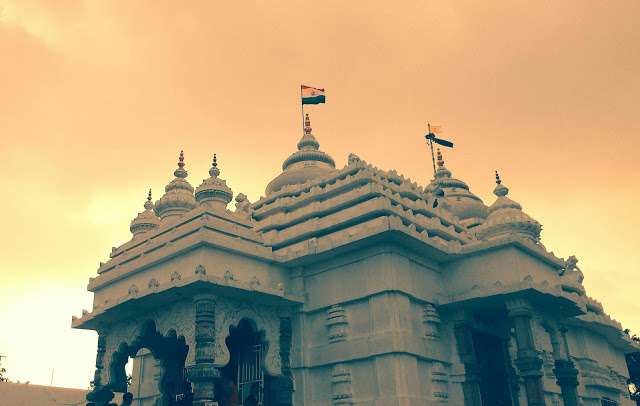 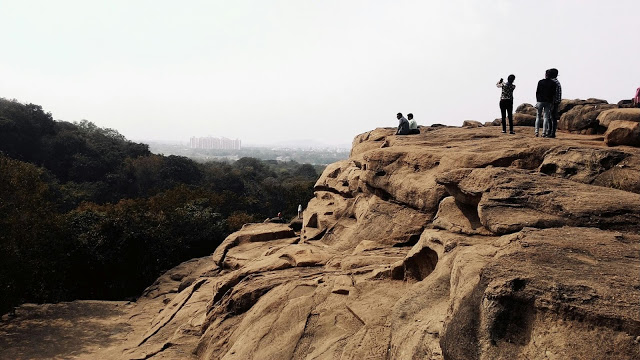 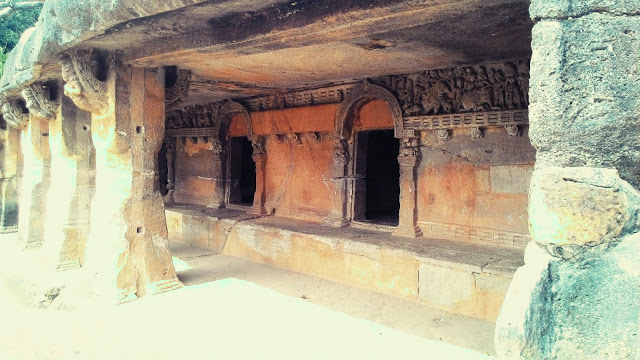 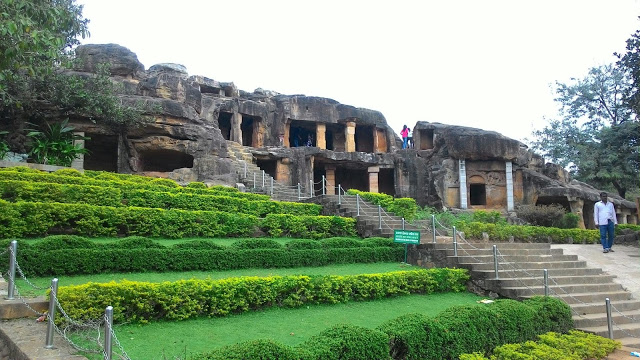 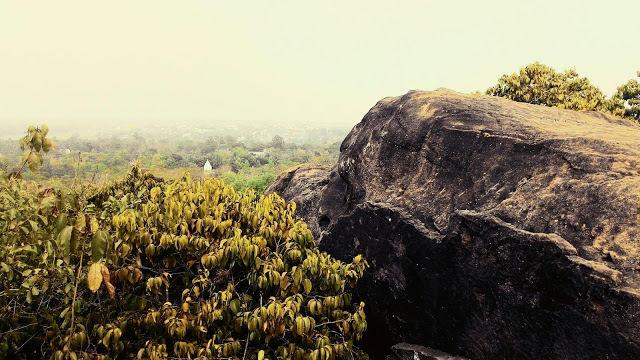 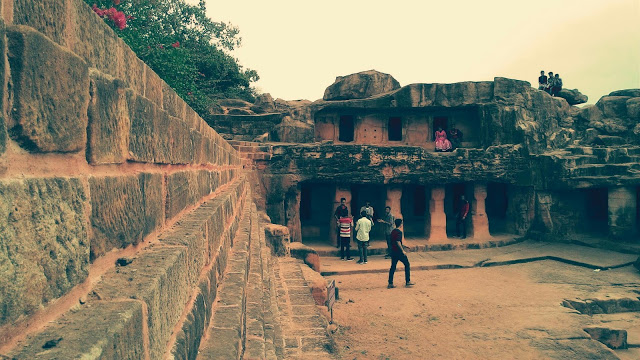 It was Sunday afternoon but definitely not an off day for the Sun. Scorching hot at beginning of February! Ah! What a promising summer it is going to be.Nevertheless , after visiting the sacred Lingaraja temple we were headed to the twin hills – Udaygiri and Khandagiri.Situated south of the city , Bhubaneswar , it were some eight kilometres away from the temple.The auto service in the city is never disappointing.Prompt and reasonable.Taste buds of our souls being already scintillated , we were hoping to discover more taste palate.

Known to be ancient Jain caves , the entrance to Udaygiri hillock gave the essence pretty much. Rugged and rocky as expected.We climbed a long slope to reach the top of a plateaued rocky bed.Lots of big rocks , of various shapes and sizes , stood scattered still.I wondered how many seasons they might have experienced.Some might have never moved an inch amidst concurrent natural phenomena.In no time , we began to feel some extra spring in our feet – climbing and posing for photos – the exuberance ignited.

A higher elevated cave stood in front but we decided to take our usual detour around it.On the way we came across some houses carved out from the hill sculpted with Jain deities.Not so well finished designs or sophisticated either.But the sylvan essence gives it a different taste.Definitely worth to be framed.

A forestry area behind the cave – it seemed the adrenaline had infused the adventurous drug and we reacted.Sliding through a narrow passage we moved bustly through the green haze.As if it were a maze or like the hidden world of “Chronicles of Narnia” . No one knew where we were heading to and suddenly we reached a dead end.We had reached the other side of the hill giving the western view of the city in the distant.A moment of course – overlooking the downward plantations standing as if at the edge of the world , we let the ambience sink in , the serenity unexpectedly disposed by our rollicking footsteps seemed to regain fortitude. The peacefulness to breathe the natural air rather than our mundane polluted gases is inexplicable.

The spiritual appetite had received its reward. Now it was time return to the cave.Slithering through the bushes we carved our way back to the top of the highest plateaued cave.A clear view of the city on one side and its counterpart, the Khandagiri , the taller one , lay on other side.Jumping off rocks and boulders as well intense photography sessions went on. Need not to mention , the selfie-maniacs hovered all around. The reminiscent caves were covered too.

We did not spent much time on Khandagiri  , which was rather more populated because of the temple at the top.Lots of visitors had flocked there.The climb was much steeper.A little chaos – a group of langurs huddling around – children tempting them , crowded places had never been my recipie. Nevertheless we quickly moved to the temple , not so architecture – rich , made of white marble that housed a Mahavir statue. As it was taller , we could get a better view of the city – an eagle’s view perhaps.Ruins of several small caves were encountered on our way down.

The light was getting dim in the distant horizon and the hills reflecting a more blunt, rusty gaze – the reddish nature of the red sandstones more prominent then.
With camera full of snaps , heart overwhelmingly satisfied to his nurturing mother Nature, it was time to depart.