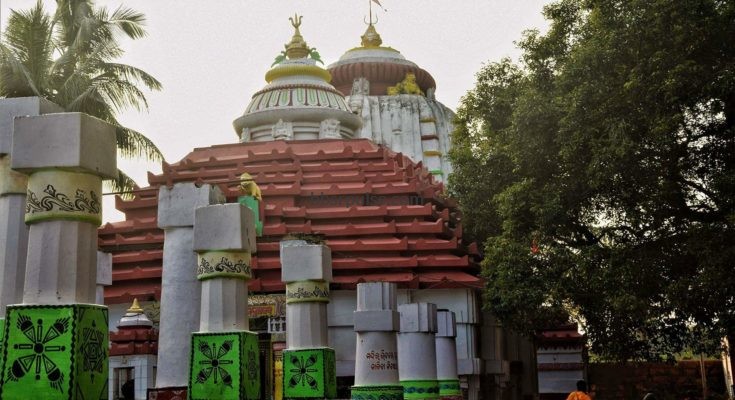 Sovanesvara is a 12th century heritage site built by King Anangabhima Deva II (1190-98) of Ganga dynasty. This artistically designed Hindu temple is situated on the left banks of sacred Prachi river (a tributary of Mahandi) at Niali block in Cuttack district, around 45 kms from Bhubaneswar. It’s a protected monument site of State Archeology Dept. The living temple has a presiding deity by the name Harihara, the fused representation of  Vishnu (Hari) and Shiva (Hara). 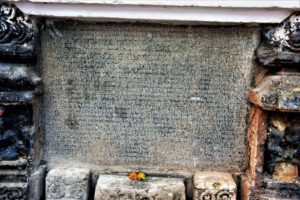 The temple facing east is of 57 ft height & stands on a low platform. Its rekha vimana & pidha jagamohana shows that its Kalingan style architecture. The detailed carvings on the sandstones of nayikas, astadikpalas, chamunda, gaja-vidala, erotic couples etc can only be felt on visiting shrine which is inside a village, surrounded by greenery & tranquility prevailing in the premises. A remembrance inscription, similar to that of Anant Vasudev Temple’s inscription, probably in Odra-Magadhi script on the eastern wall of the jagamohana (prayer hall) records that the temple was built by a Nagavamsi king named Vaidyanatha, most likely a vassal of the Ganga rulers and he possibly renovated, repaired or maintained the temple after the fall of the Ganga rulers, as evident from the Bada portion (lower roof of the temple).  The inscription looks similar to Anant Vasudev Temple’s inscription & the local priest says that messages have been inscribed in around 26 languages on the stone. The temple is believed to have a natya mandap (dance hall rarely noticed in a shiva temple) at the main entrance of the compound & one mukti mandap. The meghnad pacheri (outer protective wall) made of laterite looks intact & the lingam is worshipped inside the garbha griha (sanctum sanctorum), guarded outside by Jaya-Vijaya, the two demigod door keepers (dwarpal).

The name Sovanesvara may loosely mean beautiful god (sovan+ishwar). Ancient maritime sailors (sadhabas), depended on his blessings to save from all adversaries. Lord Sovanesvara had once defeated one yogini by the name Chandra ghanta Harachandi, since she was creating problems for the sadhabas.

The main festivals observed here are related to Lord Shiva like Mahashivratri, but Vishnu related festivals are also celebrated here. Many of the sculptures have lost their finesse to erosion caused by wind and water logging. There is a temporary museum inside the compound of the temple displays loose sculptures found in & around the site. Some Vishnu idols (Madhava) have been shifted from the nearby Madhava temple to Sovanesvara to prevent the idols from being demolished by Moghul attackers. 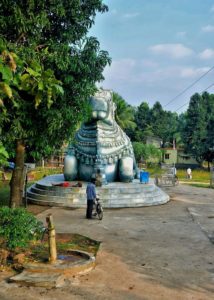 Eight such beautiful images of Madhava and one image of Varaha are kept inside the temple compound. There’s one temple kitchen room inside the compound which is used to prepape anna prasad for disciples. A mega size Nandi has been made recently at the entrance of the main gate which is an added attraction.

How to Reach :- BBSR>Phulnakhara (take right side diversion from Cuttack NH)>Trinath Bazar> Raipur (Ctc)> Kuranga> Badajharilo>Sundargram>Bagalpur>>Adaspur Bazaar>Kantapada>Niali. The roads are perfect for cyclists to have a try. There’s even a signage of Sovanesvara on the entry road to the village.

I’m Taranisen Pattnaik, originally from Aska (Ganjam). I grew up in the capital city of Odisha – Bhubaneswar. An MBA by qualification, an Accountant by profession, but a freelancer by interest with phillumeny (matchbox collection) as my hobby. I like going to places, meeting new people & capturing the moments through my camera which helps me in my storytelling.