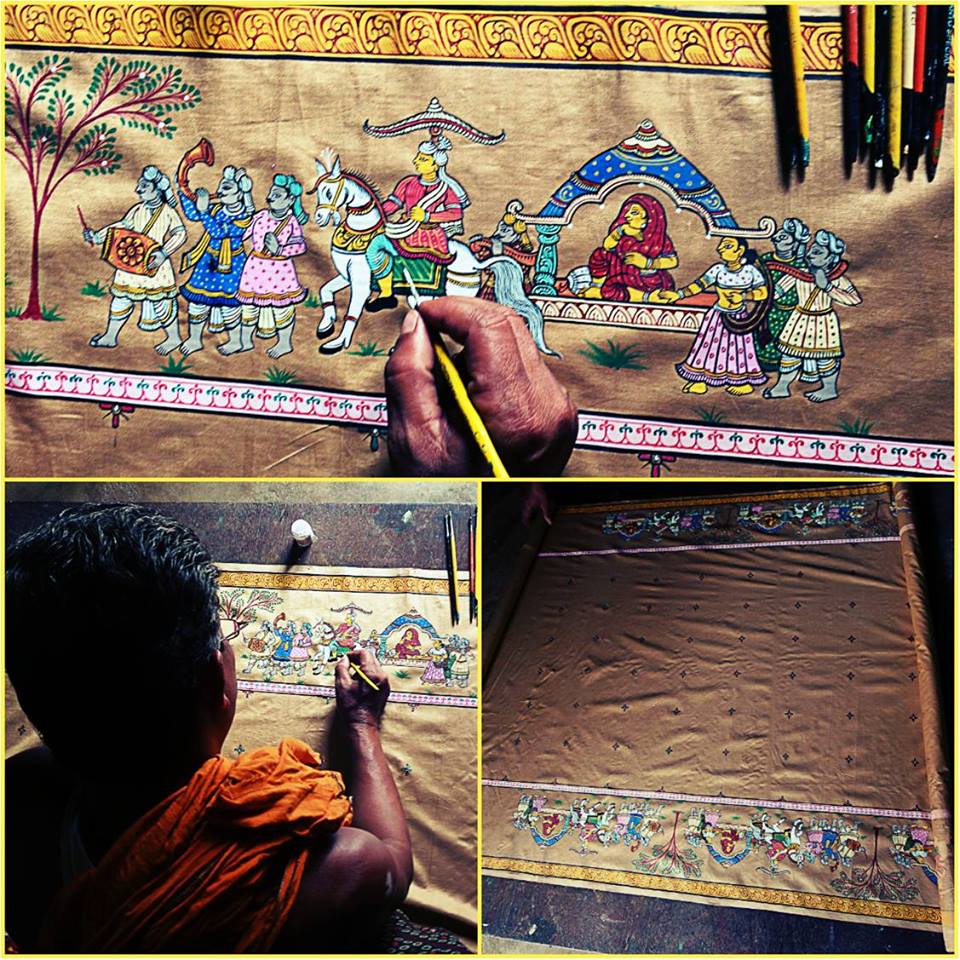 Would you believe me if I told you that the best art I’ve ever seen was at a village in Odisha? Raghurajpur isn’t a place many art aficionados visit, and it’s certainly not part of the Biennale circuit, but it boasts an unusual and thriving art scene. The walls of every local home are adorned with sketches. Inside, a range of handicrafts that have been created by the family are available for the few tourists who arrive here to purchase. Each household has something different to offer: if one specialises in miniature idols, another makes papier-mâché animals. A third boasts brightly painted coconuts depicting the Hindu god Jagannath. As you walk around the village on a sunny afternoon, it seems as if everyone here is an artist: a young man is sitting outdoors, painting yellow strokes on a fist-sized papier-mâché tiger, another is quietly assessing his geometrically precise drawings, an older woman is bent over a bird made of clay.

Raghurajpur is best known for Pattachitra, a detailed style of painting done on cloth or palm leaf that is believed to go back more than a thousand years. Colours extracted from natural substances such as burnt coconut shells are used in the paintings, the subjects of which are usually mythological stories. It’s a superbly intricate craft—one that takes patience, focus and years of painstaking practice.

Raghurajpur is among more than 50,000 villages in Odisha, one of India’s poorest states. In a landmark move in the late 1990s, the state launched a rural-tourism initiative, designed to attract travellers to experience Odisha authentically and to contribute to its local economy. It’s no surprise that the art hub of Raghurajpur was the first to be selected as a Heritage Village. Of course, rural tourism takes many forms; you can simply stroll through a village and buy handicrafts, knowing that you’ve supported the local community. But it should, and does, go deeper here.

In Raghurajpur, the arts have always been such an integral part of daily life, it’s important to understand the culture and heritage of the area in this context. But it is also about “engaging local communities to tell their story,” said Pulak Mohanty, co-founder, Grass Routes Journeys, our tour operator. Grass Routes offers travel experiences in rural Odisha centred on sustainable and responsible tourism. “Travellers are keen to go beyond the temples and national parks,” Pulak explained. There is certainly more to experience for those willing to forgo the usual trappings of holidays: unspoilt landscapes (but almost no five-star hotels from which to enjoy them), adventure experiences (spot dolphins and birds from a makeshift camp on the banks of the lake) and, of course, ancient art and craft (the homes in Raghurajpur are practically living museums). “Plus,” added Pulak’s colleague Claire Prest, “rural tourism helps give the villagers a sense of pride in their skills, which are often labelled as backward by mainstream media.” 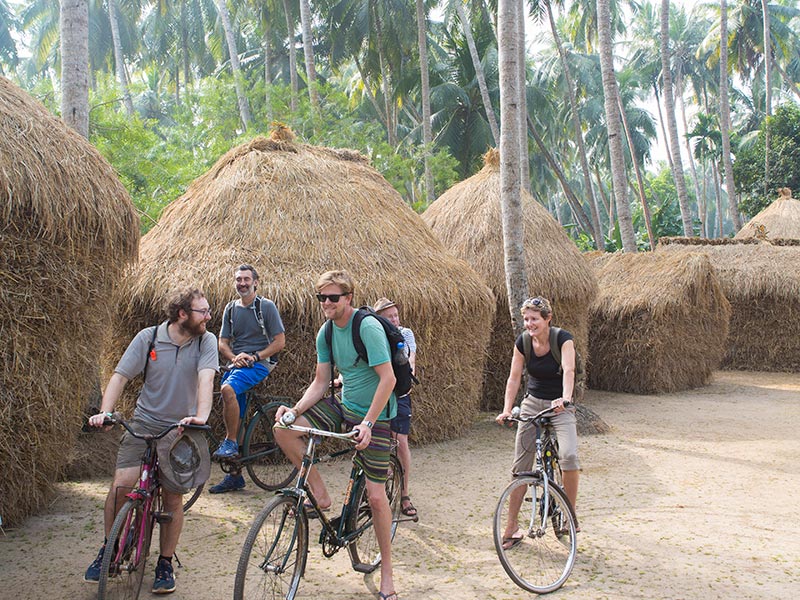 It’s definitely a chance to do things differently. For example, although Raghurajpur is just 12km from Puri,
accessible via NH 203, we rode scooters and bicycles down narrow rural backroads instead, past swaying palms, rice fields and mud huts. Led by our guide, Niranjan, our group (mostly tourists from the UK) wound its way down the pebbly, uneven path. Soon, we stopped at a small stall for chai and chhena poda (a sweet made of curdled milk) and swapped stories. England-based Emma had recently lost her job and had signed up for a trip to India to cheer herself up (Odisha was part of the package). And Jim, who was retired, just wanted to see something he’d never seen before.

He’d come to the right place, I thought, as we entered the home of Kalu Charan Bariki, a Pattachitra artist in Raghurajpur who’s won a state award for his work. On his terrace, he showed us how he prepared the canvas, pounding tamarind seeds with a stone, boiling them in water to make gum, smearing this on a piece of cotton cloth, then drying the cloth and polishing it with stones to form a smooth, hard canvas. His work was exquisite: simple paintings of small trees, carpet-sized depictions of the 10 avatars of Vishnu, the life cycle of Krishna, the Ramayana and the Jagannath yatra. But it was the Pattachitra on palm leaves that truly fascinated me. Bound like Japanese fans, each one unrolled into a square sheet with up to 10 circular paintings. Each circle was divided into semicircular flaps that opened up into two more paintings. The first one featured a mythological character, the second, erotica.

Niranjan explained that Pattachitra is Kalu Charan’s only source of income. He and other artists sell their work directly to tourists, as well as to middlemen who help it reach retail outlets in cities such as Puri. They also participate in government-organised exhibitions across the state. They charge between Rs350 and Rs35,000 for a piece of work, making around Rs2.5 lakh in a good year. Rural tourism has the potential to up this figure—by bringing buyers to them directly, it can reduce the time and money these artists have to spend on travelling for exhibitions and sales, as well as commissions to middlemen.

Outside Kalu Charan’s home, I met Mariana Paquin, a participant in the Raghurajpur International Art & Culture Exchange (RIA/CE), a non-profit residency that enables artists from around the world to interact with local craftspeople, fostering an exchange of skills and ideas between them. She introduced me to Sashimani Maharana, a teacher at the programme, and at 78, one of the oldest women in the village. Sashimani is Raghurajpur’s last living expert in making toys out of cow dung. Such is the respect the villagers have for her and her craft that they are planning to build a museum in her honour. That night, in the air-conditioned comfort of MAYFAIR Waves, Puri (doubles from Rs13,000, including breakfast and dinner), I reflected on this fact: the villagers weren’t producing art purely for the sake of profit; they were deeply and genuinely passionate about their ancient tradition. They felt privileged to be part of continuing it, and frankly, I felt honoured to partake of it in my own way.

Less than 24 hours later, I questioned how truly connected I was to the villagers. My home for the night was a tent on the Chilika Lake island of Berhampur, an hour away by boat from Satapada, 48km from Puri. The campsite was completely off the grid—no cell reception and just two radio stations for entertainment. Being eco-friendly, the toilets used no water. There was a plastic bottle filled with a mix of ash, lime and coir peat, a fistful of which was to be sprinkled on the waste so it could be used as fertiliser.

That said, the boat ride was lovely, the lake filled with fishing rods and nets, the smooth grey backs of Irrawaddy dolphins glinting up ahead, a perfectly synchronised formation of birds above. We were off to Rajahans Island, a designated reserve area near Berhampur. While the environment is protected by law, the beach was littered not just with bits of plastic and glass bottles, but also, heartbreakingly, dead Olive Ridley turtles—a result of unsustainable fishing, pollution and climate change. That evening, as fresh prawns and fish cooked over a barbecue, I sat outside and gazed at the lake, trying to make sense of this complicated place, where much good is happening, yet much clearly remains to be done. The inky blanket of sky soon spread all around, a crackling bonfire soothing us to sleep.

Early the next morning, I looked out at the lake and spotted a man on Rajahans washing his clothes. It was so quiet, I could actually hear the fabric being beaten against the rock. Silence in this remote part of India was loud, I realised, a couple of hours later, when I headed to the wetland village of Mangalajodi and checked intoGodwit Eco Cottage (doubles from Rs2,600): the absence of air-conditioning and TV amplified every tiny noise. Later, on a sunset birdwatching cruise across the wetlands of Chilika Lake, the only sounds were the oars lapping against the water and the calls of birds.

Home to around 200 species of migratory birds between October and March, Chilika is one of India’s best places to spot egrets, herons and storks, some from as far as Iran and Siberia. For years, Mangalajodi was the hub of bird poaching, until Nanda Kishore Bhujabal, a social worker with Wild Orissa, an NGO working on conservation, intervened in 1997. He educated villagers on the need for conservation, while also helping them find alternative means of livelihood. His efforts led to the birth of the Sri Mahavir Pakshi Suraksha Samiti, a wing of Wild Orissa that partnered with the state’s forest department, the Royal Bank of Scotland and Indian Grameen Services to create livelihood schemes and avifauna education programmes that turned poachers into protectors—and biodiversity experts.

Read the full article by clicking on link

Did you know Bhubaneswar Buzz is only portal covering Odisha to have more than 15,000 followers (consistent) in top 3 Social media platforms i.e. Facebook,Twitter and Instagram