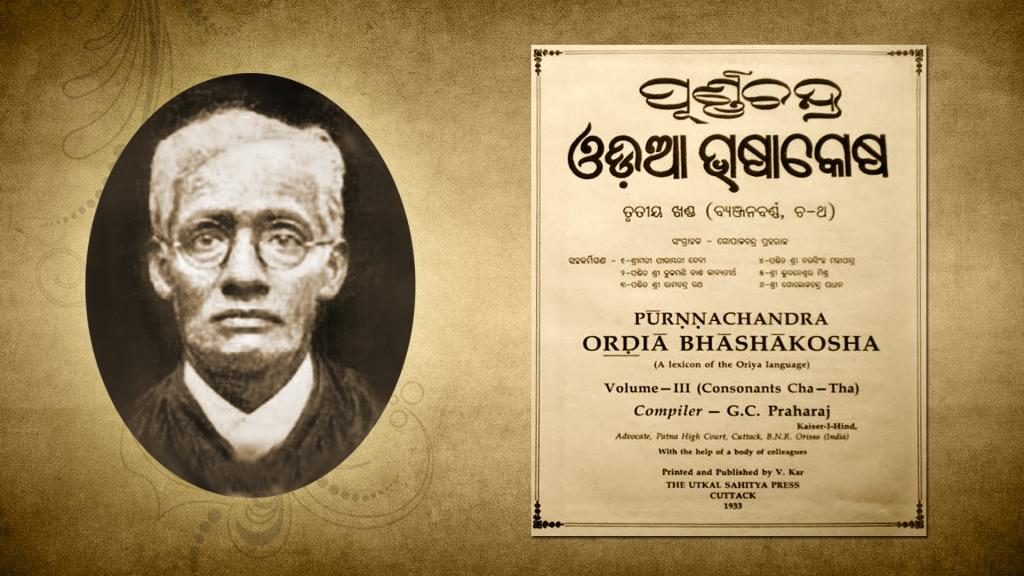 The Purnachandra Odia Bhashakosha is a monumental 7 volume work of about 9,500 pages published between 1930 and 1940. It was a result of the vision and dedicated work over nearly three decades of Gopal Chandra Praharaj (1874-1945). Praharaj not only conceived and compiled the lexicon, he also raised the finances for its printing by pains-taking collection of public donations, grants and subscriptions. He also supervised the printing and the sales of the published work.
Briefly, the Purnachandra Odia Bhashakosha is an Oriya language lexicon listing some 1,85,000 words and their meanings in four languages – Oriya, English, Hindi and Bengali. In addition, it is replete with quotations from wide ranging classical works illustrating the special usage of various words. It also contains much specialised information like the botanical names of many local plants, information on asterisms and constellations and also includes many long articles on various topics as well as biographies of personalities connected with Orissa’s history and culture. On the whole, it is an encyclopedic work touching upon various aspects of Oriya language and Orissa and upon many topics of general interest.
Like all major historical works, the making of the Bhashakosha is a fascinating story full of dream and dedication, sweat and tears. The story of its maker Praharaj, a lawyer by profession, is equally so – it starts with a delinquent (almost decadent) youth and ends with a tinge of blood (he met with an untimely and unnatural death), with achievements and heartburns in between.
The post-production story of Bhashakosha is more bathed in tears. Ridiculed and reviled by many during the production itself, a good fraction of the printed copies were destroyed unbound and unsold. Many copies were still available in the libraries of the princes who had patronised the work and most of these copies were pawned away unredeemably or sold off cheaply when bad days invariably visited the owners.
The copies surviving today are rare and are in rather fragile and worm-damaged state. While the older generation holds the work in high regard and reverence, the present generation is hardly aware of its existence and knows even less about its contents. Interested language-loving individuals or researchers can only dream of having a personal copy.
Digitalized by Srujanika.org