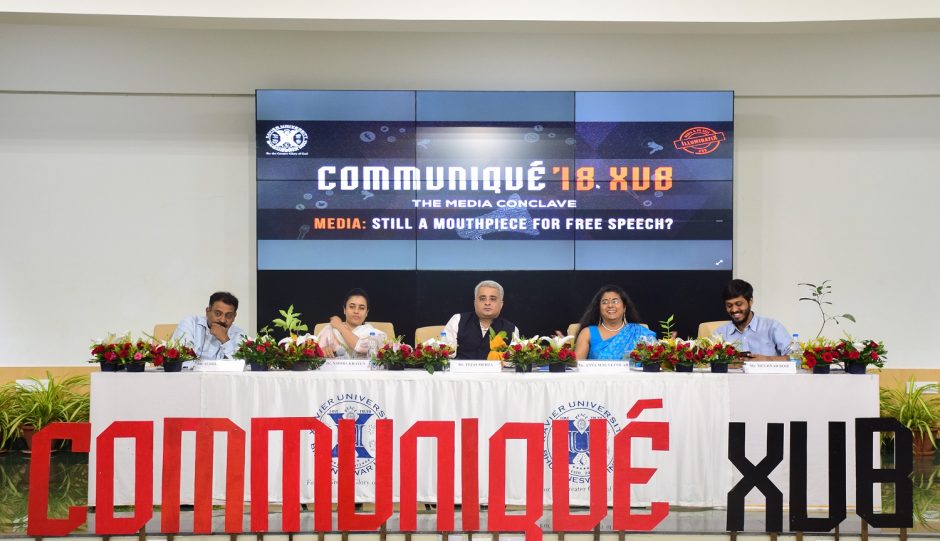 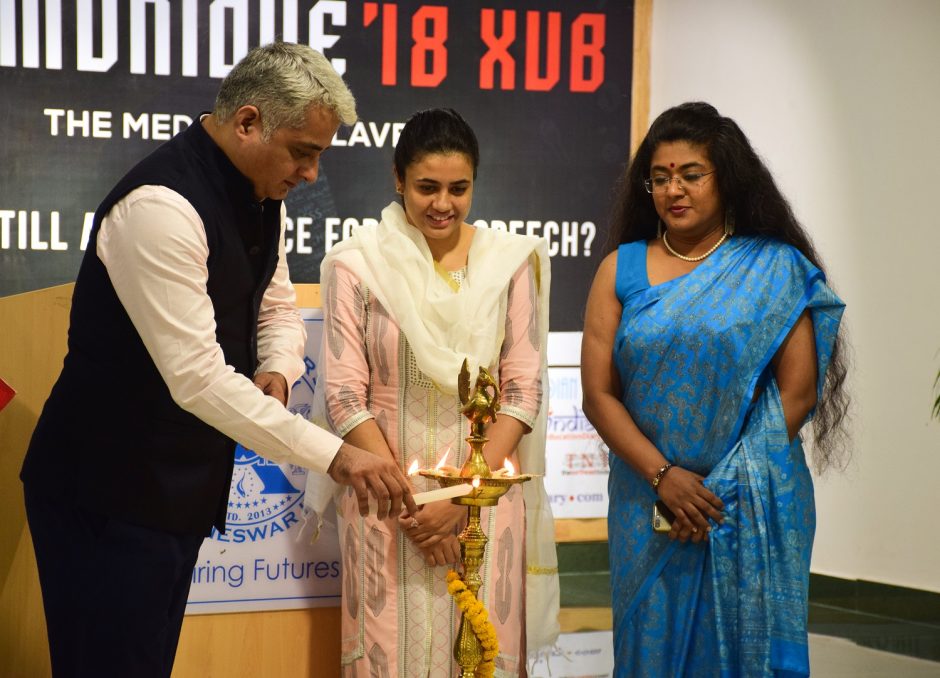 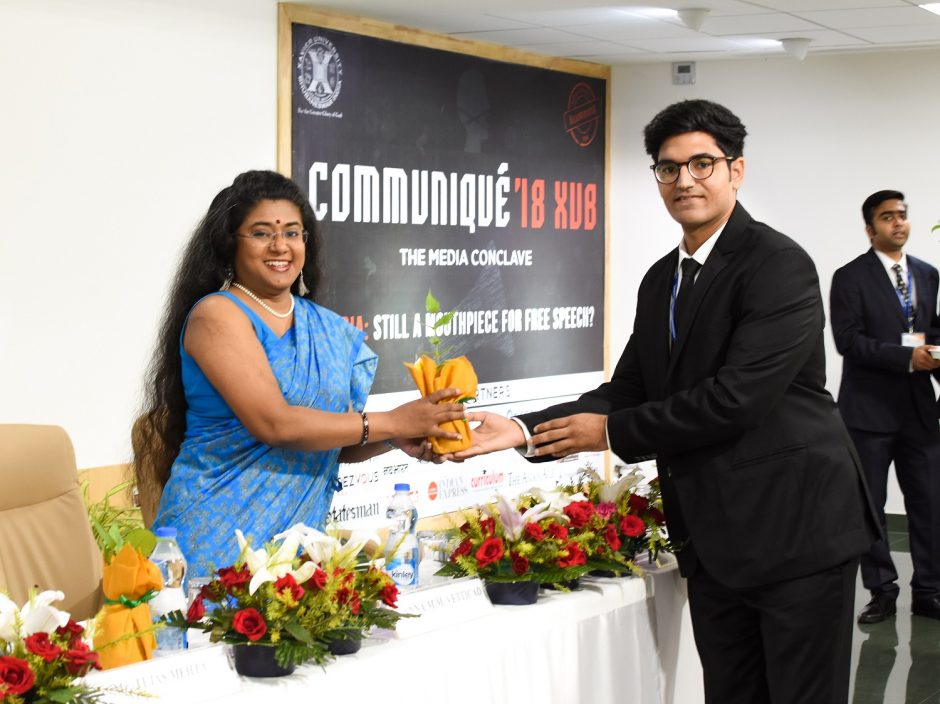 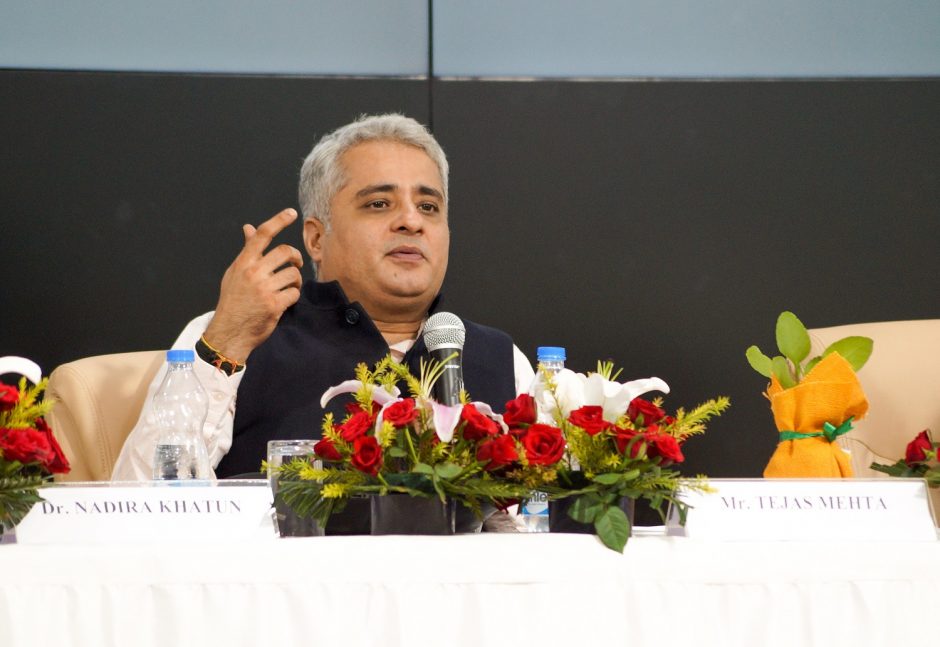 IlluminatiX – the Media and PR Cell of Xavier University, Bhubaneswar hosted its flagship Media Conclave – Communiqué’18 XUB. The conclave revolved around the theme of Media: Still a Mouthpiece for Free Speech?

The event was graced by four eminent media influencers, including Meghnad Bose (Senior Correspondent, The Quint), Anna M.M. Vetticad (Independent Journalist and Author), Tejas Mehta (Communications Trainer and Political Commentator, Former Bureau Chief and Anchor at NDTV) and lastly, Sudhi Ranjan Sen (Editor, India Today Group). They, along with Prof. Dr. Nadira Khatun, the Moderator for the day, inaugurated the conclave by lighting the ceremonial lamp and briefed about the importance of the theme.

The moderator for the conclave, Prof. Dr. Nadira Khatun, opened the forum by discussing in brief about the theme. She started by talking about her own experience as a media student, and then commenced the conclave by inviting the esteemed speakers on to the podium, which was appropriately rechristened as the Free Speech Zone for the day.

The first speaker for the day was Mr. Sudhi Ranjan Sen (Editor, India Today Group). He started talking about the neutrality of media these days and told about the shift of media from ‘Also Profit’ to ‘Just Profit’. He quoted that “Good Media cannot exist without the support of people” and that “Free Content isn’t always the best way to get your news”.

The next speaker in the Free Speech Zone was Mr. Tejas Mehta (Communications Trainer and
Political Commentator, Former Bureau Chief and Anchor at NDTV). Initially he talked about the
two major players: Media and the Controllers. He further pointed out the fact that half-truths,
censorships and political bias have become the rulers of the show these days, and to be
completely neutral should be a journalist’s USP. He concluded by quoting that “In the political
context, we are not enemies, we are just rivals” and that “A journalist’s credibility depends
upon his/her neutrality”.

The third speaker for the day was Ms. Anna M.M. Vetticad (Independent Journalist and
Author). She began by mentioning that politics is not a simplistic term and that the curbs on
Freedom of Expression are always put on the vehicles of culture. Following this, she ended by
stating that a whole gamut of opinions is being oppressed and that the Freedom of Expression
has to include the Right to Offend.

Communiqué’18 XUB, for its final speaker, had Mr. Meghnad Bose (Senior Correspondent, The Quint). He presented numerous examples from the world of media regarding the political compromise and mentioned that we should learn to question the media for all its omissions and commotions and posed a concluding question asking, “Is self-censorship today also not an act of the government?”

The sessions were followed by an interactive and enriching question and answer round in which the students asked intricate questions about the current media industry, and to what extent does media acknowledges the creation of a Free Speech Zone. This event also marked the release of Xperience- the Monthly Newsletter of XUB, presented by IlluminatiX – the Media and PR Cell of XUB. Following this, the winners for Communiquiz – a Quiz Competition and Critique- a National Article Writing Competition, organized as a run up for Communiqué’18 XUB, were awarded with their cash prizes and certificates by the esteemed panel. The conclave was concluded by a vote of thanks by Mr. Ashutosh Chaudhary (Co-Ordinator- IlluminatiX XUB).