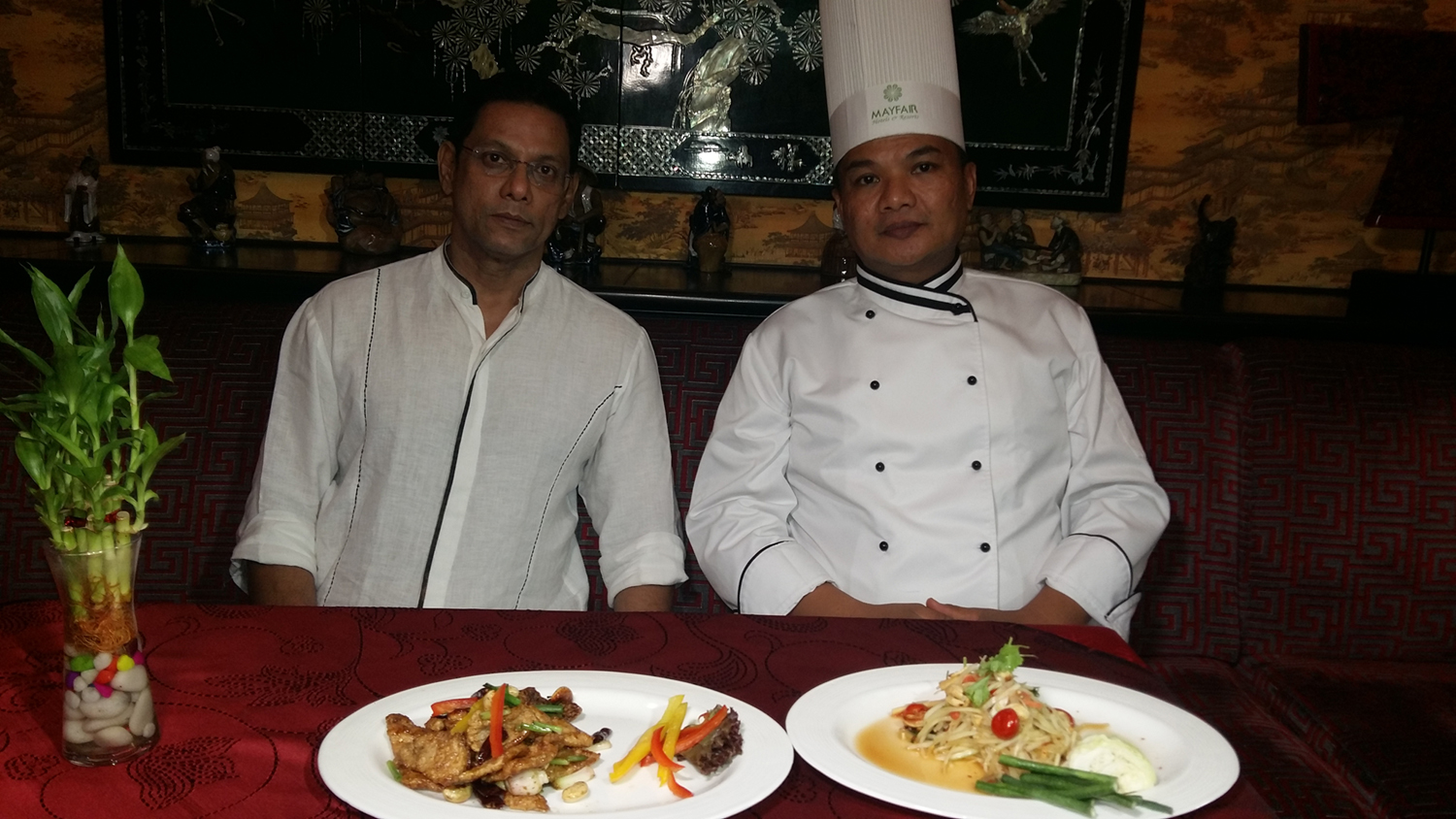 The festive season has indeed begun at the Mayfair Lagoon for the month of December with the start of the Oriental Food Festival at Lemon Grass – the signature restaurant at the hotel. The festival starring some great traditional dishes such as the Som Tam salad, Tom yum soup and Phad Thai noodles as well as newer delicacies such as the LarbKhai – a minced chicken salad, Charcoal grilled prawns with oriental herbs, Vietnamese grilled chicken and Martabak – a grilled chicken pancake. For the vegetarians, there is plenty on offer as well including the Vietnamese summer rolls, braised shitake with pakchoi and the TahuLaad – a crispy tofu with vegetables in a special sauce that seems to be a crowd favorite.

The Resort Manager, Mr. Dilip Chhabra said that was a great way to start the festivities in the city and give the crowd a sampler of things planned for new years at the Mayafair Lagoon. “We are indeed happy to have Chef Suphot here with us to share his knowledge and closely guarded recipes in this cultural exchange. He brings with him stories on the origins of the dishes and spoke to our Chefs about the importance and roles of various new ingredients that we are introducing into our recipes with the aim of giving our patrons something new to savor.” Chef Suphot said that this was his first visit to Bhubaneswar and has always admired the Mayfair hotels chain which has consistently been working on the oriental food served across the group of hotels.

As if all this was not enough temptation to drop in for a meal at the food festival which is on till the 13th of December, Uber – the App based taxi service has also come on board to provide a free ride to new users coming to the Mayfair Lagoon for the food festival. All users will need to do is punch in the promo .code “MAYFAIRHOTELS” and avail a ride worth Rs. 300/-. Tables are recommended to be booked in advance and can be done by calling Sriraj on 9238413032

About The Mayfair Lagoon

The Mayfair Lagoon is the only five star deluxe hotel in Bhubaneswar and besides having some of the most opulent rooms, villas and suites – most of them facing the sprawling Lagoon that is the centre of the hotel also has some of the best dining options in the city. NakliDhaba and Lemon Grass are the signature Indian and Chinese restaurants; Tea Pot for the best buffets in Bhubaneswar; Chimes by the Lagoon for grills; Kanika for authentic local food of Odisha; Mama Mia for Continental, Bakery and Confectionaries, Super Snax for South Indian and chaats; Baron and Baroness – the city’s classiest bar and The Cellar – with the largest dance floor and best ambience in the Bhubaneswar.