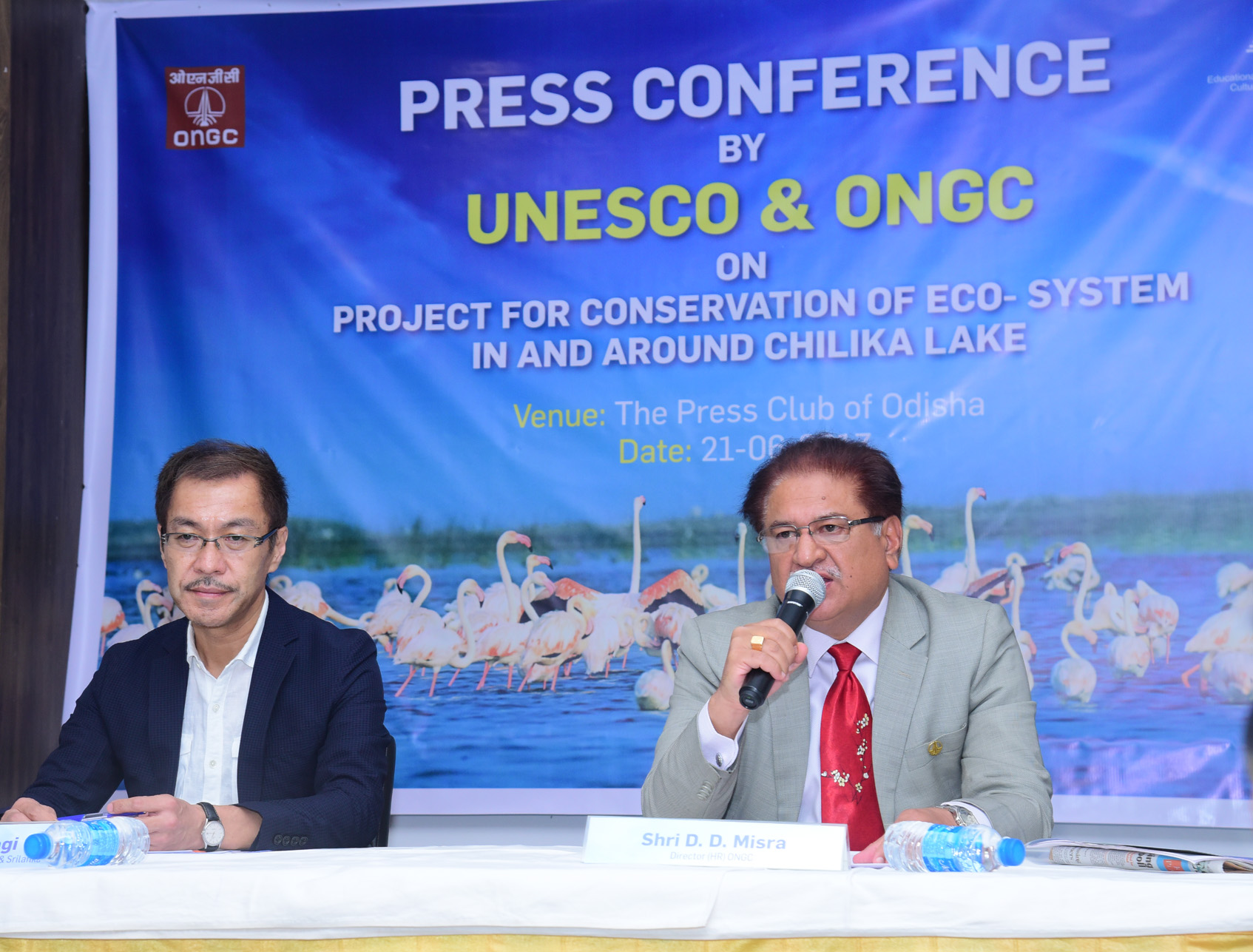 A press conference was held by Mr. Shigeru Aoyagi, Director – UNESCO for India, Bhutan, Maldives & Sri Lanka and Mr. D. D. Misra, Director (HR), ONGC on the project for conservation of eco-system in and around Chilika Lake area taken up by ONGC in partnership with UNESCO today in Bhubaneswar.

With the objective to declare Chilika Lake as a UNESCO World Heritage Site and bringing Managalajodi, the Bird Watchers Paradise to a state of global recognition for its conservation measures for eco system, ONGC has taken up this ambitious project. A preliminary survey was done by the joint-team of ONGC and UNESCO comprising of Shri Shigeru Aoyagi, Director, UNESCO and Shri D. D. Misra, Director (HR), ONGC, accompanied by Ms. Panchami Manoo Ukil, Founder, Bhubaneshwar Bird Walks, who visited Mangalajodi wet lands and surrounding villages on 20.06.2017 to have first hand understanding of the conservation issues of the area. Officials and representatives from Local Administration, i.e Block Development Officer and Sarpanch also accompanied the visiting team.

As a result of interaction with various stakeholders in the village and local officials, certain focal areas were identified to begin with so that the efforts may finally lead to declaration of Chilika Lake as UNESCO’s world heritage site. To begin with, various CSR activities are proposed to be taken by ONGC in Mangalajodi Village.

Subsequently, the team called on Shri Dharmendra Pradhan, Hon’ble MoS(IC), P&NG, Govt. of India on 21.06.2017 and apprised the Hon’ble Minister of the visit. Hon’ble Minister appreciated the efforts made by ONGC and UNESCO for comprehensive development of the eco-system of Chilika Lake, in particular, the wetlands of Mangalajodi, which is intrinsically intertwined with the conservation of migratory and endemic birds.

Shri Shigeru Aoyagi appreciated the interest shown by the Hon’ble Minister in conservation efforts and assured that he will also put in his best efforts to enable declaration of   Chilika Lake as UNESCO’s World Heritage site for which a Comprehensive Dossier having detailed development plan of the ecosystem including that of the inhabitants by involving various Central Government Ministries like Rural Development, Finance, Agriculture, Fisheries and Animal Husbandries and Environment and Forestry and including the State Government, shall be prepared.

Shri Shigeru Aoyagi also called upon the Shri Bijayshree Routray, Hon’ble Minister of Environment and Forest, Government of Odisha, who assured all possible support from the Government of Odisha in this Project. The meeting was attended by Shri Suresh Mohapatra, Principal Secretary, Department of Forest and Environment, Govt. of Odisha and Shri Samar Nanda, CEO, Chilika Development Authority.

ONGC and UNESCO, under the guidance of Mr. Dharmendra Pradhan, Hon’ble MOS(IC), P&NG, Govt. of India and Odisha State Government, looks forward to comprehensive conservation and development plan in and around the Chilika Lake area.