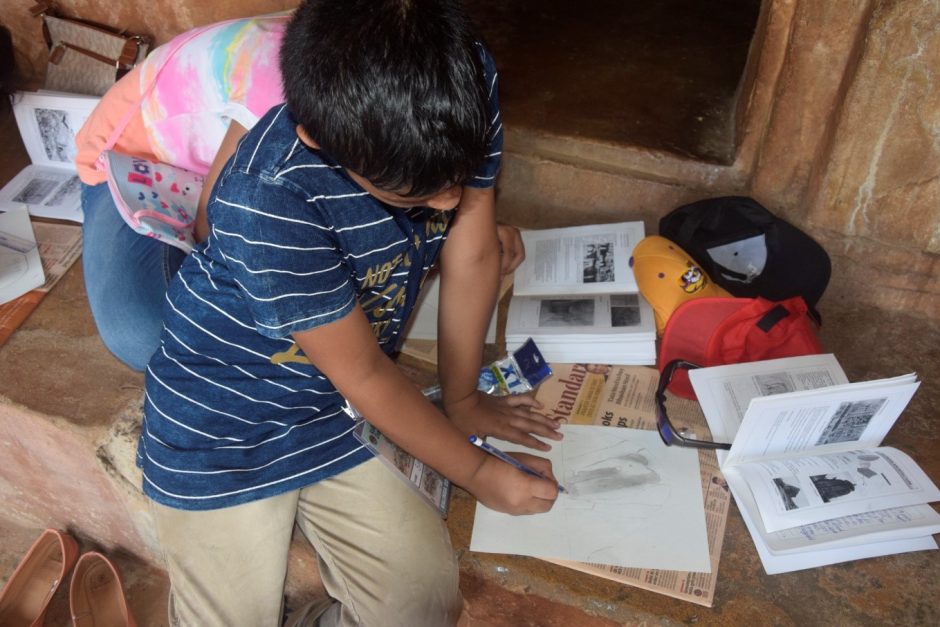 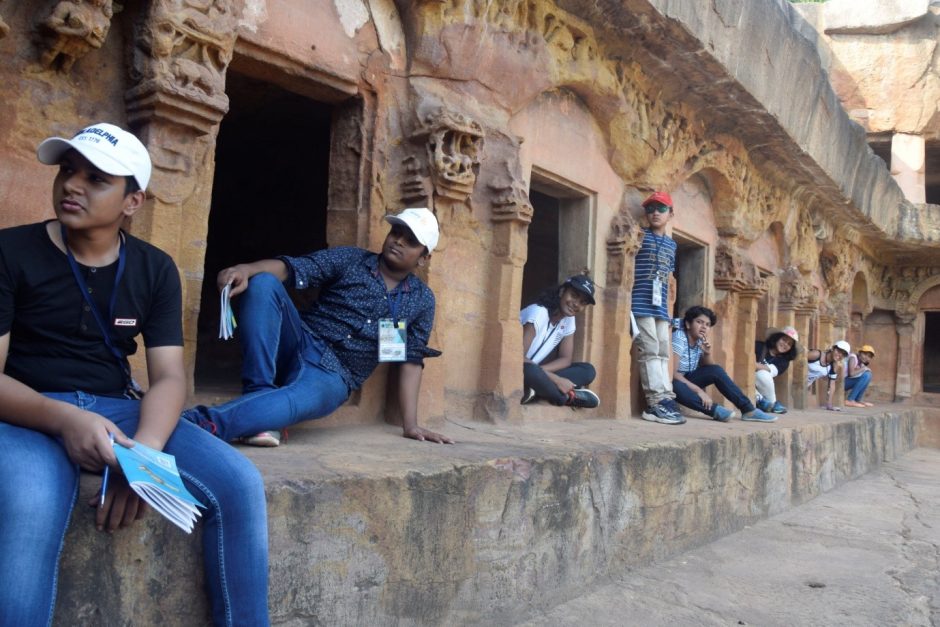 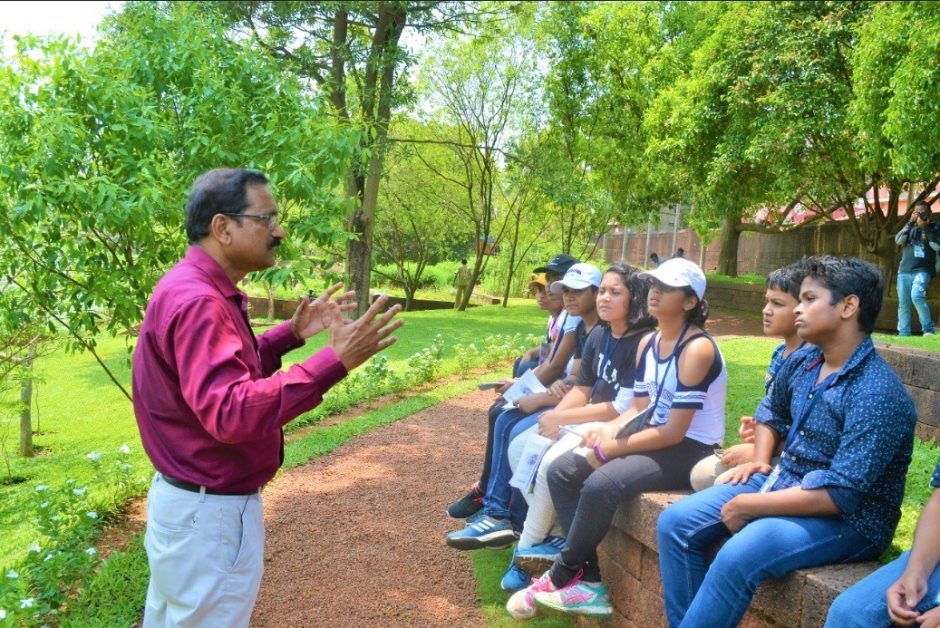 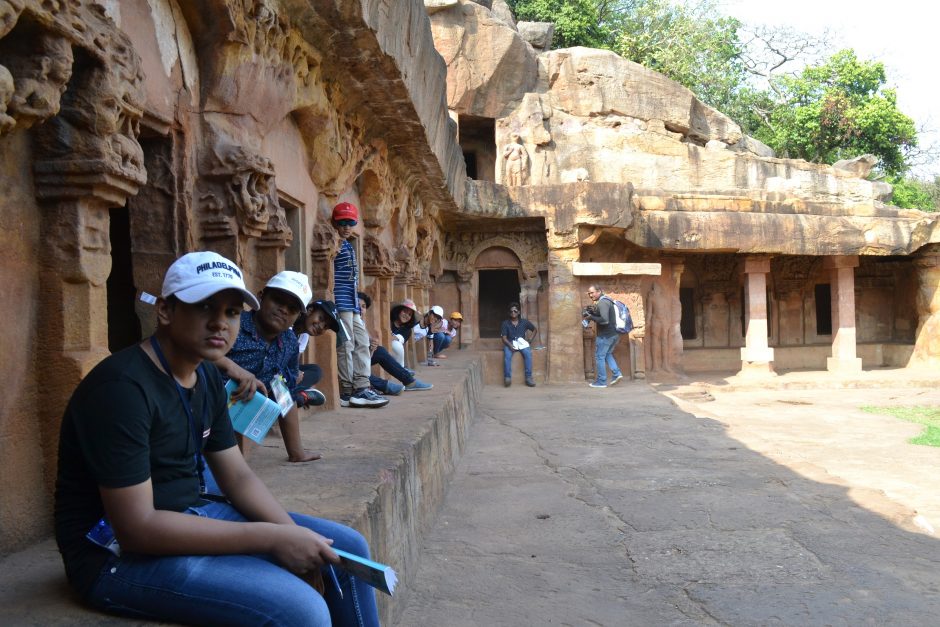 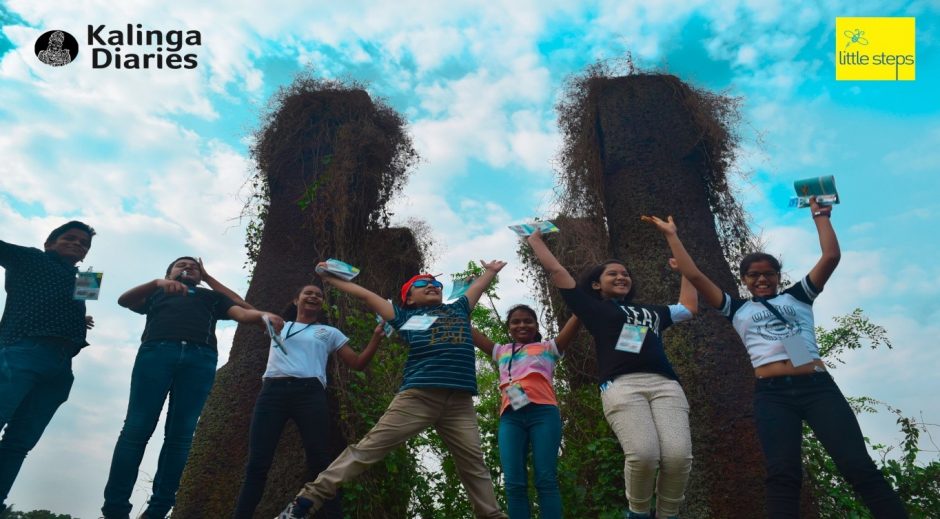 Bhubaneswar – A city where history rules with all its vigour and colour. With the aim to encourage “Think Beyond Classrooms”, Kalinga Diaries and Little Steps organised city’s first ever educational tour in the name of Kalinga Edu Tour on Sunday, 8th April 2018.  This tour was organised for students from class 6th to 10th standards keeping in mind their school curriculum. The objective of the tour was to enhance their thinking skills and to give them a practical experience of the school curriculum.  “We have designed this tour to show them the practical aspects of their studies”, said Sudha Mishra, co-founder of Little Steps. The tour started from Jayadeva Vihar at 6:45 AM. The first spot was Sishupalgarh, where students were highly enthusiastic to learn the basics of the geometric figures by looking at the monolithic pillars and the gate. They were surprised to see the ruins of the erstwhile Sishupalgarh fortified area which were not aware till date. Later on they moved to Peace Pagoda-Dhauli, where they came to know about consequences of Kalinga war and why Ashoka changed himself. They were also across with Buddhism & its philosophy of “live & let live” through the various murals at the Pagoda and the Ashokan inscriptions. During this time, they also had a story to know about the Daya river nearby where the great Kalinga war was fought.  The name ‘Daya’ came from the kindness of Emperor Ashoka as interpreted by the students.

Then the visitors went to see the Ekamravan medicinal garden near Bindu Sagar in Old Town, the heritage locality of old Bhubaneswar. Under the guidance of Mr. Ashok Mishra, they came to know about medicinal benefits of various plants and its stories attached with mythology. They had a firsthand experience to how to detect/differentiate various plants & flowers. At that same point, they had a look at Bindusagar, the biggest heritage temple tank in Bhubaneswar, its avi-fauna culture and legends associated with it along with the temple architecture which can be viewed on the other side of tank. “Kalingan Architecture played a vital role in the making of temples and heritage monuments and surprisingly you can see a lot of Mathematics in this” said Prateek from Kalinga Diaries.

The next stoppage was Vaitala deula, where students were given idea about its unique Khakhara style of temple architecture along with some inputs about its presiding deity Goddess Chamunda. They also saw the unique proto-Odia inscriptions written on the walls of temple. Then they went to Udayagiri caves where they saw the inscriptions of King Kharavela, the greatest Kalingan king of all time; the swastika symbols and various niche carvings. They were amazed to hear more about King Kharavela’s achievements and why he built these caves and later dedicated these to Jain monks. At that point they also drew some sketches to showcase their creativity under ‘Sketch Your Imagination’ and also wrote down their tour experience in the booklets provided to them as souvenirs.

The tour was full of fun as there were activities and games for the students to keep them engaged. There was a good mix of students from DAV Public School (Bhubaneswar), Loyola School (Bhubaneswar), Sri Aurobindo Institute of Integral Education (Bhubaneswar) & Montfort School (Dhenkanal).  The students were really excited to see the things which are now a part of history and its relation with modern world. Their tour was linked with their studies of geometry, biology, geography, mathematics & of course history. Students were shown several geometrical shapes and figures of temples/monuments which they immediately linked with their books. They were made aware that without basic mathematics, such architectural marvels cannot be build.

“It is really wonderful to see the monuments which are more than 2000 years old and more interesting are how people at that time built all these things” said Meghna Bhardwaj, from Loyola School, Bhubaneswar. “We learn a lot of things in this tour and this will certainly help us in our studies”, said Mahika Sarangi, from Loyola School, Bhubaneswar. “I am more surprised to know about Sishupalgarh. How they planned it and made Gandhavati river their protection point”, said Sahil Binakar, from DAV-Chandrasekharpur. “It is really good to know that how our ancestors built these things with help of mathematics at that time. This is really fruitful to our education”, said Mukund Agarwal, from Montfort School, Dhenkanal. “I am just watching the happy faces of the kids. Their faces are showing that they really enjoyed it”, one of the parents said. Finally, this first Edu Tour came to an end at around 5 PM and students made good use of their early summer Sunday holiday. And when they all reached their pickup point, parents were delighted on seeing their happy faces. “Plan is to repeat this Edu Tour in future so that kids can be well groomed into responsible citizens with awareness for heritage monuments & work for its conservation” said Taranisen Pattnaik, from Kalinga Diaries.