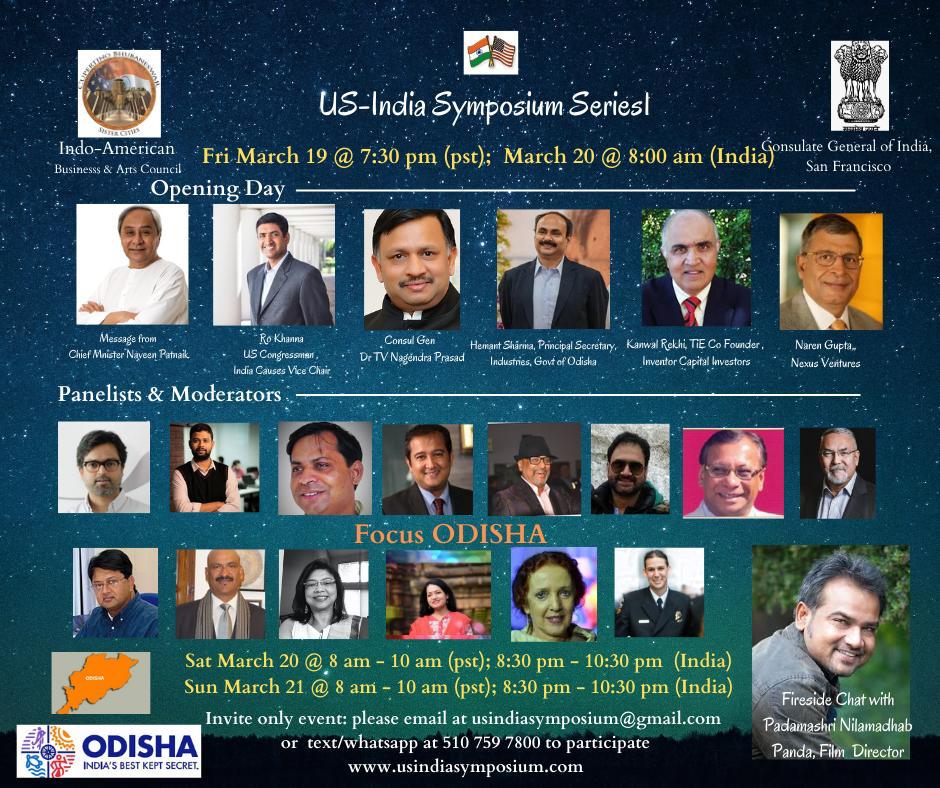 Chief Minister Patnaik congratulated the organizers for starting this initiative and said in his written message “Odisha is among the leading states in India in attracting investment. We are on a high growth path with transformative projects in various sectors.”

Congressman Khanna congratulated the organizers and shared his thoughts as the Vice Chair of India Caucus encouraged attendees  to build peace and understanding, fight pandemic, tackle global problems. He also mentioned the importance of establishing people to people connections and strengthening Silicon Valley ties to the rest of the world.

Hon Consul General Dr TV Nagendra Prasad welcomed the Chief Minister’s message and all the dignitaries and eminent guests.  He emphasized on growing India-US relations, Atmanirbhar Bharat Abhiyan, opening of sectors including insurance, reforms in labour laws, productivity linked incentive scheme to make India a manufacturing hub and Azadi ka Amrut Mahotsav.  He said this would not only make India self-reliant but integrate with the global economy. He continued to say that the bold policy reforms in every area are designed to open up new avenues of trade and investment in India in the post covid era. Youth is 60 percent of population. Several skilled enhancement programs have helped the youth immensely. The graduated and calibrated opening of the economy has helped India. Latest statistics show 30 percent rise in direct investment. India continues to remain the most attractive destinations. India’s first digital budget was presented recently that contains schemes and incentives to empower multiple sectors of the economy and to make India a manufacturing hub. He also thanked the covid warriors due to him the pandemic was tackled efficiently. He emphasized on the 3 TS – Tourism, Trade and Technology – that hold the promise and work on improving these relations.

Mr Hemanth Sharma presented the incentives for investments into Odisha in the areas of various industries. He mentioned Odisha is an industry driven state economy with 40 percent of the State’s GDP from industries, 40 percent from services and rest 20 percent from agriculture & other related activities.  He went on to say in fact no one knows that 18 percent of investments that happened in India was in Odisha. He gave an in depth presentation of Odisha today in industries, tourism and skilled development.

Mr Rekhi and Mr Gupta shared their experiences in investing in India and the current investment scenario. Both focused on the young entrepreneurs and their thinking. Several other speakers spoke and gave their remarks.

The symposium also included a Fireside Chat by Mr.Manas Patnaik, PWC Managing Director & Local Stage Artist with Odia Film Producer Director Padmashree Nila Madhab Panda  whose movies have social messages and focus mostly on climate change. One of his most popular movies is “I am Kalam” which has become one of the most watched virtual movies during pandemic. His upcoming Odia film “Kalira Atita”talks about his own trauma of witnessing the ferocious sea gobble up village after village in Odisha. Attendance for all the segments was limited, making it an ideal setting for discussion and learning. There were live discussions to exchange information and knowhow. The aim of this series is to create knowledge exchange platforms and potential collaborative opportunities for furthering and strengthening the ties in various levels.

The key reasons to participate