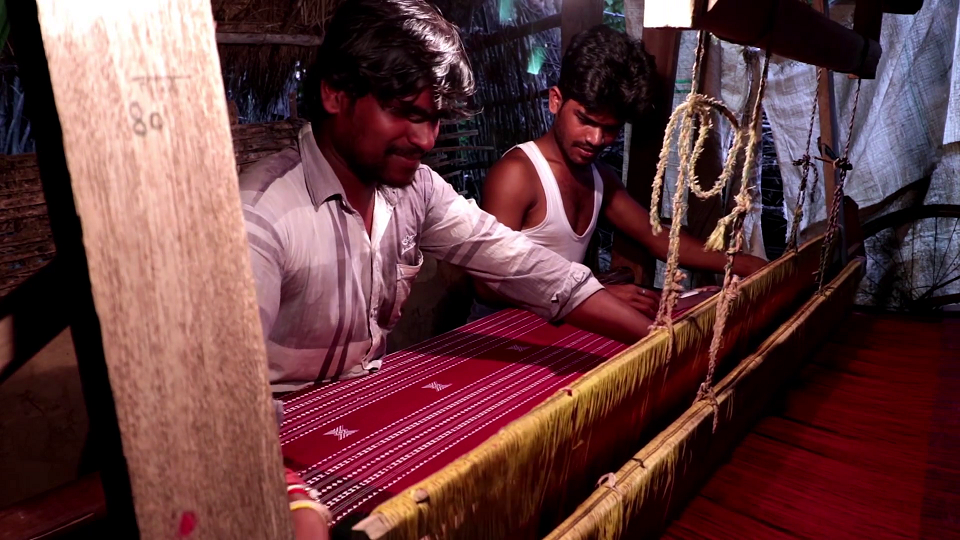 Kotpad Handloom, a unique tribal textile tradition from Odisha, known internationally for its use of natural dye and tribal motifs, unfortunately has never received the recognition and patronage it deserves. As a result, it’s in the verge of extinction.

This inspired Award-winning filmmaker Biswanath Rath to make Kotpad Weaving: The Story of a Race Against Time’; the first ever Documentary on this subject which aims to create awareness on this craft. This English Documentary, produced by PSBT (Public Service Broadcasting Trust), is a tribute to the rich textile tradition practiced by the Mirgan Community in Kotpad since time hitherto unknown. This 30-Minutes film was telecasted on DD National on 24th March 2018.
Like all his previous documentaries or other films, ‘Kotpad Weaving’ has also received ‘Official Selection’ in two International Film Festivals within just 2 months of it’s TV premiere. One is ‘Marin County International Festival of Short Film & Video-2018’ to be held at California (USA) between 30th June – 4th July 2018. This will be the WORLD FESTIVAL PREMIERE of the documentary. The other one is ‘ZAGREB TOURFILM FESTIVAL, Croatia (Europe)’ to be held between 10th-13th October 2018. This will be the EUROPEAN PREMIERE of the doc. This festival received more than 824 films from 87 countries and ‘Kotpad Weaving’ is one among the 263 films to have received ‘Official Selection’.

Talking about the video, Writer-Director Biswanath says, ‘This documentary is our humble attempt at reviving this ageless craft which is primarily a tribal textile tradition practiced for centuries by Mirgan community at Kotpad region. Just like many other Indian art forms, this handloom and its weavers has received IInternational acclaim for its relevance and significance in terms of sustainability and eco-friendly process. But unfortunately and unbelievably, very few people in Koraput district or Odisha know about such a unique handloom, let alone other states or region. I felt the need to create awareness not just about the handloom, the dyers and weavers, but also the reason behind its languishing days and probable solutions to give this handloom a second chance. Thanks to the National Award-winning Dyers, weavers, Textile Designers and professors from NIFT (National Institute of Fashion Technology), I was able to do in-depth research on this subject. I aspired to take Kotpad Handloom’s story to global audience. After almost a year of production, today, we feel really enthralled to receive such a huge response for the subject and the film.’ Apart from the support from all the Kotpad weavers, dyers and designers, customer, Govt officials from Textile Depts, I thank Vishal Bawa (Cinematographer and Colourist), Vinayak Dasgupta (Editor & Sound Recordist), Rabindra Hotta (Drone Pilot), Biju Sam (Music Composer) and Sudharsan Lingam (Sound Design & Mixing) for their immense hard work and dedication for this project.“.