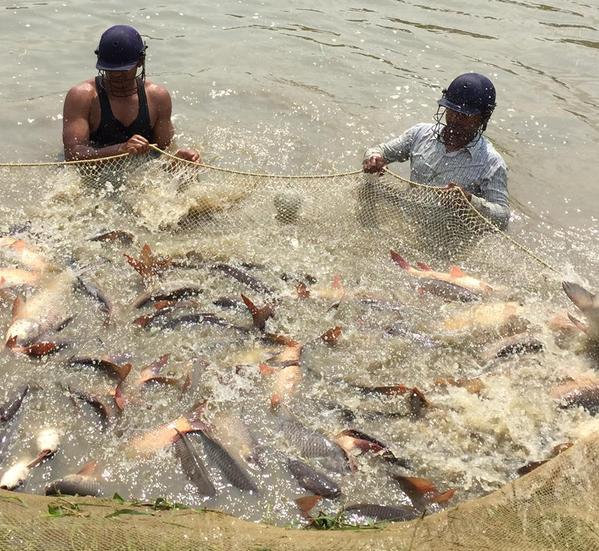 The farmers in various parts of the State are raking in lakhs of rupees through fishery which is helping the State Government to speedily achieve the target of doubling the farmers’ income.

In fisheries and aquaculture sector, the Department of Fisheries and ARD in collaboration with the WorldFish, Malaysia has introduced a fast growing and hardy variety of fish species named GIFT tilapia (genetically improved farmed tilapia) under fish crop diversification strategy and thus boosting the fish production, exports and farmer income in the State.

The tilapia is a major internationally traded seafood commodity with high demands in USA, EU, Middle East and African countries. It is produced and consumed in more than 100 countries. However, Tilapia is under introductory phase in India.

The Directorate of Fisheries, Odisha, held a GIFT Tilapia Food Festival at its campus in Cuttack on June 27 to introduce the taste of this new variety of farmed fish to its staff and key stakeholders.

Various mouthwatering dishes of tilapia were prepared in Odia style of cooking and served to the participants. More than 300 people have relished on tilapia feast and given their encouraging feedback confirming that it is a versatile fish, pairs perfectly with most spices/seasonings and cooking styles, and suit local taste buds.

During the festival, the Director of Fisheries has felicitated 10 progressive fish farmers from Mayurbhanj, Baleswar, Cuttack, Jagatsinghpur and Ganjam districts who have successfully farmed and locally marketed the GIFT.

When a progressive farmer Susanta Dalei of Kudwani village in Nilgiri of Baleswar presented a tilapia to Director Fisheries Senapati, his joy did know no bounds.

Senapati handed over certificate of appreciation to Dalei and other farmers and interacted with them to understand their experiences on GIFT farming and their views on future of GIFT production and demand in Odisha.

Senior officials of the Directorate and experts of Odisha-WorldFish project have presented the details of the crop outcomes and consumer response in local market, said Arun Padiyar of WorldFish.

It is opined that, with a cost of production of about Rs 70  per kg and affordable retail prices of about Rs 130-140 per kg, the GIFT would attract both the farmers to increase the production and mass segment consumers from middle and aspiring class in Odisha.

During 2017-18, the GIFT farming was demonstrated in 33 acres of farms spread over 10 districts of the State under State plan scheme.

More than 100 metric tons of GIFT is under production and sales in the local fish market. It is also made available at Falcon Chilika Fresh fish retail outlets in Bhubaneswar.