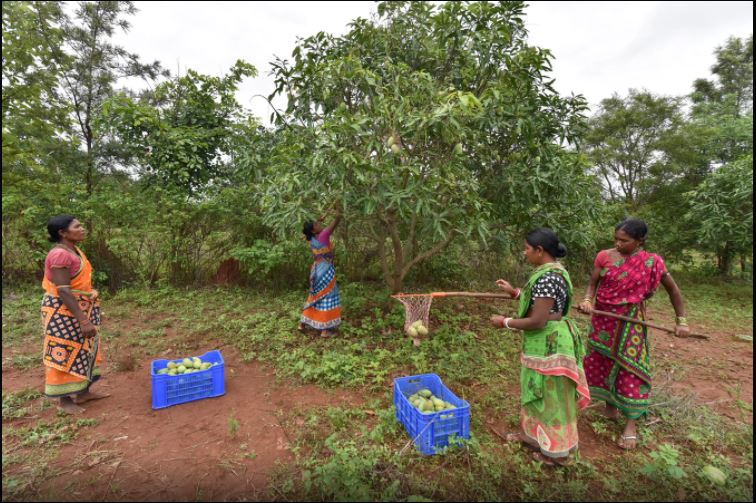 32-year-old Puse Minyaka lives in a tiny tribal village in the Koraput district of Odisha, situated on the east coast of India. A mango farmer, she has been tilling her small farm for over a decade. She is the only earning member of her family, making just enough to raise her three children.

Puse cultivates two of Odisha’s high-quality variety of mangoes, Amrapalli and Mallika. Until 2015, reaching the market meant walking kilometres with mangoes on her head. On a good day, she would earn INR 8 per kg. More often, she had no choice but to sell it for even less to a wholesale trader.

This changed in April 2016, when Puse became a member of one of 73 producer groups set up in three districts — Koraput, Raigada and Gajpati — by the Odisha Livelihoods Mission. Producer groups aim to help farmers benefit from scale, organizing them into community entrepreneurship units and providing training. For many women like Puse, who has never stepped foot in a school, this has meant training in pre- and post-harvest techniques, book-keeping, grading, and sorting and packaging of produce to increase the value of their products.

One year on, Puse’s income has more than doubled. “Earlier, the land earned barely enough to live on,” she says. “Now, I earn more than INR 40 per kg of mango. I can now feed my children better and even send them to school.”

In Koraput, almost 800 women mango cultivators like Puse are organized into 14 producer groups. They too are reaping the benefits of this intervention, led by a partnership between the Ministry of Rural Development, Government of India, the Government of Odisha, and UNDP. The Odisha-based Technical Support Agency supervises the day-to-day management of the intervention along with UNDP, and ensures retailing.