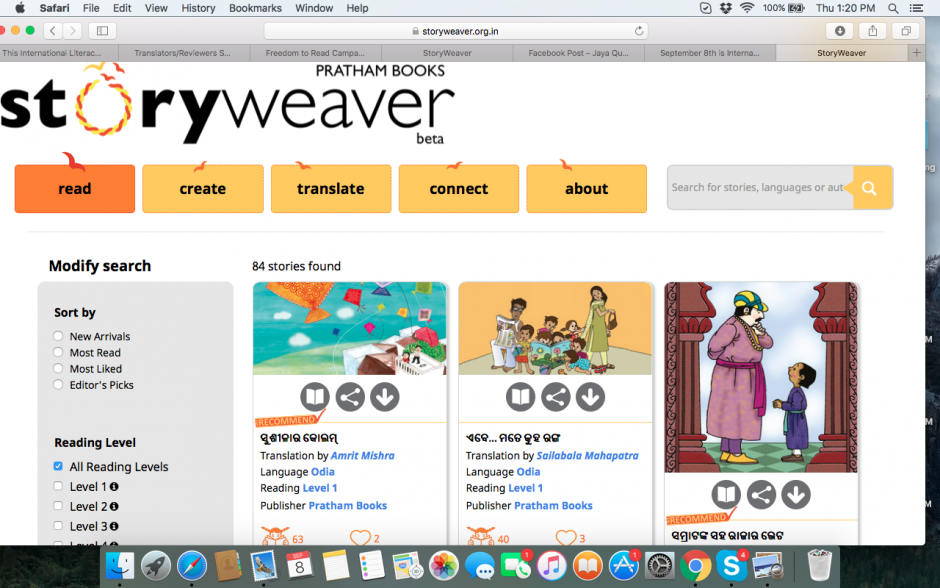 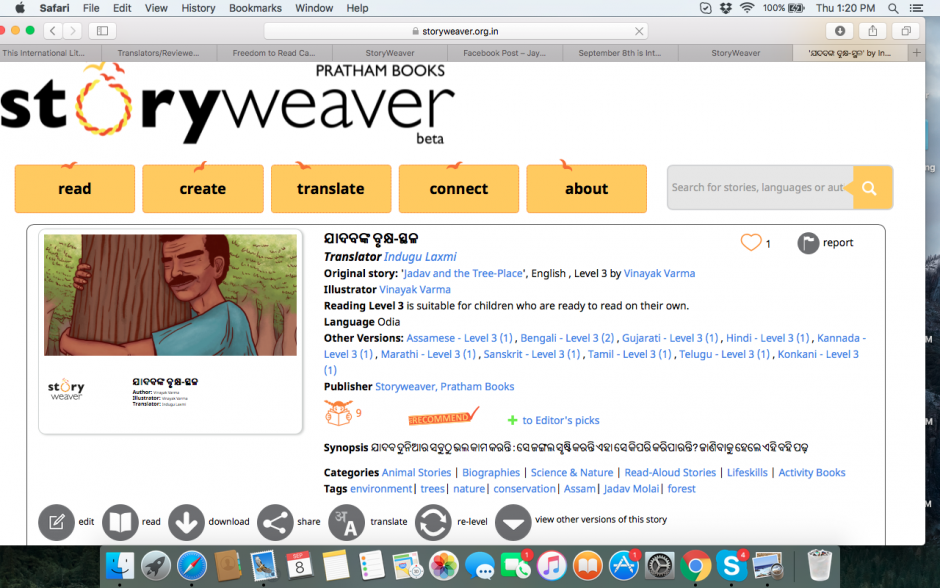 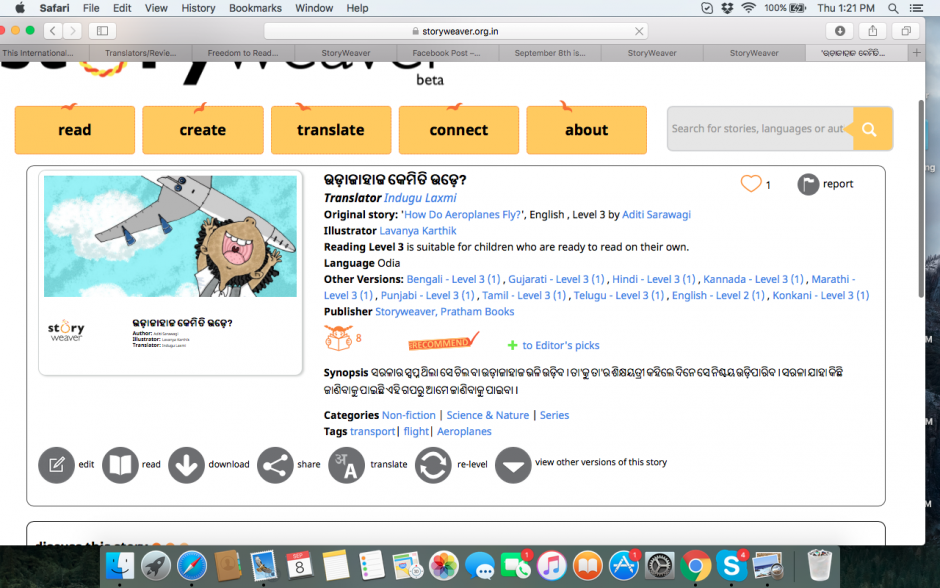 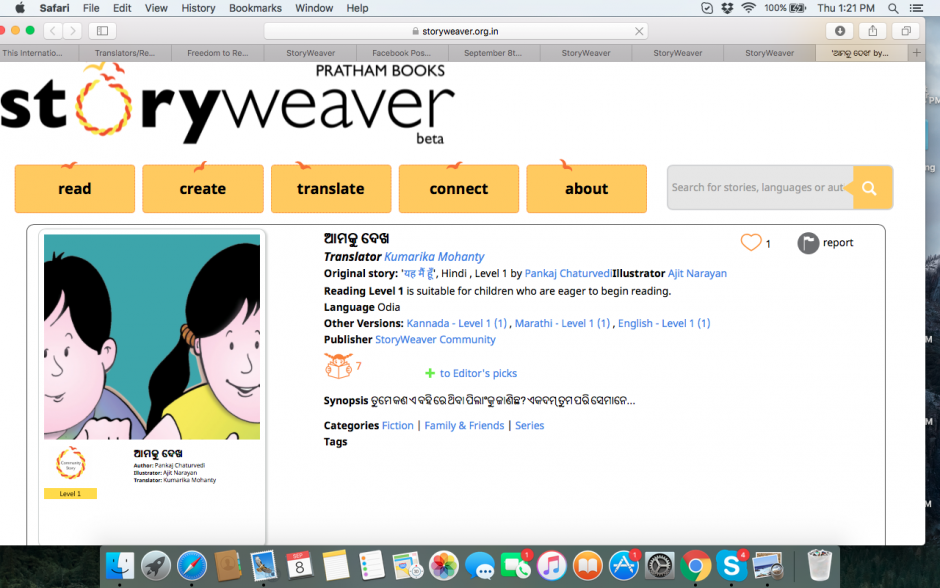 Across the world, September 8th is celebrated as International Literacy Day. This day, a year ago, Pratham Books launched StoryWeaver – India’s first open source, digital repository of multilingual children’s stories and opened up a gateway to a never ending stream of stories. To mark this occasion, StoryWeaver is launching its  ‘Freedom to Read’ campaign.

At StoryWeaver we believe that every child should have access to joyful stories in her mother tongue. With the ‘Freedom to Read’ campaign, we will add stories in 15 new languages to StoryWeaver. The campaign will culminate on International Mother Language Day (February 21st, 2017), with the stories having reached children through on-ground collaborations.

When StoryWeaver was launched a year ago, our goal was to create a participatory framework where content creators and users could collaborate with each other to create content in multiple languages. This would have a multiplier effect to address the scarcity of multilingual reading resources that exists in India. StoryWeaver launched with 800 stories in 26 languages (Indian and International). Today, there are over 2000 stories in 49 languages. Almost all the new languages have been added to the platform at the request of our community.

The languages on the platform truly reflect the linguistic diversity of India: minority languages (Konkani and Tibetan) , classical languages (Sanskrit) and tribal languages (Kora, Santali) are active on StoryWeaver. Additionally, so are international languages like Russian, Italian, Spanish, Farsi and Kurdish (Arabic and Latin Script) – to name a few.

Translations in these languages are being done by passionate language enthusiasts and teachers who believe in our mission of ‘a book in every child’s hands’.

StoryWeaver is fortunate to have an amazing community of translators who collaborate with us closely in our week. Some of them are professionals, others are volunteers who give us our time out of a love for their mother tongue.

Kumarika Mohanty is an IT Professional who volunteers her time to review Odia translations on StoryWeaver. She answered a Tweet put out before the launch of StoryWeaver asking people to help proof read Odia translations. “ I am still thankful for that tweet, that appeared on my timeline a year back, where StoryWeaver was looking for proofreaders in Odia. It was a whole new world out there, when I visited the office at Bangalore. This was the first time in my more than a decade long IT career, when I stepped out to work on something that interested me. And the added perk was I got to work in Odia. I wouldn’t have known about the technological developments related to Indic fonts, had I not been associated with Pratham Books. Having worked on the cumbersome Indian Font softwares, I could not help appreciating the simplicity and ease of the technology involved in StoryWeaver for publishing in Indian Languages.”

Indugu Laxmi, professional translator “The driving cause for my association with StoryWeaver is the concept of introducing children to stories of languages in their mother tongue. The exposure to different kinds of literature in one’s childhood  transforms the child into a person of responsible nature, knowledgeable, and more tolerant towards other cultures which is the need of the hour at present.”

StoryWeaver is also a useful resource for teachers inside the classroom. Research shows that the medium of storytelling facilitates retention and assimilation of new facts, aids application of concepts in the real world and sparks curiosity. StoryWeaver created 20 STEM (Science, Technology, Engineering and Maths) books in English and 10 Indian languages, including Odia using a grant from Oracle.

Three of these 20 digital first STEM titles were introduced to over 900 children at 31 Pratham learning centres across Delhi and Kota through a four-session schedule. A rapid assessment was undertaken in order to ascertain user (students and teachers) experiences and learning outcomes with the books. The teachers found the books to be an immensely valuable resource in the classroom. Most teachers commented on how topics in Maths and Science often intimidate children and how using stories are great tools to both introduce as well as re-enforce concepts. In one of the books ‘How Do Aeroplanes Fly?‘, the pilot in the cockpit is a woman. During interviews with children, many of them mentioned that they hadn’t realized that women could fly planes. The girls mentioned that this new piece of information has given them the hope to become a pilot someday!

Ms. Suzanne Singh, Chairperson, Pratham Books said “Stories form an important part of a child’s growth and development. They introduce new words and ideas into a child’s world and expand the boundaries of their minds. With the ‘Freedom to Read’ campaign, we hope to make many more stories available  in languages that are underserved and underrepresented in the mainstream ”.

Freedom to Read supporters on StoryWeaver

Jaya Bhattacharji Rose is an independent international publishing consultant based in New Delhi.

“StoryWeaver is an astonishingly vibrant, diverse, lively, colourful and culturally engaging platform for children. It is an incredibly rich community that has developed around a repository of stories, illustrations put together by an extraordinarily talented individuals — storytellers, translators, illustrators, writers. What is truly marvellous is that this innovative digital experiment in publishing launched a year ago by Pratham Books is propelled mostly by content contributed by ordinary folks and not necessarily those who are specialists (though you will discover some of the well-known names as well!). As is well-documented languages and cultures survive if lived and evolve. The StoryWeaver platform by embracing linguistic diversity offers just such an opportunity for documenting and showcasing some of the lesser known languages of India that are otherwise rapidly disappearing.”

StoryWeaver was launched a year ago with a vision to weave a new chapter in children’s publishing. A creative space where authors, translators, illustrators and educators could come together and catalyse the creation of more joyful reading material for children.

By placing all the content on StoryWeaver under CC-BY 4.0 – one of Creative Commons most liberal licenses – we wanted to foster collaboration between content creators and users of children’s content. On StoryWeaver stories can be read, created, downloaded, translated, versioned or printed using the tools embedded on the platform.

Pratham Books was set up as a not-for-profit children’s book publisher in 2004 with the mission to see ‘a book in every child’s hand’. The key objective was to publish good quality, affordable storybooks in multiple Indian languages.

In the last decade, Pratham Books has published over 300 original titles in 18 Indian languages, which total up to about 2000 books. The books cover a range of genres including early readers, fiction, non-fiction, and storybooks on science, history, mathematics and nature. We have had the distinction of working with many of the country’s renowned authors and illustrators and our books have won several awards as well.