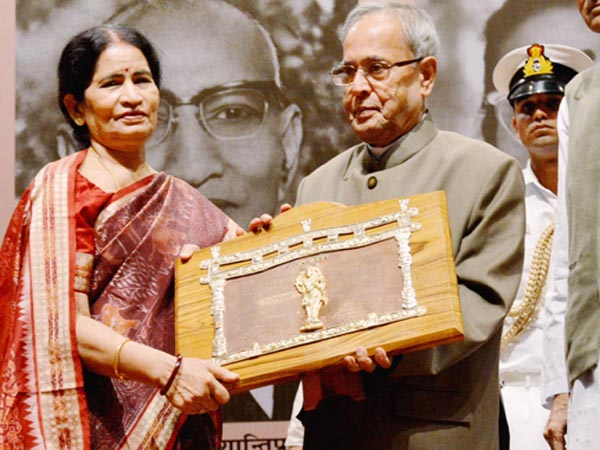 Perhaps one of the most prolific Odia women writers, Pratibha Ray has immensely enriched the modern Odia  literature by her pioneering short stories and novels. Her works not only depict the urbane milieu of Odisha culture but also delve deeply into the life of tribal communities. She has successfully woven the different aspects of tribal life in her novels like Bhagavamra desha.

A lecturer by profession for more than 21 years, she has been conferred the Odisha Sahitya Akademi Award, Moortidevi Award by Bharatiya Jnanpith, Saptarshi Award, etc. Her works have been translated into English and other Indian languages and she has represented the literary delegation to Russia, U.S.A., U.K., Australia and Bangladesh through the Indian Council of Cultural Relations (ICCR).

Her novel making work started to be published from 1974 and by mid-eighties (1985- 86) she was already established as a forefront writer. She was awarded Jnanapitha’s, Murti Devi Award for her stupendous deconstructive mythic  novel Jajyaseni in 1991. Her other effective and well appealing novels are Barsa Basanta Baisakha (The Rain Spring Summer, 1974), Parichaya (An identity – 1978), Punyatoya (The Hallowed River – 1978), Asabari (The rhythm asabari, 1980), Nilatrushna (The Blue Thirst, 1981), Sila Padma (The Stone Lotus, 1983), Uttarmarga (The Salvation Way-1988), Adibhumi (The Primal Land / The Primitive Land – 1993), Maha Moha (The great fascination / The great lust – 1997), Magnamati (The Sunken Earth / The regenerative earth, 2005) and Maharaniputra (The queen’s son, 2008).

Among the contemporary women short story writers and novelists of Odisha, Pratibha Ray would undoubtedly rank as one of the most gifted and accomplished. With an impressive crop of eighteen novels, seventeen collections of short stories, one travelogue, nine books for children and ten for neo-literates, she has received numerous awards including the Sarala Award and the Odisha Sahitya Akademi award, the latter for her novel Shilapadma in 1985. She received the Moorti Devi Award in 1991 for her widely acclaimed novel Yagnaseni. A former Professor of Education, she was a member of the Odisha Public Service Commission.

Pratibha Ray began her career as a modern writer of romance with Barsha, Basanta, Baisakha, (The Rain, the Summer and The Spring) a novel with a typical rural ambience that immediately captured the hearts of the Oriya readers. Later, even as she branched out to explore the more hidden recesses of the human psyche and character, she continued to use the same colloquial style with an eye for the odd detail that became the hall mark of all her fiction, including the best of her tales. Her early education and upbringing at Jagatsinghpur, Cuttack left upon her writing a lasting impression of rural Odisha.

Ray’s short story and fictional world is not an imaginary landscape. It is rooted in a concrete socio-historical reality and Odisha’s rich cultural heritage. Her main strength lies in her ability to employ the traditional mode of narration in order to depict the changing pattern of Odisha’s primarily rural culture Many of her stories and novels such as Adibhoomi, published in a translated form by Orient Longman, use a powerful tribal setting. Although Ray’s locales vary with the story line and the inevitable denouement, there is always a discernibly unique thematic and narrative pattern in her fictional landscape. Whether it is “Shapya” (The Curse) that received the Katha Award for 1994 or others such as “Bipralamba”, or translated stories like “The Gentleman”, “Hunger”, “The Other God”, “The Untouchable God” or “The Mango Tree”, Ray excels in the leisurely unfolding of the drama of human emotions. In most of such tales, the actual “event”,”happening” or plot plays a subordinate role. The focus of attention in the bulk of these realistic works is not on the “happening” though there is the inevitable tour de force in many stories, as in the best of Chekhov or O Henry.

Ray’s stories are unsparing in their indictment of social evils and injustice. Bigotry and obscurantism of all kinds are her particular bete-noir as in “The Other God”, a story that offers a savage critique of the so called “civilized” behaviour of man. In this story as well as the equally moving “The Untouchable God”, Ray shows us the evil of blind religiosity that negates the drive for human fellowship. While a faith in the genuine spiritual is always affirmed, such as in the story “Chandrabhaga and Chandrakala”, a great many of the tales seem to question the claims of tradition and authority. In Ray, such interrogation often leads her to question patriarchal modes of conduct and belief. She, of course, chooses to describe herself as pro-woman rather than as a feminist. This attitude has varied manifestations in stories such as “Moksha” (The Salvation) where a couple Shoshi and Nuri Das live together under one roof for forty long years, yet neither speaks nor see each other’s face. Or it may be expressed through the use of masterly irony, depicting a complex trade-off between the need for sexual identity and social respectability as in “Shapya”.