Almost every serious history enthusiast in this country comes across the subject of Eastern Ganga Dynasty at and yet strangely; the subject is, overlooked repeatedly across our national history. The general approach on this particular historical juncture ends in brief literature of concoctions and conflicting statements across loads of academic documents. It is not within my capacity to put down every achievement of this dynasty into one article. However, the magnificence in narrative of the dynasty’s struggle to power and ceaseless existence in the eastern coastal frontiers of the Indian Subcontinent for nearly a millennium according to proven archeology cannot, be ignored. Discussing some of its coherent military achievements might open a brainstorming window for some of us into the other aspects of this critical part of Odisha’s history.

Historically the Eastern Gangas existed in Odisha and parts of Northern Andhra Pradesh as a ruling family since the late third or late fourth century. During the previous Somavanshi rule, most of the Ganga families were limited to Southern Odisha (undivided Ganjam and Koraput) and Northern Coastal Andhra Pradesh. It was not until the rule of ‘Anantavarman’ Vajrahasta V in the mid eleventh century that a Ganga family broke out of their limits as subordinates and started military expansion of power in the region. There were five prominent dominions of the Kalinga Ganga family in those days ruling from five different administrative centers namely – Kalinganagara (Srikakulam), Svetaka Mandala (Ganjam), Giri Kalinga (Simhapur), Ambabadi Mandala (Gunupur, Rayagada) and Vartanni Mandala (Hinjilikatu, Ganjam).  The heartland of the Gangas had three parts of Kalinga namely, Daksina Kalinga (Pithapura), Madhya Kalinga (Yellamanchili Kalinga or Visakhapatnam) and Uttara Kalinga (districts of Srikakulam, Ganjam, Gajapati and Rayagada). 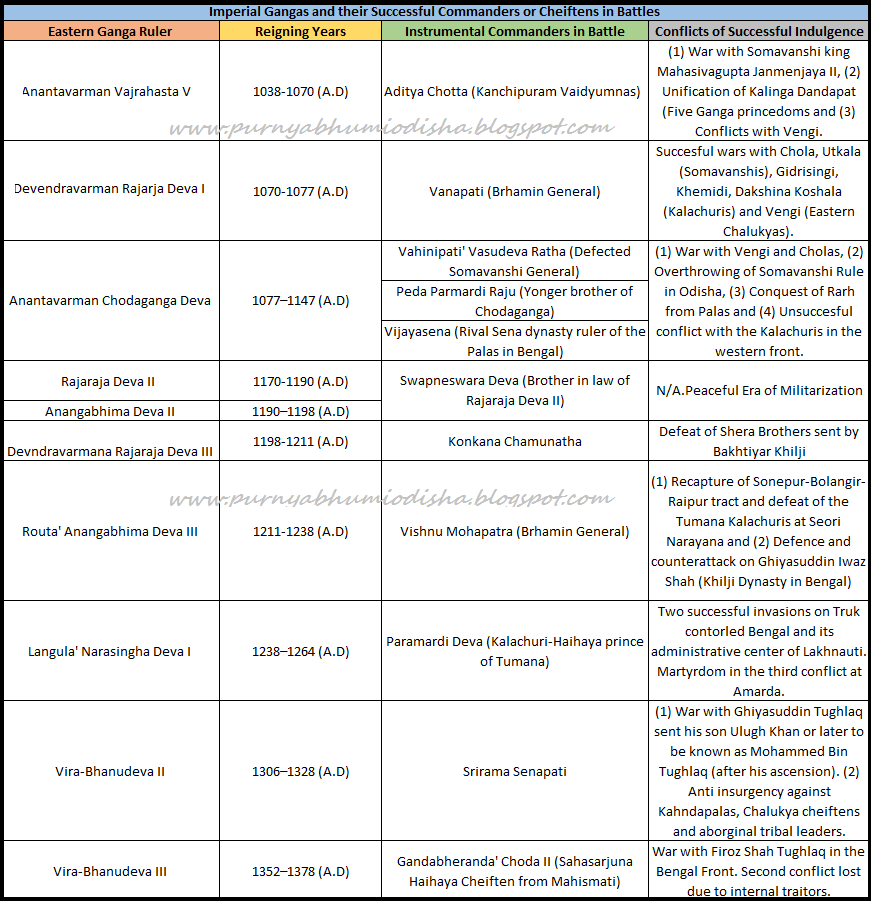 During the rule of Vajrahasta V from 1038-1070 A.D the Gangas started playing a prominent role from the southern horizon of the already weakening later Somavanshi kingdom. He introduced the Anka year of calculation system for the regnal years of the kings and this continued as a standard norm for future kings of ancient Odisha. One of his predecessors had tried to unite the Ganga dominions in the Kalinga Dandapat area unsuccessfully. Vajrahasta V had not only united the Ganga domain but also had defeated the Somavanshis in his northern frontiers. He established firm diplomatic and military relations with the Kalachuris (enemies of the Somavanshi) by marrying a princess from their family. He was also married to a princess of Ceylonese royal descent. The Vaidumvas clan of Kanchipuram were his maternal side of the family.

A Vaidumvas family member named as Aditya Chotta served in his military who later helped him in uniting Kalinga. The Korni copper plate grant of Chodaganga Deva mentions that Vajrahasta V made land grants to 300 Brahmins, which implies him conducting a Rajasyuya Yajna on his own right after the unification of the Kalinga tract. For the first time Vajrahasta V accepts titles as Trikalingadhipati(lord of the three Kalingas) and Sakalakalingadhipati (lord of complete Kalinga) in the Ganga family after his one and half a dozen known ancestors had ruled with the same farfetched ambition. Thus began the imperial era of the Eastern Gangas.

Rajaraja Deva I proved his efficiency in expanding his father Vajrahasta V’s ambition over the united Ganga dominions.  He ascended the throne in 1070 A.D, the same as the year of ascension of the Chola Kulottunga I (later crowned as Chola emperor). One of his Ganga Prasasti inscriptions clearly says that he fought the Chola king over the territories of Vengi in the south, which means he invaded the opponent to be certain. After the defeat of the Cholas, Kulottunga I gave his daughter (sister?) Rajasundari in marriage to Rajaraja I. 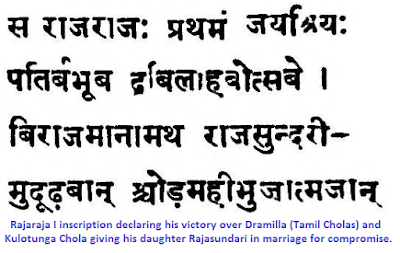 Despite ruling for only eight years, Rajaraja I was able to defeat the Somavanshi ruler ‘Mahasivagupta’ Janmenjaya II at the time when that dynasty was at its pinnacle of achievements taking into consideration the completion of architectural marvels like the Lingaraja Temple a few years before. The Southern portion of the Somavanshi territory becomes a Ganga domain. The Dirghasi temple inscription of Rajaraja I mentions his Brahmin commander in chief called Vanapati had assisted him in defeating all the enemies on multiple fronts like the Chola, Utkala (Somavanshis), Gidrisingi, Khemidi, Dakshina Koshala (Kalachuris) and Vengi (Eastern Chalukyas).

Chodaganga Deva is the most debated character among historians as he has left behind numerous numbers of inscriptions in his ancient empire. As said and seemingly, he lost, his father Rajaraja Deva I at the age of five while his younger brother Parmardi was only three years. He was heir to the expanding Ganga dominion, which was directly in conflict with the Cholas and Somavanshis.  The territory of Vengi becomes a part of fierce contest since for the Gangas though ruled by the Cholas directly after defeating the Eastern Chalukiyas. Kulotunga I had sent three out if his four sons as the governors of Vengi after the defeat from Rajaraja I and marital agreement over his daughter (?) Rajasundari (Chodaganga’s mother) with him. During the second governor Virachoda from 1078-1084 A.D and during the teenage of Chodaganga, two Chola officers were in appointment of Kalinganagara as Puravari and Lenka as per inscriptions of Lingaraja and Mukhalingam temples indicating both the ruling families had good relations. However, during the rule of the third governor Vikramchoda Chola’s hostilities began again.

Read the full blog by clicking on link below :

About Author –
Born and brought up in Bhubaneswar, Mr. Manjit Keshari Nayak is currently working in the Information and Technology industry at Bangalore. He is a volunteer research analyst and aspiring writer on the History of Odisha for last 5 years.