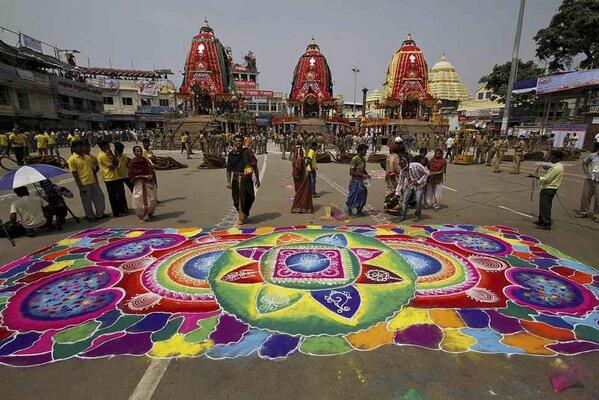 the festival is about Puri’s resident deity, Jagannath. Nabakalebar, which literally means a new body, involves the replacement of the idols of Jagannath, Balabhadra, Subhadra and Sudarshan at the famous Jagannath temple with new ones. It happens when there are two months of Ashadha in the Hindu calendar, like this year. This happens once in every 12-19 years – the last Nabakalebar was held in 1996. The new set of deities is made from a special variety of neem (margosa) wood, which is locally known as Daru Brahma. In the ceremony, not only are the idols replaced but “supreme power” too is transferred from the old to the new through secret rituals.

The exercise begins after a mid-day offering to Jagannath. A 12-foot garland called Dhanva Mala is especially prepared for the Lord and his siblings. Post worship, the garland is handed over to the Pati Mahapatra family which leads the procession to Kakatpur, 50 km away where the Maa Mangala temple is located. (En route, the procession halts at the palace of the former king of Puri.) The eldest Daitapati (servitor) sleeps inside the temple, and in his dream, the Goddess is supposed to inform him about the exact location of the neem trees.

These are no ordinary neem trees. Since Jagannath is dark, the tree from which his idol is to be carved also has to be dark. However, as Jagannath’s siblings are fair, the wood for their idols should be light in colour. The Jagannath tree should have four principal branches, symbolising the four arms of Narayana. There must be a water body near the tree as well as a cremation ground and an anthill. At the root of the tree there has to be a snake pit. No bird must have made nests in the tree; and no branch should be broken or cut. The tree has to be located near a three-way fork on the road or should be surrounded by three mountains. No creepers must have grown on the tree and there have to be Varuna, Sahada and Bilva trees (these trees are not very common) close by. Finally, there has to be a Shiva temple in the vicinity.

Once the trees are identified, at an auspicious moment, accompanied by sacred chants, they are felled. The logs are then brought to the Jagannath temple in chariots by the Daitapatis for carving. The transformation ceremony takes place three days before the celebrated Rath Yatra, when the ‘Brahman’ or the life force (also referred to as pinda) is transferred from the old deities to the new. The transformation is guided by a set of rules: the designated Daitapatis are blindfolded, a piece of cloth binds their hands before the transfer begins and they are not allowed to shave after the first day of the search procession.

At midnight, the old idols of the deities are carried by the Daitapatis on their shoulders and buried before dawn, a ritual that nobody can witness, or else he is destined to die. For this reason, the state government carries out a full power blackout on this night in the entire town of Puri. The following morning, the new deities are seated on the altar titled ‘Ratna Singhashana’. The date for this event is July 16. Two days later, it will culminate in the great chariot ride of the deities. Thereafter, it will be business as usual for the temple after a gap of 58 days.

For some rationalists, all this might look obscurantist. But for people in Puri, their faith in Jagannath is supreme – so supreme that the state is leaving no stone unturned to ensure that the whole festival happens without a glitch. The gathering of this scale needs elaborate bandobast: passenger amenities, uninterrupted electricity and proper sanitation. The budget for these public works is close to Rs 2,000 crore.

5 million devotees will descend on Puri, one of the four places of worship that a Hindu must visit in his lifetime. The occasion is the Nabakalebar festival when Jagannath, revered by millions as the lord of the world, takes a new form, exemplifying the principle of reincarnation, the cycle of birth and death. The festival promises to transform Puri, a town in coastal Odisha of less than half-a-million people, according to the 2011 census. Its infrastructure is getting a serious facelift, and its economy – hotels, restaurants, shops, rickshaw pullers and even priests – hope to do brisk business in the rush.