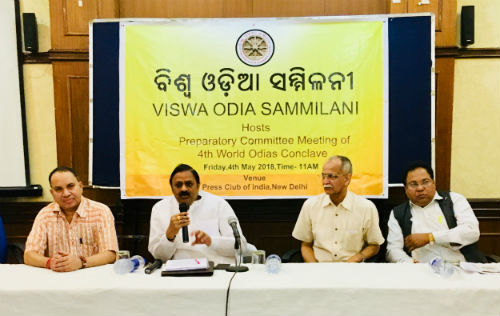 The Viswa Odia Sammilani will be held at New Delhi on the 23-24th December this year. Speaking to the press during the launch of the official website and Android App, President of the Sammilani, Dr. Murali Manohar Sharma said that the two day conclave will be an event with participation from the entire Odia diaspora spread all over the world.  The contribution of Odias in the fields of medicine, engineering, IT sector, research etc. is phenomenal. Dr. Sitakanta Das, the Mentor of the Sammelani said that this will be a platform for Odias  who love their culture and are proud of the roots.

Kishore Dwivedi, the Convener of this  conclave said that participation from America, Canada, Australia, United Kingdom and other places has been confirmed. The two  day conclave will have a slew of programmes which will highlight the rich diverse culture and heritage of our glorious state. There will be scintillating performances of Odishan dance, music and martial art forms.

Others who attended the launch ceremony included   Dr. Bimalendu Mohanty, the former Vice Chancellor and Dr. Kamal Mishra, the present Vice Chancellor of the Utkal University of Culture.  Dr. Gopinath Mohanty and other Jagannath Cult scholars too attended the launch. Anil Dhir said that the Odia diaspora should be expanded and the Odias of Mauritius, Sri Lanka, Malaysia, Indonesia, Fiji, West Indies etc. too should be included. He said that there was a mass exodus of Odias to foreign shores after the Great Odisha Famine of 1866. They usually went as indentured laborers to work in sugar plantations and forest clearance, and have been forgotten.