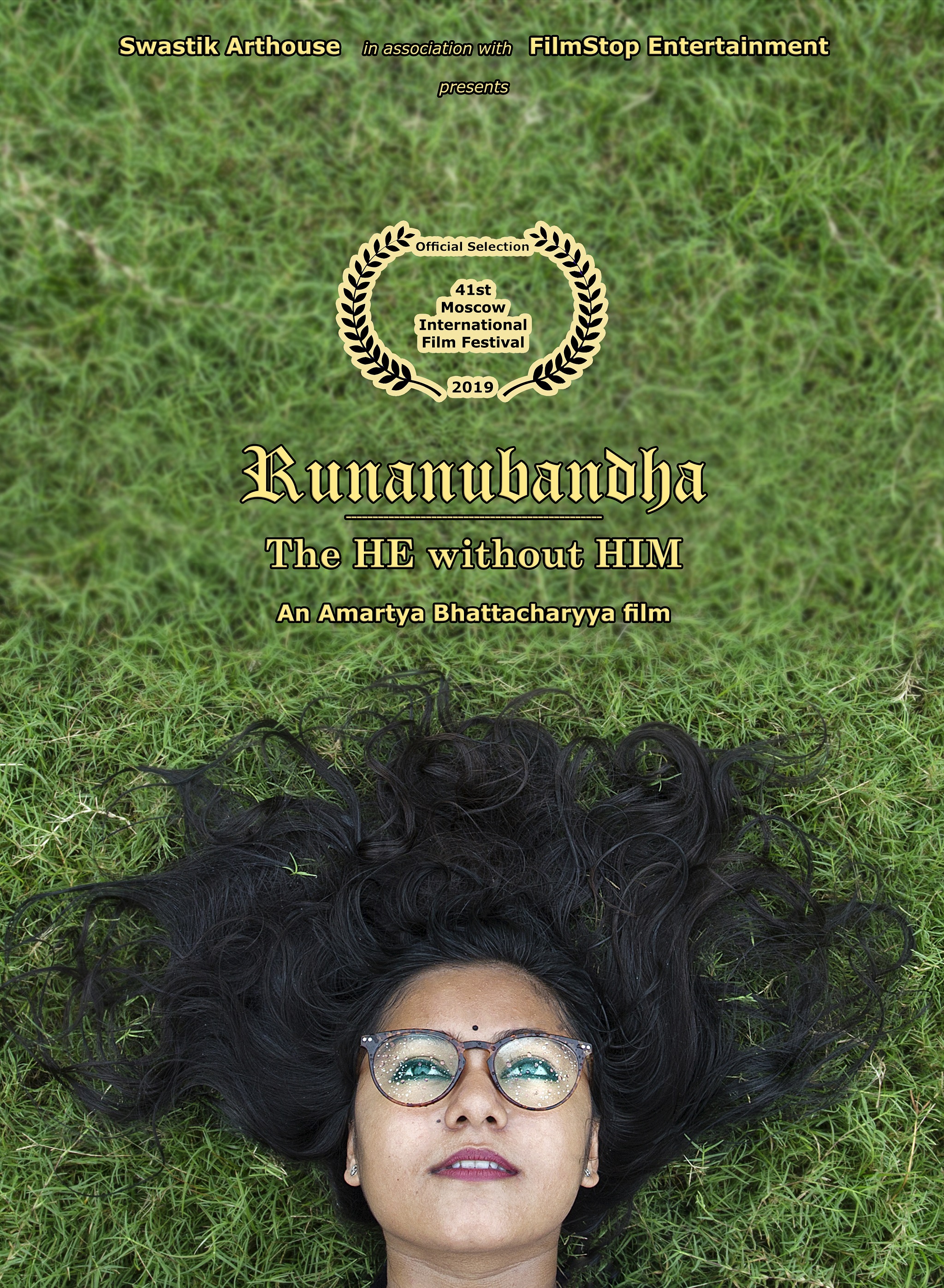 Runanubandha – The He Without Him, the latest feature film from Odisha based production house Swastik Arthouse has been officially selected at the prestigious 41st Moscow International Film Festival 2019 (MIFF)  which starts from April 18. The film features as a part of the ‘Films around the world‘ section. It is the only Indian fiction feature film at the festival. The only other Indian presence at the festival is the documentary ‘Reason’ by Anand Patwardhan.

MIFF is one of the oldest film festivals of the world having started in 1935. Here’s the country-wise list of films selected in 2019, at the official website : http://moscowfilmfestival.ru/miff41/eng/films/country/

The film has been directed by acclaimed filmmaker and National Awardee Amartya Bhattacharyya and produced by Swastik Choudhury. It has already impressed several critics and renowned filmmakers.

The film features first time actor Priyanka Ghosh Roy as the protagonist character around which the film revolves. Swastik Choudhury also plays a very interesting character. Renowned Indian filmmaker Susant Misra plays a short cameo as an actor. The music of the film is scored by Kisaloy Roy, whereas the much iconic Rock star and the National award winning singer Rupam Islam (of Bangla Rock band Fossils) sings the title song. The film is shot in Kolkata and it captures some essential characteristics of the city in an unique way. Amartya has written, directed, shot and edited the film himself. The sound is designed by Sujoy Das of Filmstop Entertainment.

This film is the third feature film from the house of Swastik Arthouse which has earlier made two Odia films – Capital I and Khyanikaa (The Lost Idea), both critically acclaimed at various international film festivals round the world. Recently, the tally of number of film festivals that featured Khyanikaa reached twenty five – the most by an Odia film ever.

About the film:
Runanubandha is a term used in spirituality which refers to the body’s memory, which comprises of genetic memory and memory of intimate physical connect. It is this memory which is said to bind a parent and a child, a husband and a wife or any other intimate relationships.
The film explores a daughter’s search for her father in the metropolis of Kolkata. The daughter Shatarupa, finds the voice of her father in a young man who comes to her life as a director. The paternal traits draw her towards him, but she finds herself trapped elsewhere between emotional complexities and simplicity.
The film also draws a parallel with the mythological tale of Lord Brahma, the universal father and creator, who was attracted to his own daughter Shatarupa (also known as Saraswati). The film unfolds the mystic journey of a daughter in pursuit of her father.

About the Production House:

Swastik Arthouuse was founded by Swastik Choudhury a 32-year-old Actor and Producer from Odisha. He has made several independent productions with the sole aim of creating films that will have its presence felt globally. He has been keen to bring forth cinema as a language of expression portraying the dark alleys of the human psyche in the audio visual canvas.

The first film under this banner was the experimental and acclaimed film ‘Capital I’ (2014). It was the first Independent feature film of Odisha and the first Odia film to be selected in the 20 years of history of International Film Festival of Kerala. In 2016, it was broadcasted in an European channel –Filmbox Arthouse for 26 times.‘Khyanikaa-The Lost Idea’ is their second production. It was selected in the prestigious Indian Panorama section of the 48th International Film Festival of India, Goa and has made it to twenty five international film festivals across the globe.‘Runanubandha’ is their latest production.

About the Director:
Amartya Bhattacharyya is a 31 year old national award winning filmmaker from eastern India, whose films have been screened at over 120 international film festivals across the world. Amartya Bhattacharyya is not only an independent film director, but also a poet, writer, cinematographer, editor, painter, actor, lyricist, recitation artist and a photographer. He won the national award for Best Cinematography for his fantasy documentary ‘Benaras – the unexplored attachments’ at the 63rd National Film Awards. He also won the Best Editing for his feature film ‘Khyanikaa – The Lost Idea’ at the 29th Odisha State Film awards. He has won around 15 international awards as a director, writer, editor, cinematographer and for Best film. All of Amartya’s films, poems and other works are dark, mostly surreal, and psychoanalytic in nature. Amartya’s films have been screened over 120 international film festivals around the world