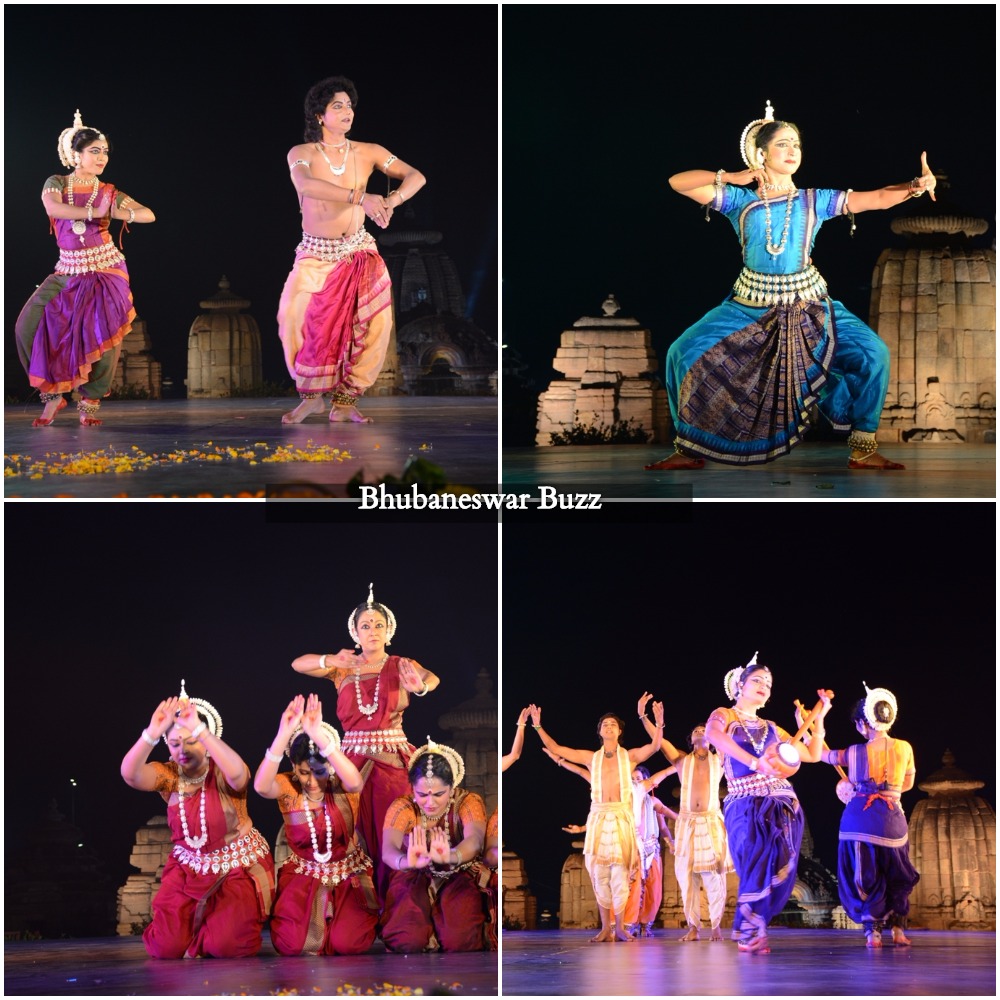 The temple tower (shikhar) of 10th Century architectural Mukteswar shrine in the centre of Bhubaneswar stood as a majestic mute spectator in the background. A sprinkling of smaller temple shikhars on the same premises provided the quaint backdrop to the open air platform flanked on its right by the towering Siddheswar (Ganesh) temple. The subtle lighting enhanced the ethereal look of the place showcasing the best of Odisha’s artistic nature. It seemed a blessing to dance in such a beatific ambience; for that matter, viewing it was an even greater privilege.

True to Odia tradition, the Mukteswar festival follows a set pattern: it opened its venue to a lamp-lighting ceremony lit from the sanctum lamp brought by a dancer. This was followed by a ‘brinda gayan’ (group singing) led by a well-known maestros in the field of Odisha music circuit, each a day in invocation to the presiding deity. Guru Krushna Chandra Ray with his disciples rendered the “Shiva Vandana” in raga Pahadi followed on day two by Sangita Panda and her group and on the final day it was Sukanta Kumar Kundu and ensemble. These renditions lent an air of auspicious beginning. The dance presentations were designed in solos followed by duet and finally group choreographies. The entry and exit to the elevated stage were also beautifully designed.

Pankaj Pradhan emerged the best among solo dancers for more than one reason. The hackneyed mythological characters were replaced by something novel – the life story of Bheema’s (of Mahabharata) little known son (may be an Odia folklore) called Bilalsena, the unsung hero, son of a Naga princess. His traditional pushpanjali (“Sri Ramachandra kripalu…”) established his credentials as an artiste of calibre even before he launched into his thematic production. A brief on the theme both in English and Odia kept the audience well-informed to appreciate the performance on stage. Pankaj was not only agile and accurate with his nritta, he proved to be an artiste with a natural flair to emote. The dancer depicted Bilalsena’s valour through vigorous nritta to bol-taan while he gestures wielding weapons like the sword, bow and arrow, the mace, etc. This was an impressive piece of artistry as was a more mesmerised abhinaya encircling the stage with murali hasta mudra on realising the omnipotence of Lord Krishna.

Sujata Mohapatra was her inimitable self as she narrated excerpts from Ramayana in the Guru Kelucharan Mohapatra baani. The strong points were her gaits and postures as the valiant Ram, the sturdy Lakshman who draws the Lakshman rekha, the docile Sita, the delusive deer giving a slip every now and then and so on. By now the artiste has established her synonym with this episodic presentation. What we expect of her is variation in interpretation of the roles without marring the character. For instance, Sita’s blaming and directing Lakshman to go in search of his brother Ram came in a bit too fast on hearing the cry of “Hey Ram”.

Saswati Gorai Ghosh’s attempt to ring in a unique theme for her solo performance deserves an accolade! But the exotic theme could not find an impressive translation in her dance. Firstly, her brand of Odissi seemed linear, replete with acrobatics and long strides, circling and jumps. The inherent grace of this genre was sorely missing despite tribhangis and rare chowkas. It was the story of how “moorchana” (classical musical scale) originated and was brought forth into the world. Set to Bengali/Sankrit song and verse, under the guidance of guru Sharmila Biswas, “moorchana” aimed to present the birth of the sapta swara (seven notes) which later got reflected in the taal of the mridanga and finally found its way into the Gandharva ganam or celestial music, the source of Indian classical music. Instead of following this pattern with clarity, the artiste went into several mythological stories to trace and retrace the origin of the moorchana before it got established in heaven and earth. From dance point of view these looked like disjointed pieces of information hurriedly told in a fast-track dance where the swing and swerve if any were also racy. Of the duo dance or jugalbandi, Sachikant Pradhan-Swagatika Sahoo’s “Mangalacharan” and later the “Guha” episode from Ramayana was by far the best in the series. Though Swagatika lost out now and then on the taal, Sachikant more than made up for it. His thematic presentation of Guha, the boatman’s character was poignant, especially his emotive action to the lines, “Vishnu Pada, Vishwa Pada”. The “Prakriti-Purusha” theme by Pabitra Kumar Pradhan and Sridutta Bhol had the duo dancing together on verses devoted to Shiva and later to Mahishasura Mardhini and thereafter to Radha and Krishna.Pabitra emerged a good dancer than his counterpart in body kinetics.

Subhalaxmi Padhi and Arati Kar gave a fairly good recital with the Vakulabharan pallavi though the Odissi sway went missing from Padhi while Arati looked graceful. The raga-anuraga theme which juxtaposes Radha and Meera’s love for Krishna was interpreted as two love-lorn women pining for the same divine person.

Group choreography by Sharmila Mukherjee and her group of nine from Bangalore outdid the other two group dances in terms of aesthetics, artistry and dance. Right from costume to select pieces, especially the devotional one which depicts a Muslim devotee’s plea for Lord Jagannath’s grace, the group made for a harmonious whole. The thematic dance where Sharmila enacts the devotee and the group change stances depicting Lord Jaganath in myriad ways was commendable. In comparison the Delhi-based Natya Ballet Centre group dance faded into insignificance, while Subhash Swain’s Nrutyangana ensemble gave a moderate performance.
The orchestra for all the three days was a great draw with most audience audibly appreciating the accompanists. The fest was put together by the Odisha Sangeet Natak Akademi and Odisha Tourism Development Corporation.

Article was first published on The Hindu