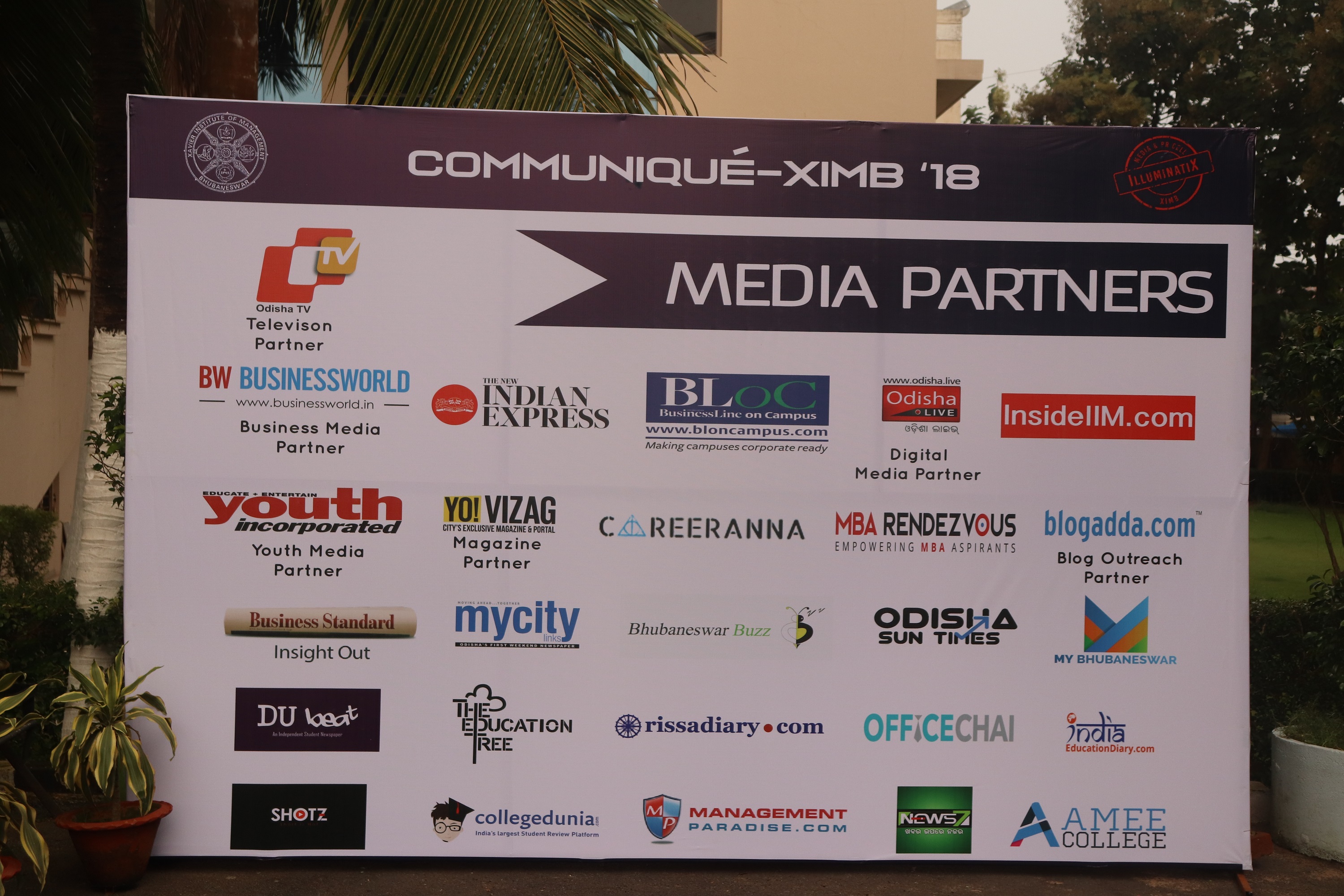 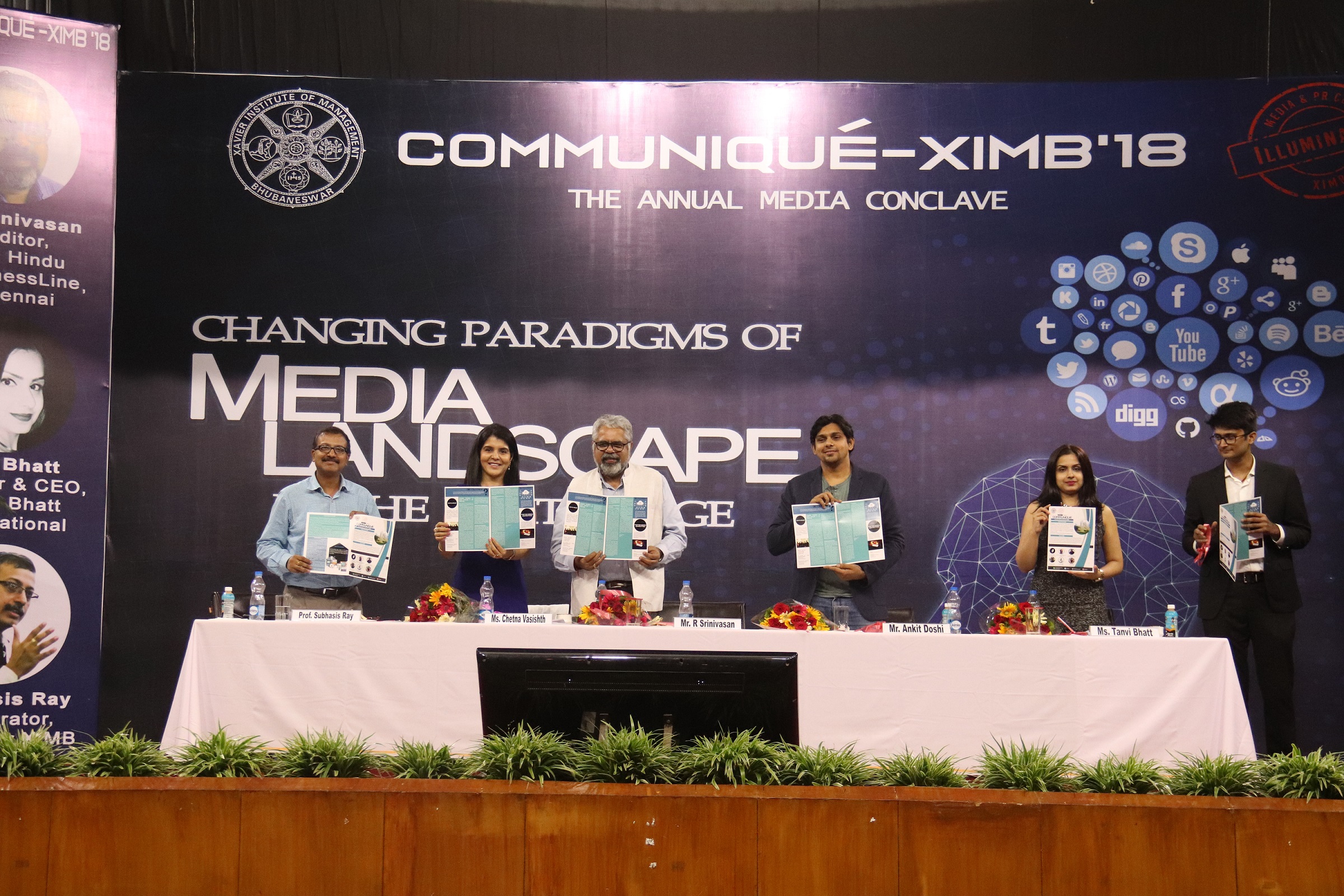 IlluminatiX, the Media and PR Cell of XIMB, held the fifth edition of Communiqué – the Annual Media Conclave, took place at Xavier Institute of Management, Bhubaneswar on 9th September 2018. This year the theme of discussion was “Changing paradigms of the media landscape in the digital age”. The conclave aimed for the students to inquire and analyze the changing trends in media with the advent of digital transformation.

At the onset, the launch video of Communiqué was presented, followed by the ceremonial lighting of the lamp. The conclave commenced with the speech of Prof Subhasis Ray where he discussed hypnotism and the upcoming niche media. His speech was focused on the media shift from macro to micro where local content has become more interesting than global.

The first speaker of “Communiqué 2018” was Ms. Chetna Vasishth, who enlightened us on the three big game changers in the future of storytelling- Technology, Data, and Democratisation of storytelling. According to her, traditional media played a significant role in embedding preconceived opinions and notions among people while, in this golden age of content creation, all you need is an idea.

Mr. R. Srinivasan, the next speaker, shared his reservations regarding investigative journalism and genuine data collection not being done effectively. He suggested that stories made should be well informed to make a difference and media houses should hone on their strengths for story discovery. He opined that technology has not changed the process, but just made information easily accessible.

Mr. Ankit Doshi was the third speaker of the day who elucidated the importance of expressing yourself. He mentions that today, everyone is a channel with access to express and people don’t need a journalist to interpret their thoughts.

Thereafter, Ms. Tanvi Bhatt talked about personal branding and how an individual can be both a medium and the content. She gave a motivational speech asking students to be the difference they wish to bring and turn their dreams into legacies. She further differentiated between a storyteller and a story shaper, while urging the audience to be the latter.

Mr. Rahul Shrivastava who could not attend the event due to last-minute official commitments sent a message to the students through a video, which encompassed social media becoming a personal evangelizer of audience-centric marketing. He also stated how digitalization has enabled more social participation than before.

The enriching and thought-provoking speeches were followed by an interactive Q&A session with the guest speakers answering thoughtful and challenging questions posed by the students. Prof. Subhasis Ray then shared his insights and learning with the audience. The winners of the competitions held as a run-up for Communiqué were felicitated with certificates and prizes. This was followed by the release of the second edition of Communiqué, the yearly newsletter by IlluminatiX. The event concluded with a vote of thanks delivered by Ms. Akanksha Mohanty, Coordinator, IlluminatiX.

XIMB, a 30 years old business school of global repute is the Flagship School of Xavier University. Offering MBA in Business Management, Global Management, and Executive programs, XIMB strives to be a premier institute globally recognized for management education, training, research, and consulting that help builds a just and humane society. The Institute today has become widely recognized for its excellence in imparting management education. It is counted among the leading management institutions in the country.