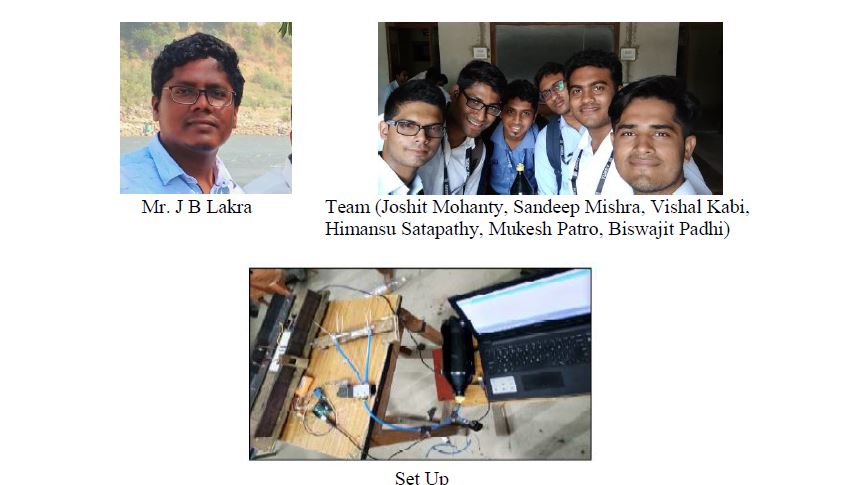 6 Students from Veer Surendra Sai University of Technology, Sambalpur (Odisha) have developed an Artificial Intelligence system to detect faults in railway tracks in real time and prevent accidents before 1 km of the fault.

Reports suggest that the accidents and deaths in 2017-18 so far is close to 100. People have died in more than 35 train derailments and mishaps. In 2015-16, most of train accidents were caused due to derailments (60 per cent), followed by accidents at level crossings (33 per cent). The derailments are mostly due to faults in fish plate joints.

Current methodologies under consideration for health monitoring of railway tracks includes involvement of large manpower and Ultrasonic Detector. Satellite Synthetic Aperture Radar Interferometry (InSAR) technology has been developed and under lab improvements for real life purpose. But none of the latest developments has potential for real time monitoring and warning a live train on the track.

The system is developed by the team under their Bachelors academic project, but has potential to save hundreds of lives travelling daily. Under this, the railway track is equipped with vibration sensor – PVDF which is integrated with NFC/Bluetooth module. Real time data transmission takes place to whichever train comes to its zone. The specially developed algorithm and software helps in analyzing the results and giving a warning signal to the train driver. It also sends an alert signal to the concerned authorities from the train in case of fault detection.

“Envisioning our Prime Minister’ aim for bullet train, it’s extremely important for us to consider safety of our citizens. We tried to develop a robust system to look down to cracks/faults as small as 1 cm in real time”, said Biswajit Padhi (Team Member).

Sandeep Kumar Misra (Team Member), working on the software part mentioned “We are looking
forward to patent our software (specially developed algorithms) which can not only analyze and detect faults but also slow down the train in case of lack of manual effort. Thus, the system (trains) can be automatized in the future”.

“We are not worried about the energy! The system is robust and capable of self-energy harvesting using the piezo sensor which has potential to transmit data/signals in case of danger and charge the circuit under normal conditions” said Joshit Mohanty (Team Member).
The team was guided by Assistant Professor Mr. J B Lakra of Mechanical Department (VSSUT).
The nation needs such technology and we wish the Government should take initiative to help these students develop the product for our future.