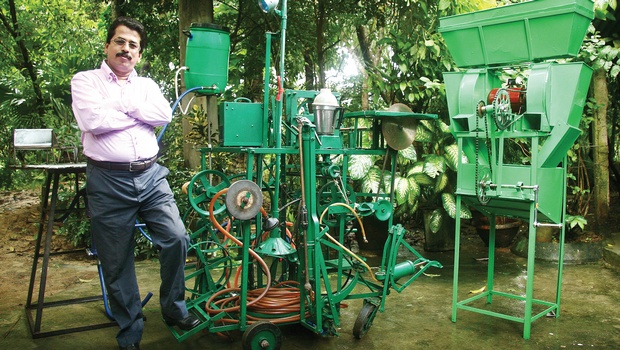 From a small cake-cutter to mechanical scissors, from a play pump to rickshaw-operated food grain spreader and from a village refrigerator to a multipurpose machine, thousands of such inventions are proof of Mihir Kumar Panda’s brilliance and his efforts to achieve important breakthroughs in science and technology.

The 47-year old native of Ichhapur near Bahanaga in Odisha’s coastal Balasore district, Panda’s genius was evident even when he was young. From a tender age, he would dismantle and assemble engines, motors and machines while his peers frolicked around. His innovations are divided into two varieties—science for the common man and science for students and are useful in day-to-day life.

Panda is also fondly called the Einstein of Odisha. He has so far made 8,537 scientific models/prototypes, including his own innovations numbering more than 2,000, which he has made without any assistance from either the government or private organisations.

His affair with science began in 1986 when he started giving tuition to some local children. Confessing that he did not know much about science models then, he recalls how he dismantled the doorbell of his house to show the children how it worked. Undeterred by scolding from his parents for his act, he built a doorbell, which stopped working a few days later. But he did not give in and built another doorbell, this time with success.

Panda, who holds a BTech in civil engineering, is an employee of the State Panchayatiraj Department. He believes life to be a long road of perseverance. “Life, an unsolved theorem, is all about getting and losing. But the happiness in finding is much better than the sorrows of losing. Finding new things is a continuous process of life which led me to do researches and shape up my dreams,” he says.

His house resembles a museum with science models of all shapes and sizes stacked in every nook and cranny. Popularising science among common people has become a way of life for him. He has set up Social Development Research Organisation for Science, Technology and Implementation (SROSTI), a unique institute for research in simple innovations and their implementation.  Hundreds of students, teachers and scientific researchers visit his institute to learn about his innovations and inventions.

“It is unfortunate that the curiosity of the students is suppressed by imprisoning them in the lifeless classrooms and keeping them away from lively environment. True education is always amusing and curiosity enhancing,” says Panda.

“Education is a lifelong process whose scope is far greater than school curriculum. The events seen by the eyes and the moulding of models done by hand are always better than the things heard and the facts incorporated in the books,” the self-made scientist observes.

Most of his models are made of waste and scrap. “I have invested my income in producing them. None helped me financially. I’ve sold my wife’s ornaments too,” says Panda, who started his venture with just 75 paise.

Funds again are a big problem. A manuscript of hundreds of simple innovations in Odia lies unpublished due to paucity of funds. Despite hurdles, though he has never given up.

Apart from his scientific laboratory, a well decorated and designed garden developed by Panda also attracts visitors from far-off places.

With no agricultural background, he has developed unique bonsai banyan trees in his nursery. He says he has nurtured them using special technique after collecting these banyan trees from abandoned temples and old buildings.

The uniqueness of the place and the scientific activities and achievements cannot be assessed without visiting his laboratory and workshop, which is a living wonder in the realm of science.

Check all of our 10 socialmedia channels here