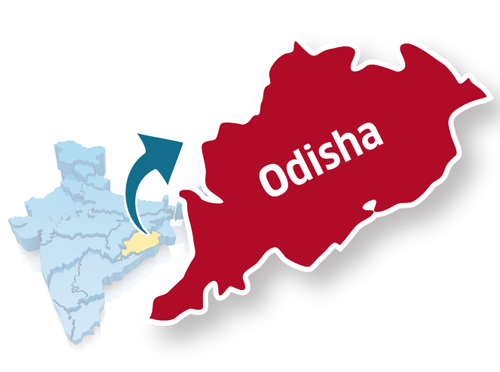 The Hindu kingdom of Odisha lost its complete political identity after the demise of the last Kings Mukunda Dev. The rules of the Afghans, the Mughals, the Naib-Nazims, the Marathas brought further instability and territorial vivisection. Further under the British rule three major political divisions came up. i.e, territories north of Chilika lake, territories south of Chilika Lake, and the western hilly tracts. Gradually these divisions passed under different situations. Finally, it took shape under the adminitrations i.e., Bengal Presidency, Madrass Presidency and the Central Provinces as per the exigencies of the time without any consideration of race, language and culture. As a result the Odia people in these administration became a negligible minority.

Following, the British occupation of Odisha the land was subjected to administrative negligence, mis-management excessive taxation, and oppressive of the currupt officials, which brought Economic devastation of the country, and caused natural calamities i.e., famines and floods. As a result the Odias lost their own identity and culture. In the later part of the 19th century, however a big step was undertaken to strengthen the Odia language and culture against Bengali, Telugu, and Hindi Chauvinism. H.H. Risley, Secretary to Government of India in 1903-05 once observed: ³ When the people speaking a distinct language were distributed over areas too small to constitute a substantial portion of a province they were neglected.´ After this statement the leaders of the Odia Movement got further encouraged and demanded a separate policitical identity of their own. Later on it could possible due to the rise of middle class intelligentia and the growth of Mass Media, like press, and the devlopment of new Science and Technology.

The local newspapers like, the Utkal Dipika of Cuttack, Prajabandhu of Rambha, and the Sambalpur Hitaisini of Bamara played an important role to create the national conciousness among the Oriyas under the towering personalities of Shyamasundar Rajguru of Paralakhemundi, Nilamani Vidyaratna of Bamara,Gaurisankar Roy of Cuttack. Soon after 1866, education made good progress in Odisha . The advancement of education introduced the Oriyas to western knowledge to seek higher posts in administration.

The Odia intelligentia became socially and politically concious. The elite class formed the cream layer of the society for the growth of political and social conciousness among the people. They took up the cause of the Odias and raised the cry, Odisha for Odias .

The language controversy surfaced to substitute Bengali for Odia as medium with a series of attacks and counter-attacks involving Odia vrs Bengali in Cuttack,Balasore, Sambalpur and Ganjam. To substitute Bengali, Hindi, Telugu in place of Odia was a mean attempt indeed.

Rajendra Lal Mitra suggested, “Even as a race, the Odias were not different from the Bengalies. In his opinion Odia language was merely an offsoot of Bengali. Kantichandra Bhattcharya, a teacher of Balasore Zilla school supported the opinion of R.L Mitra and brought out a booklet suggesesting ³Odia Ekti Swatantra Bhasa Naye´..

In the year 1876 Raja Shyamananda De, of Balasore, Babu Bichitrananda Das of Jaipur and Raja Baikunthanath De of Balasore submitted a memorandum to Lord Curzon for the amalgamation of all Odia speaking tracts of Madras, Bengal, and the Central Provinces. The Utkal Sabha demanded for fixation of the territorial limits where the Odias would be spoken under one administration. But the attempt failed due to Govt. Resolution No.237 dated 15th January. Pandit Nilamani Vidyaratna, the editor of Sambalpur Hitaisini called upon the people to protest against this unjust order of the Govt. through his poems and powerful writings.

During 1895-1905 the Odia and Navasambad advocated the merger of Ganjam, Ghumsar, Jaypore and other princely states of South, Sambalpur and the other adjacent states of Bamara, Bilaspur, Patnas, Sonpore, Raipur and other princely states in west, Chaibasa and Singhbhumi, stretching from the Suvarnarekha to Tamluk in the north with the Odisha Division. There by a long cherished desire of the people to be united with their own race could be fulfiled.

The creation of Odisha , as a separate province was taken up by a series of administrative Committiees and Govt Resoluitions. In 1919,the Montegue Chemsford reforms gave a proposal for granting of the constitutional and provincial autonomy to the Odia speaking tracts. No wonder the Montegue-Chemsford recommendation proved still-born. Besides, the Sinha Resolution on 20th Feb.1920, proposed the resolution in the council ³This council recommends to the Governor- General in Council that a mixed committee of officials and nonofficials be appointed to formulate a scheme for the amalgamation of the Odia – speaking tracts at present controlled by the Governments of Madras, Bengal and the Central Provinces with existing Odisha Division of the Province of Bihar and Odisha .´

To strengthend the Sinha Proposal the Government of India appointed a Commission consisting of C.H Phillip and A.C. Duff in 1924.

The Commission visited the places like Vizagpattam, Paralakhemundi, Mandasa, Icchapuram, Chikiti, Sorada, Khalikote, Barahampur, Rambha in order to ascertain the desire and opinion of the people and submitted to the Govt. that, ³There is a genuine and long standing deep-seated desire on the part of the educated Odia classes of the Odia speaking tracts to amalgamate with Odisha under one administration´.

On behalf of the Odia speaking people, Krishna Chandra Gajapati, the Maharaj of Paralakhemundi, went to London to attend the Round Table Conference and presented a Memorandum in farour of creating the separate state of Odisha . The Govt.of India announced in their Resolution No. F.12. VI-31 of 18th September 1931, the formation of a Boundary Commission under Samuel O¶ Donnell ³to examine and report on administrative, financial and other consequences of setting up a separate administration and demarcate the boundaries of the proposed Odisha province. The Commission visited places and record 410 witnesses at Jamsedpur, Chaibasa, Sambalpur, Raipur, Midnapur, Gopalpur, Waltair, Kakinada, and Cuttack.

In determing the boundaries they examined several factors like, language, race, geographical position and the economic interests. The Odisha province was to include Odisha Division, Angul, Padmapur, Khariar, Vizagpattam agency tracts. This proposal was recommended by the Joint Select Committee under the leadership of Lord Linithgow. As per this Committee Berhmpur town, Jeypore estate Report, about 30% of Paralakhemendi state including Paralakhimendi town, Jalantara were included in the proposed Odisha province.

Thus after a long period of struggle the Odia people got re-united after centuries of political separation. On 1st April 1936, the new province of Odisha came into existence on linguestic basic during the British rule in india with Sir Jhon Austin Hubbak as the first Governor. A long cherished dream of Odia people and their leaders like Madhubabu came true.