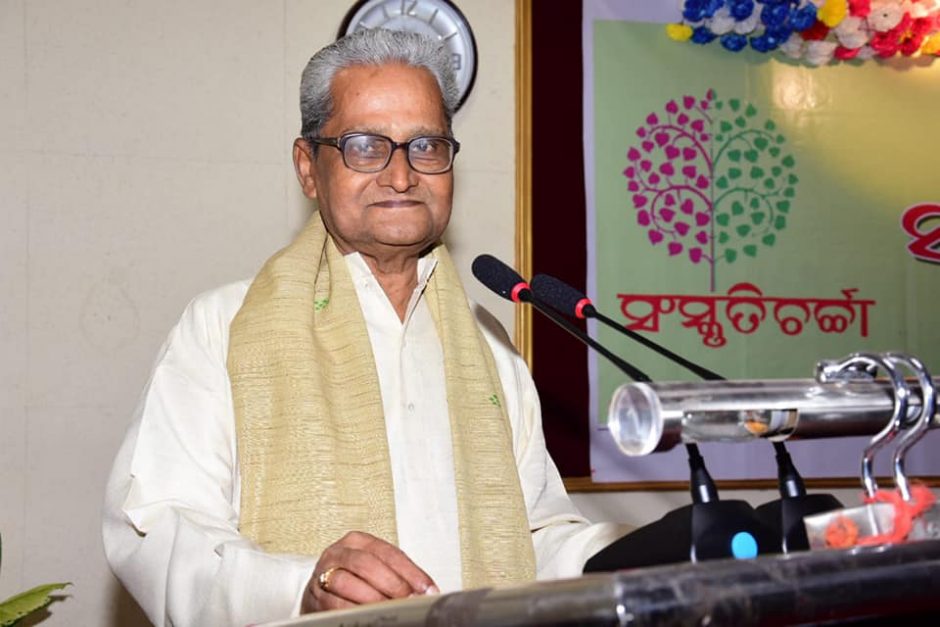 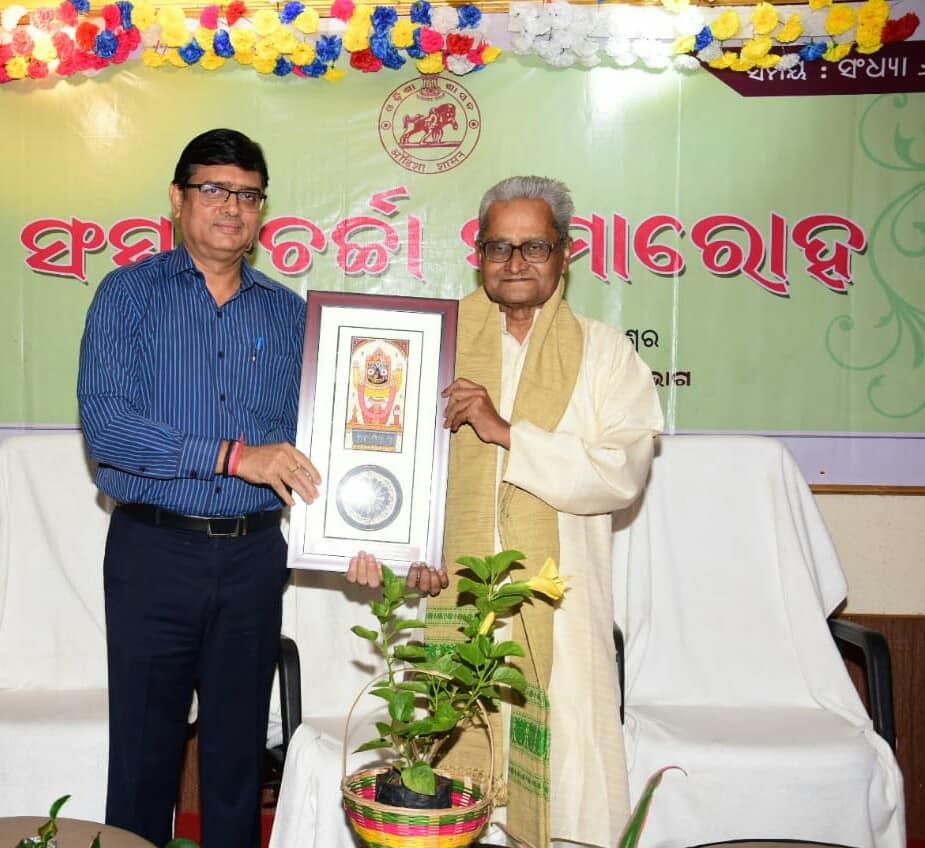 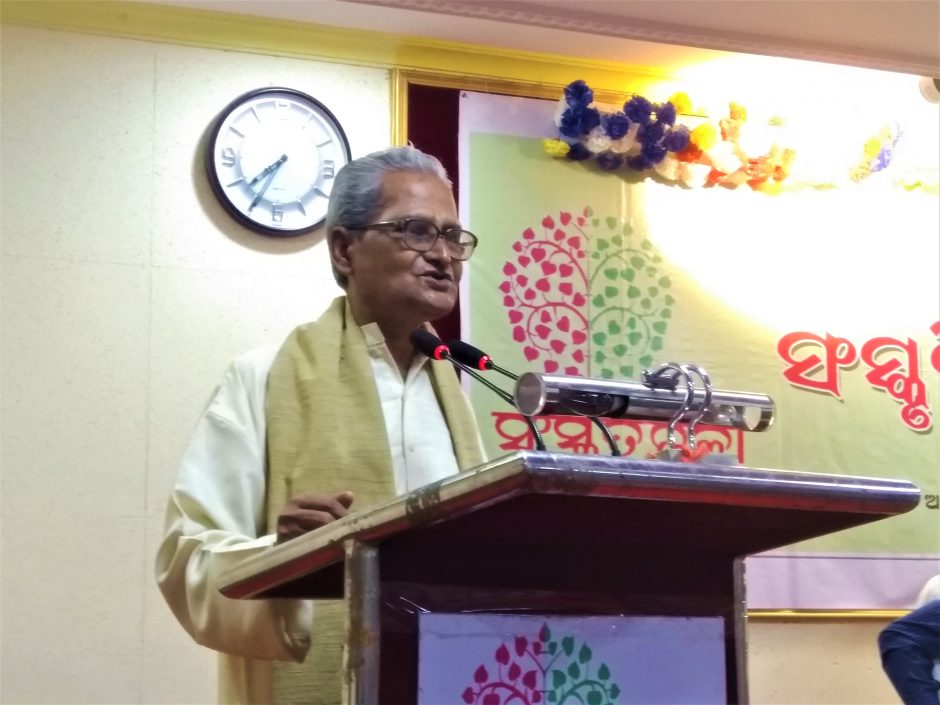 A special talk was arranged as a part of Sanskruti Charchha Samaroh in the Odisha State Archive auditorium where Shri Shankarsana Mangaraj invited as special guest to share his life experiences as a senior radio artist and orator from All India Radio. He is well known for the “Sakalara Anuchinta” which is  broadcasted from Cuttack AIR centre. His lecture covered three major aspects such as firstly his life experience in the Cuttack and Jaypore AIR centre, secondly curiosity linked with radio when it came to the public sphere and thirdly radio in the 21st century.

It was that time when Shri Mangaraj used to visit frequently to use his elder’s community radio centre. It was his self-interest to share devotional message to the public. After coming to village everyone asks him about his work when they all gathered at  Bhagabata tungi. People were often curious to know from his how he made such miracle. how a single man could be present at two place and how a small machine could speak like you?  Shri Mangaraj replied this is a machine can catch the voice over sky and this is called Akashvani. In village people had knowledge about Sunyabani, daibi bani and swarga bani in which supernatural power send their messages but there is a still confusion with the villagers how the radio works.

During his college days at Revenshaw university Shri Mangaraj used to visit Cuttack Akashvani as a casual artist and also involved in activities like krushi sanshar, narrating devotional stories, drama and also question- answer programme. During 1993 there was a big religious conflict emerged in the Karshmir valley where a large number of Hindu Brahmins were forced to convert to Islamism. To control over this situation Radio Kashmir had proposed other radio station to come up with a series which could be able to spread religious tolerance, unity, and cultural as well as devotional value.  To consider this matter Shri Sankarsana Mangaraj came up with “Sakalara Anuchinta” an  innovative idea which was devoted to provide message from Upanishad.  It was highly appreciated by the people after its first series.

23years passed away and the part was remained unchanged, highlighting this he said that this is the philosophical thought “Bahujan Sukhaya and Bahujana Hitaya” adopted by the Akashvani. It focuses not to criticize but to spread positive thoughts for all the age categories. He said, “Darkness prevails when sun reached at the horizon but few people discuss how to overcome the darkness instead of taking about the problems. A little candle can spread light on its surrounding. Similarly if a thought that delivered on the Anuchinta can create a positive impact in someone’s life then he could spread that happiness and positive vibration to other”.

During his tenure he received calls across the India. A situation happened like this that an old lawyer was near to death and his elder son informed him to come to fulfil his father’s last wish. It may documentation of tribal culture, drama, question  answer season, Krushivikas, special talk on Lord Jagannath or devotional talk, he always become the centre of attrition of many radio listeners. At that time, radio was used was as medium that worked between government and people. Many important messages were delivered through radio. In 1980s It was also noticed that radio was provided as a part of dowry. Eventually radio has become a popular tool for farmers, lawyers, students and culture lovers like many of us.

During an interview Mr. Nituranjan Dash (Socio-Cultural Anthropologist) said. “Now in the 21st century, the advancement of digital technology has changed that culture and young generation prefer audio visual tools and digital gazettes and using of radio is rare.  But yes. There are so many private radio agencies, community radio centres and government organisation promoting radio programmes and creating career opportunities. After the PM Narendra Modi’s Maan Ki Baat series the demand of radio has surprisingly increased”.

Sri Manoranjan Panigrahi (Principal Secretary, Odia langage, literature and culture department, Govt of Odisha) said, ”When there was no visual media developed, radio was the only mode of information transformation. It provides truth and reliable information ranges from a rural area to capital city. It is important to say that language delivered during the broadcast was pure and holds cultural essence. Now days, mixture of other language can be found in modern FM and other audio-visual medias which creates confusion. In past people were waiting for a long time to listen voice from the radio artists like Shankarsana Mangaraj, Jatin das, Bijaya Mangaraj , Rabi Satpathy, Nimain Charan, Jharana Das and Binaa devi , Sri Panigrahi said the emotional attachment attached with the radio. During 1999 Odisha cyclone he was staying in the Berhampur and remembered how radio provided information in the need of hour. He also recalled Nadia Bihari Mohanty, Gopal Chhotray and different special natak during Dussehera by Basudev Rath were praiseworthy. Education, information, entertainment were three key discipline which radio provided information to the people. With the passage of time still radio keeps the traditional value unchanged”.

Suchismita Mantry, Director, Sodisha State Archives said, “We have been inviting eminent personalities to speak in the Sanskruti Charcha Samaroha. Yet we have completed more than 50 special lectures.  Each lecture will be available in our Oral history documentation project. Yesterday’s lecture was memorable for me because I used to listen Sakalara Anuchinta in the early morning delivered by Shri Sankarsana Mangaraj. After the half an hour devotional songs, I was wondering what will be the food for thought today? Listening regular messages from the great Upanishad has changed my life”.