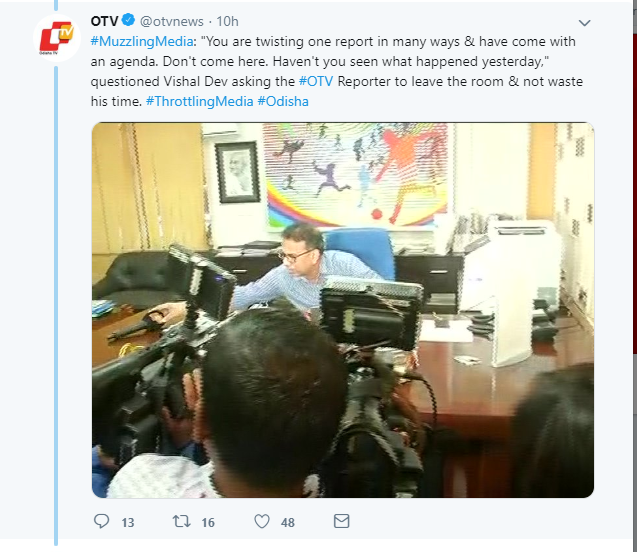 By claiming the naming rights for the 2018 hockey world cup, scheduled at Bhubaneswar’s Kalinga Stadium from November 28 to December 16, the Odisha government has made its intention clear. They want to showcase the state’s grandeur to the world, and use the event to maximise their mileage in order to attract businesses in the future.

The investments to spruce up the city and the stadium have been huge, and Naveen Patnaik’s PR mechanism has been on an overdrive. From having the tournament’s branding in buses in London to tweeting thanks to AR Rahman and Shah Rukh Khan, both of who will perform as a part of the opening ceremony, to the chief minister buying the first issued ticket of the tournament, no stone is being left unturned. Hence, it is an irony and deeply disappointing that Vishal Dev, the state secretary for the tourism, sports and youth services department, chose to behave in the most inappropriate and insensitive way with Niranjan Reddy, the senior sports reporter of Odisha Television (OTV), ahead of a press conference at his office in Bhubaneswar on Wednesday (November 21).

It is no hidden secret that ever since Baijayant Panda quit the ruling Biju Janta Dal earlier this year after he was suspended by the party, the relationship between the government and OTV, the state’s oldest and by far the most popular private news channel owned by his family, has been terse. What happened with Reddy is a result of the government’s frustration at being questioned.

The online ticket sales for the inaugural ceremony opened a day before the aforementioned press conference. As anyone who has ever tried to buy tickets for any marquee public event in India will tell you, it is not always an easy affair. Heavy demand for tickets mean that websites are not usually equipped to take the load. Remember how things went out of control for Sachin Tendulkar’s 200th and last Test match in Mumbai in 2013. Many fans in Odisha were unhappy because of the unpleasant experience they faced while trying to book tickets on www.ticketgenie.in. To their credit, Hockey India acknowledged the issue and tweeted that the overwhelming response of fans “has led to the slowing down of the website.” Manoj Padhi, the state sports and youth affairs joint secretary, told reporters that he will discuss the matter with Hockey India.

OTV reported on this matter based on experiences of a few fans, and statements from Hockey India and Padhi. It, however, seemed to not have gone down well with Dev.

Niranjan arrived late for the press conference, and there were already reporters from three other media houses in Dev’s cabin. Dev looked irritated with Reddy’s arrival, and removed the OTV boom when it was placed in front of him. He was almost dismissive in his behaviour. One can hear him saying, “You come with an agenda and are twisting one report in many ways. Don’t come here. Leave the room and don’t waste my time. I haven’t called you, this is neither a park nor a public space. Haven’t you seen what happened yesterday.”

Dev’s uneasiness comes through in his body language. He almost seems to have a sense of entitlement. He is trying to use his influence to curb the freedom of press. Any recognised media house has the basic right to be present wherever there is a gathering of press. By saying that “I haven’t called you”, is Dev indicating that the state government is happy to be selective in choosing which media houses to address? That’s blatant abuse of power. Firstly, there obviously was no “agenda” in what OTV reported in this case, and Dev has no authority to ask a reporter to not attend a press conference just because he does not agree with the organisation’s journalistic principles.

Accepting criticisms and moving ahead is one of the basic tenets of anyone operating in the public sphere. These are basic etiquettes of media management, and when the World Cup is at less than a fortnight away as a part of the organising committee you cannot be brooding over one negative report in the local press.

By targetting the state’s biggest media house over a trivial issue, Dev has played out the state government’s cards openly. Why is there such sense of insecurity when the state promises to do everything it can to project itself as the next biggest sporting destination of the country? Is the state government indirectly stating that no one has the right to question its authority? Instead of disallowing one reporter from attending a press conference, how about the state government letting their work speak to silence the critics?

The ruling party definitely cannot be bringing politics into play and making a mountain of a molehill. The vision should be to collaborate with all stakeholders in order to project the state in the best possible way over the next few weeks. Dev’s act has got the entire country questioning the state’s intention. Surely, not the kind of publicity one would love to have before a big event. It is myopic in every sense, and demeans all the good work that has gone in so far to make the world cup a massive success.