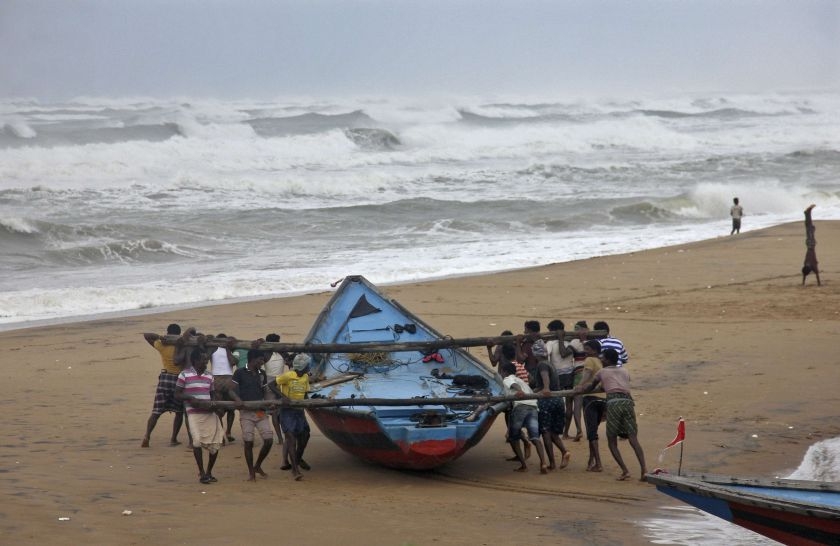 A fisherman’s son and now a fisherman himself, Kulamani Tarai knows all too well that while the sea has provided sustenance to his family for generations, it can also be a cruel and deadly place.

Every morning, when he leaves his mud-and-thatch home on India’s east coast to venture out on his wooden boat into the Bay of Bengal, he knows there is a chance he will not return.

Deaths of fishermen are common along this coastal belt of Odisha, where calm seas can suddenly turn violent and swallow flimsy boats like his, leaving families back home to grieve fathers, sons and brothers lost at sea.

But a new state-run voice messaging mobile service for fishermen, which provides weather updates, ocean status forecasts and locations of where to scout for a fish, is trying to change this. It already has more than 200,000 subscribers.

“I know how devastating it is if you are not aware of the weather. During the horrific 1999 super cyclone, hundreds of our fishermen brothers were killed,” said Tarai, 59, sitting with other fishermen in the Jagatsinghpur district.

“Our main concern was how to stay safe. Now, we do not have so much fear. Whenever we get a voice message saying the sea condition is rough, we never go out for fishing,” he added.

It may already have had an impact. Government data shows there were 45 fisherman who died in Odisha in 2014, down from 57 in 2013.

India’s fishing communities, about four million people, are among the most impoverished in the country with more than 60 per cent earning less than a dollar a day, according to the 2010 census by the Central Marine Fisheries Research Institute.

The International Labour Organisation sees fishing at sea as one of the world’s most dangerous occupations and the government of Odisha is well aware of that reputation.

“Odisha has seen calamities like cyclones and floods 77 times over the last 100 years. The fishing community, particularly those living on the coast, bear the burnt and are always the worst affected,” said Bishnupada Sethi, secretary of Odisha’s fisheries department.

“Their miseries multiply due to poor shelter, illiteracy, poverty and, above all, a lack of access to information.”

The voice messages, all in the local language Odia, give information on potential fishing zones, weather warnings, ocean status forecasts and market rates for fish such as hilsa, mackerel, prawns and shrimps.

The messages also provide information on fishing bans that are temporarily imposed and offer regular updates on the various welfare schemes offered by the government.

Sethi said there are also plans for a similar service for the poor communities working in the livestock, dairy and poultry sectors, adding such a service would help bridge the gap between the “information-rich” and the “information-poor”.

Local fisherman have welcomed the service, adding that it has not only helped keep them safe, but also increased their incomes.

“Two years ago, I use to catch only 50 kg of fish daily,” said 45-year-old Sanatan Behera, a fisherman at Chilika lake in Odisha’s Puri district.

“Now, after I know the exact fish location through the voice message, I am able to catch almost double.”