It’s a guided migration. Of bovines tended by humans. Every year, the milkmen of Odisha’s Jagatsinghpur district steer large numbers of domesticated water buffaloes across the River Devi. This happens during the hot summer months when seeking fresh grazing pastures on the other side. And then they swim back. It isn’t quite the migration of Serengetti National Park. But an extraordinary sight nevertheless.

I witnessed this exodus one day near the Naharana gram panchayat. The village is located on the banks of the Devi. The river flows through the Jagatsinghpur and Puri districts of coastal Odisha, and is a principal distributary of the Mahanadi. 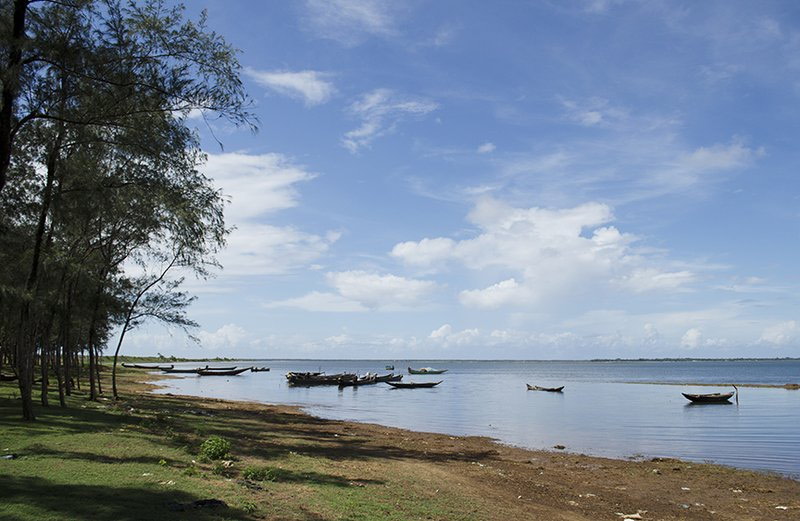 The banks of the Devi near Gandakula village in Naharana gram panchayat. The land mass to the right is the Manudhia (Manu delta)

Many fishing communities live in the villages surrounding the Naharana gram panchayat. The Devi Nadi (river) is their main source of livelihood. This coastal area is also home to a large community of milkmen. Many other households own cattle, and that gives the families an additional income.

The Odisha State Cooperative Milk Producers Federation is well-established here. The milkmen and others who own cows and buffaloes don’t have to worry about finding a market for their produce – the federation procures it from them. 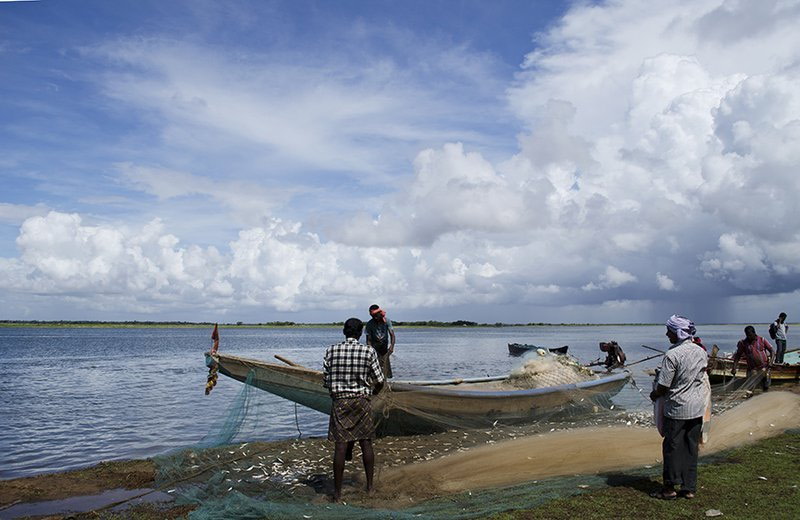 Fishermen separating fish from the nets by the Devi, which is a hub of saltwater fish

The estuary is barely 10 kilometres from Naharana, and because the mouth of the river is wide, numerous deltas have formed in the villages. Locals who have, over time, lost their farmlands to the river, use the deltas for sparse agricultural activities and temporary habitation. These deltas are also the greenest grazing pastures in the area.

In Patarapada village in the adjoining Bramundali gram panchayat, a milkman’s family sells the milk of the 150 water buffaloes they own. For such families, traditionally not landowners, it is not easy to maintain a cattle-shed and find grasslands for so many buffaloes. The banks and deltas of Devi Nadi come to their rescue. The buffalo-owners pay a hefty Rs. 2 lakh every year to the owners of the delta grasslands for allowing their buffaloes to graze.  During the night, the buffaloes rest on the river banks under the casuarina trees. During the day, they swim over to the delta to graze. This continues until the deltas form freshwater bodies in the monsoon, which the buffaloes can use to quench their thirst.

The accompanying images depict the one-way journey of the buffaloes in their daily pursuit of greener pasturelands. 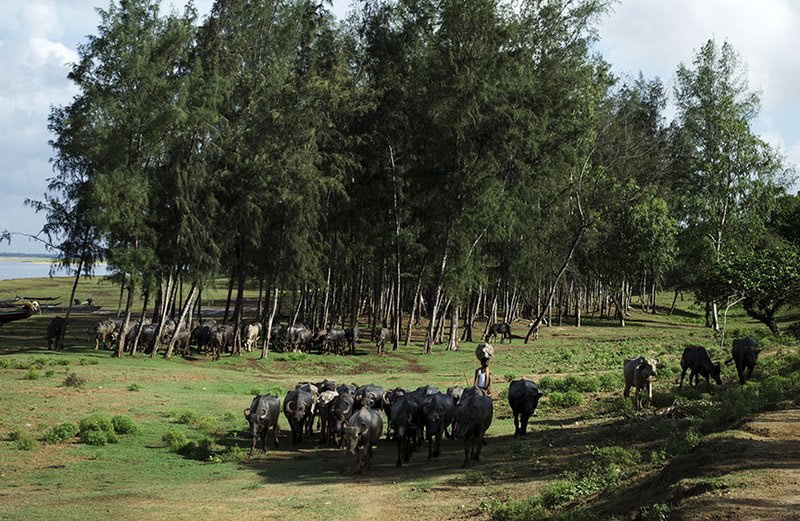 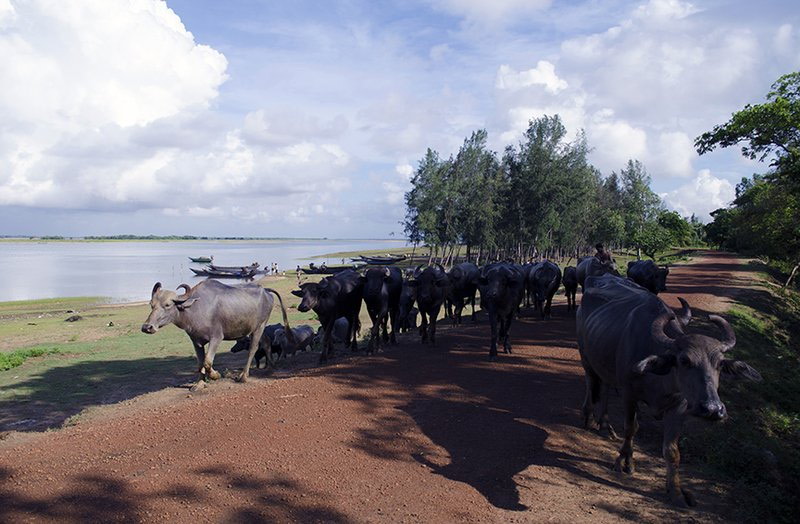 They take the embankment till the point where the river is the narrowest between the road and the delta, so that they have to swim the smallest distance 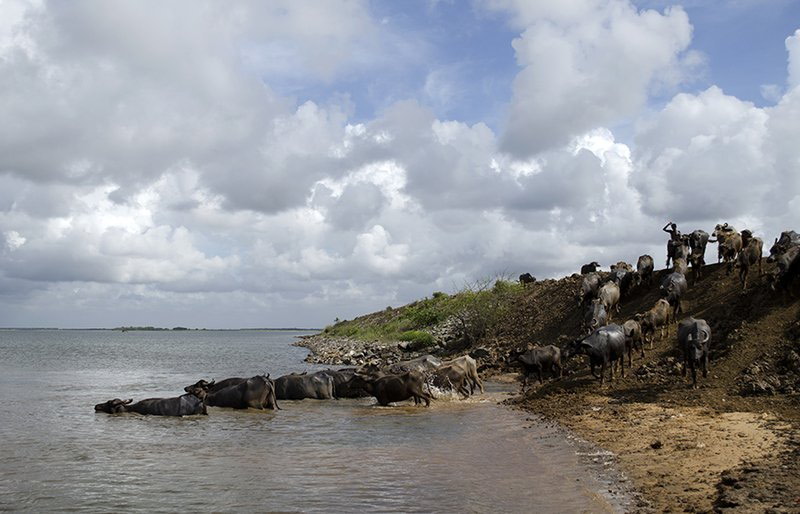 The buffaloes get off the road to cross the river. Some of them are hesitant to get into the water, others eagerly jump in 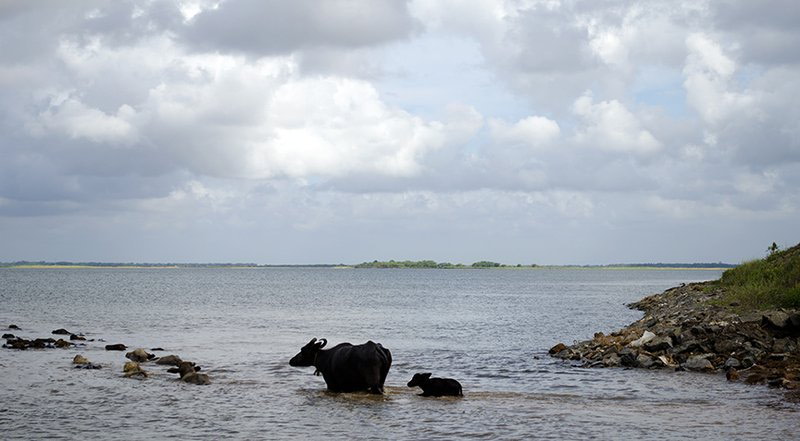 A three-day-old calf takes the plunge with her mother 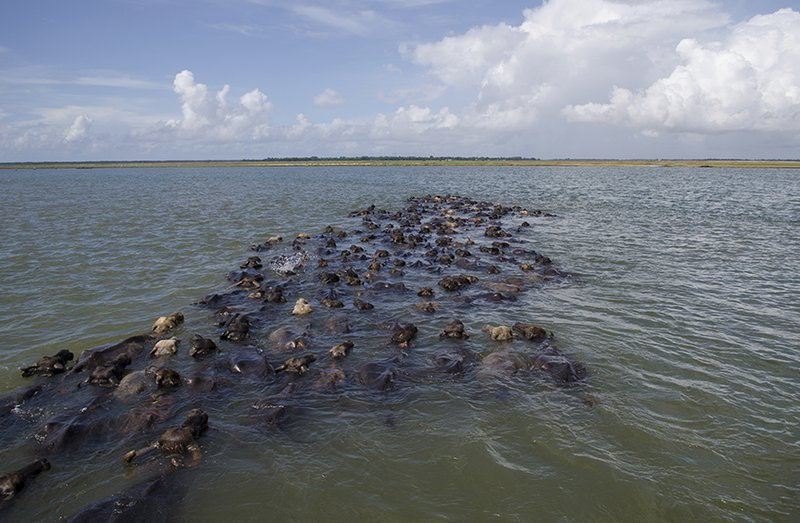 The buffaloes swim in clusters. The herdsmen follow their livestock in a motorboat 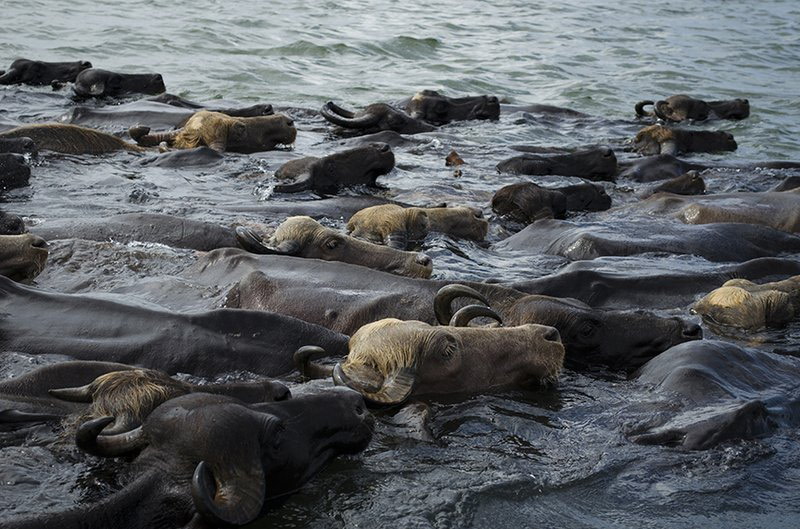 They swim in clusters for safety and to protect the weaker ones, including the calves. The lesser swimmers lean on the others to stay afloat 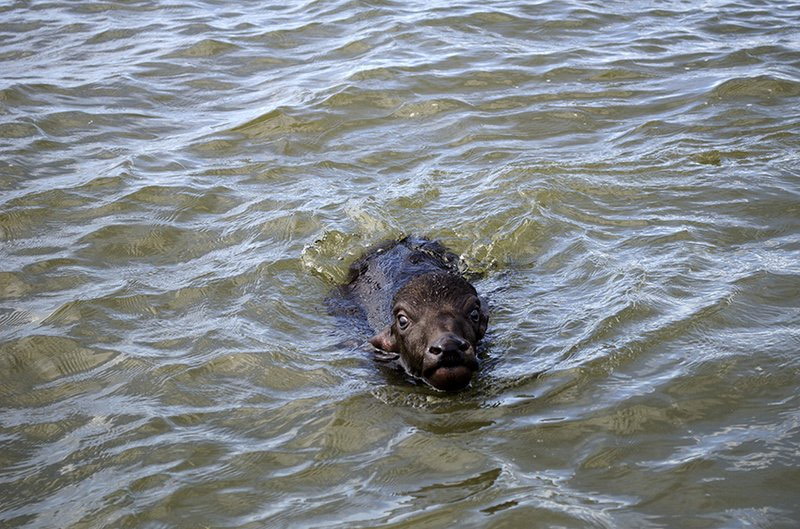 After being aided by the herd till the middle of the river, the practice session of the three-day-old calf comes to a halt. It is unable to swim as fast as the adults and is left stranded. The mother buffalo is helpless too 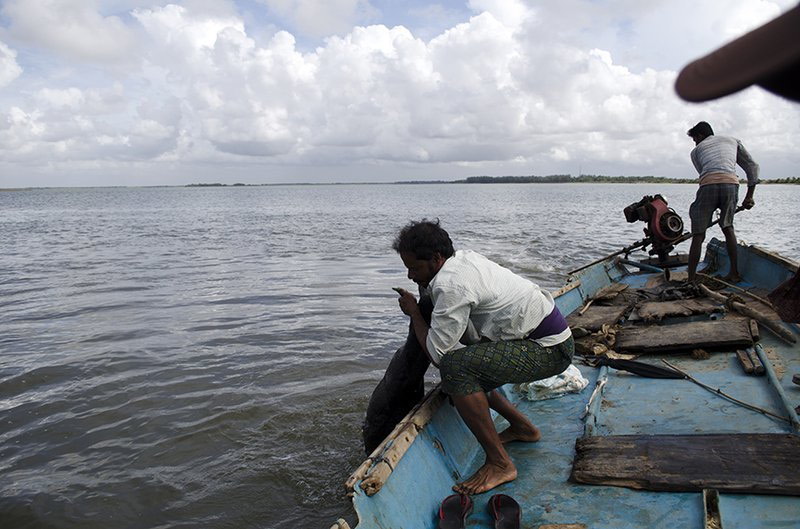 The herdsman approaches with the boat and pulls the calf aboard 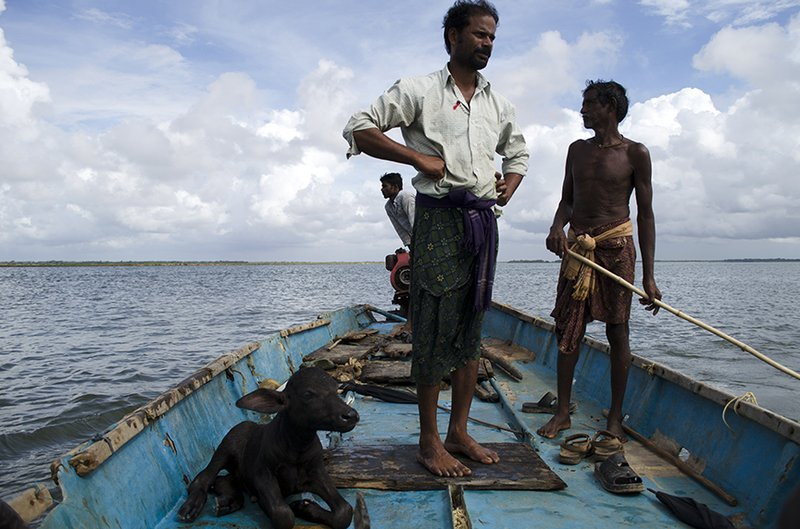 The calf looks settled but not entirely relieved 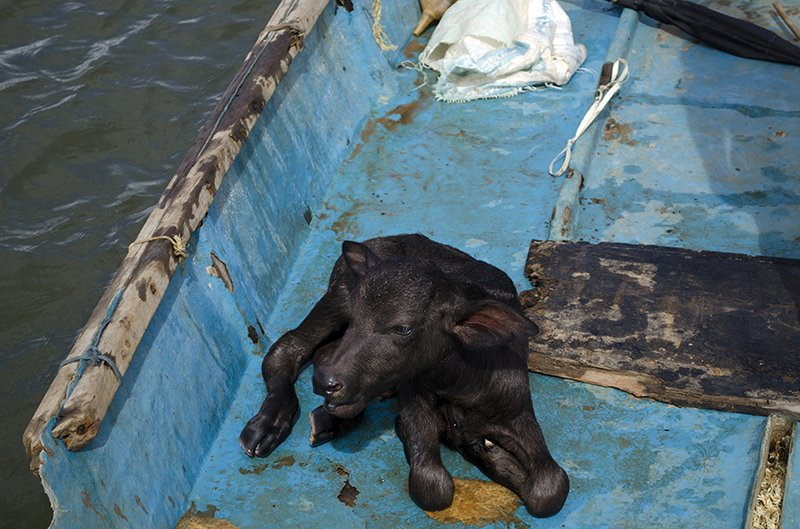 She keeps calling to draw her mother’s attention 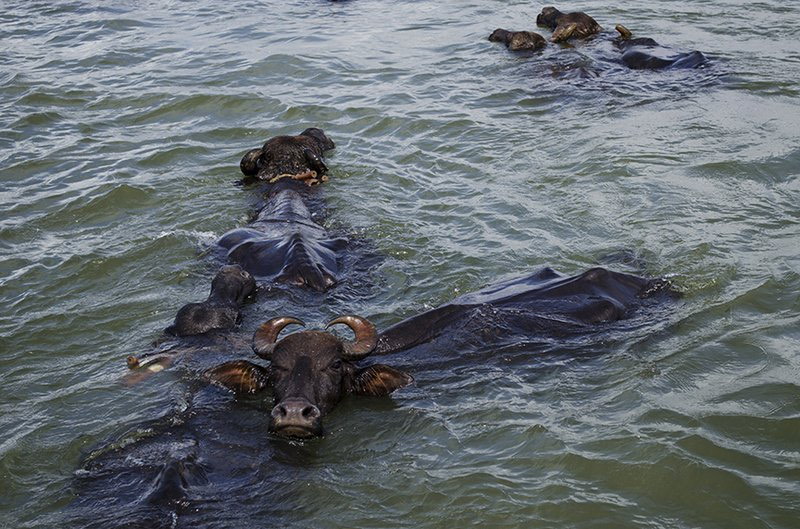 The mother buffalo keeps looking back at the boat and the calf, while the rest of the herd moves on 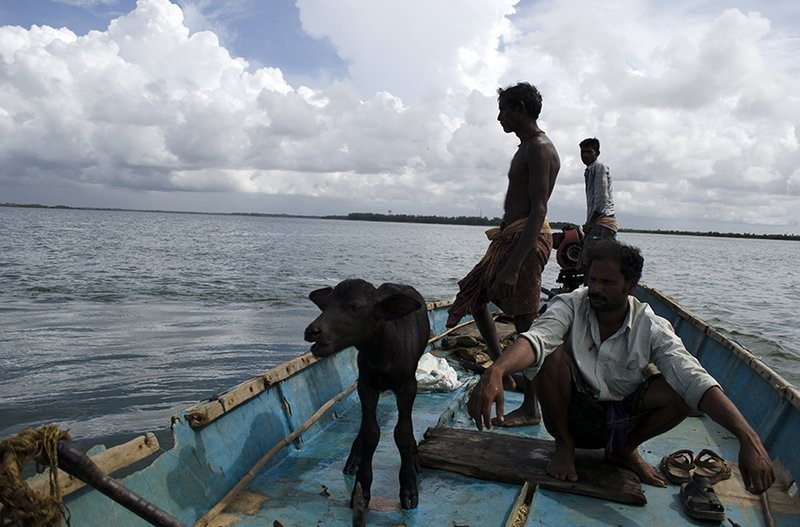 As the shore approaches, the calf stands up to jump off, eager to reunite with her mother 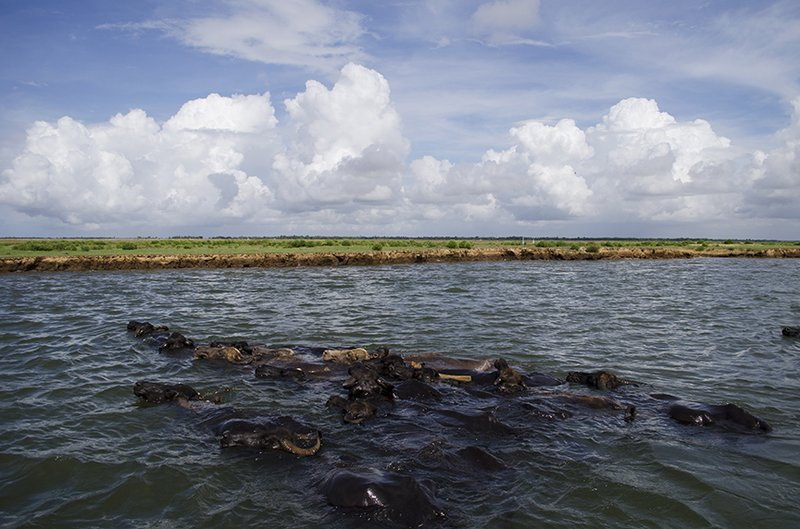 The herd is approaching the shore of the Manu dhia 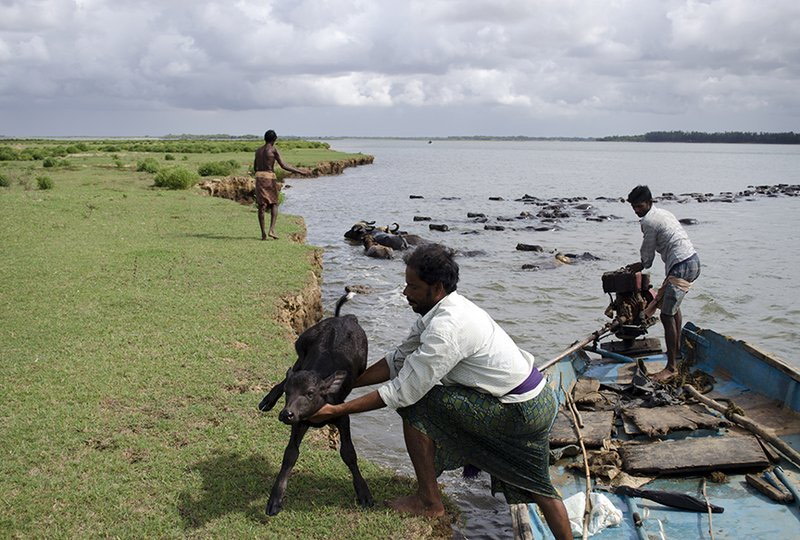 The calf is carried off the boat first 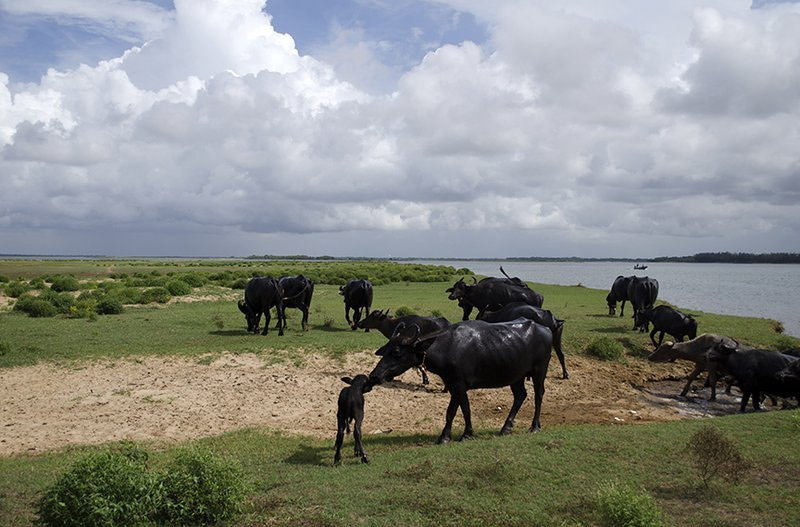 The mother buffalo arrives for an emotional reunion 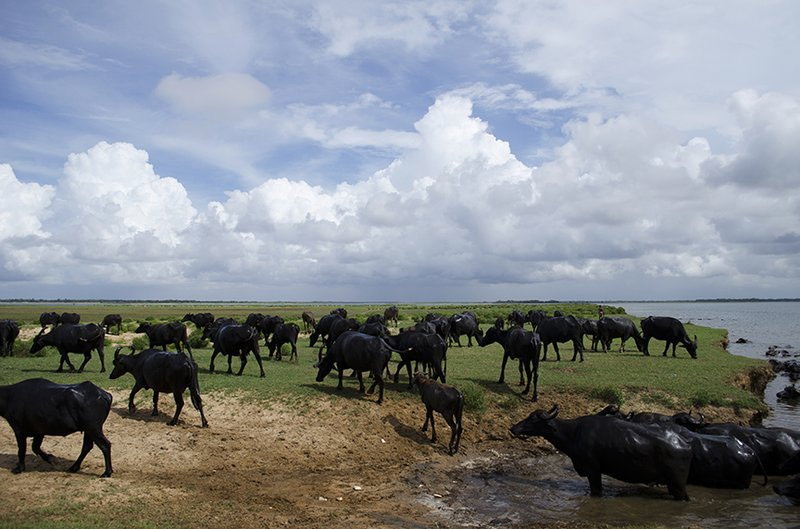 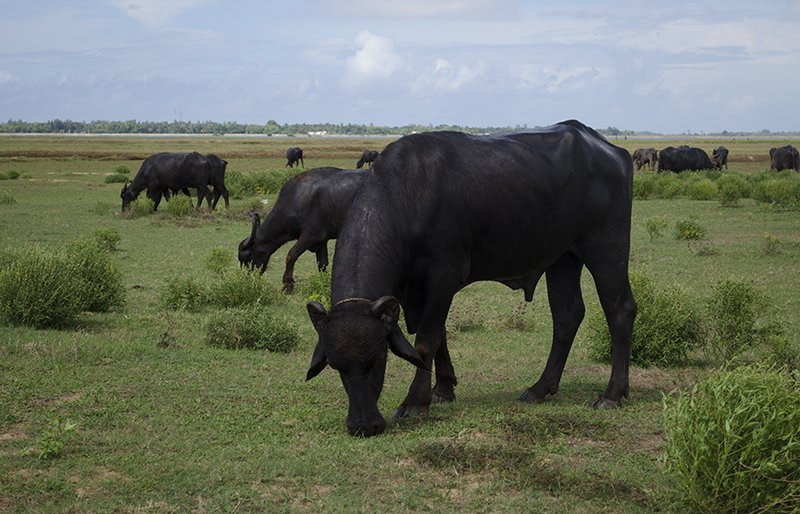 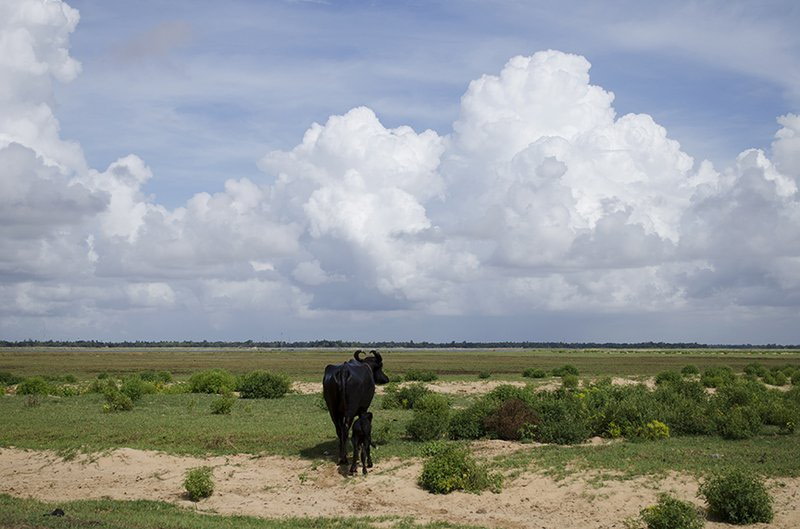 The mother buffalo leads the way to the field, and the calf follows. 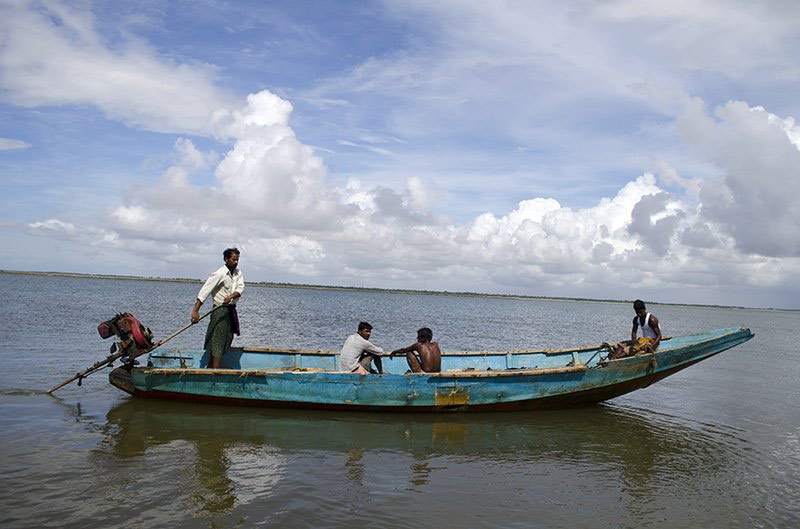 Having safely guided the buffaloes to the delta, the herdsmen head back to their village