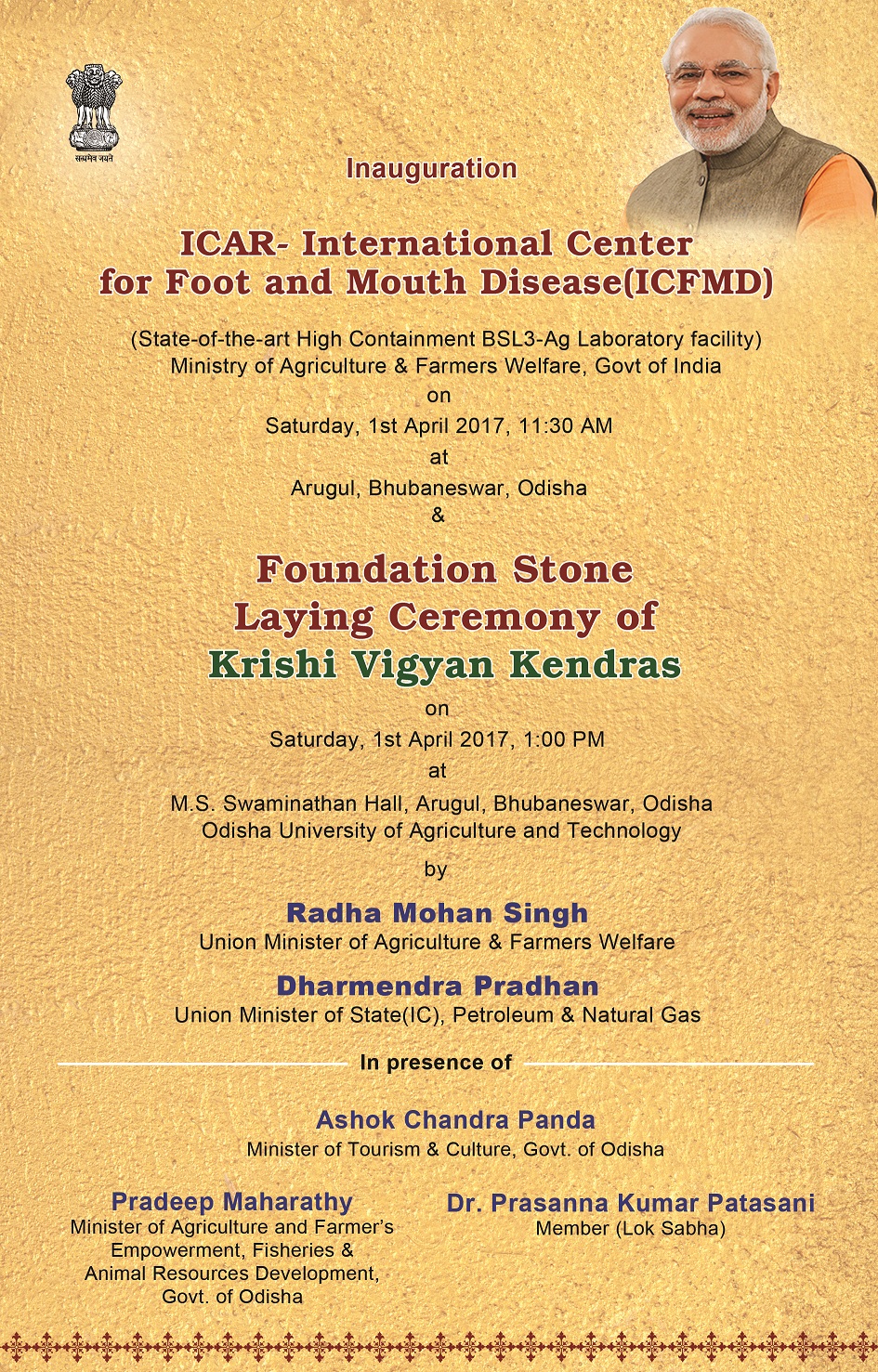 The Department of Foot and Mouth Disease (DFMD) organized a press conference at Hotel Suryansh where it was officialy declared the inauguration of the International Centre for Foot and Mouth Disease (ICFMD) to be held on 1st April, 2017 at Arugul, Jatni. The inaugural ceremony will be held in the presence of Radha Mohan Singh, Honourable Minister of Agriculture and Farmers Welfare, Govt. of India, Dharmendra Pradhan, Honourable Minister of State (IC), Union Minister of Petroleum and Natural Gas, Govt. of India, Pradeep Maharathy, Honourable Minister of Agriculture and Farmers Empowerment, Fisheries and Animal Resources Development, Govt. of Odisha, Prasanna Kumar Patasani, Honourable member, Lok Sabha, Dr. Trilochan Mohapatra, Secretary, DARE & Director General, ICAR, Dilip Rath, Chairman, NDDB, Sunil Kumar Singh, Additional Secretary and Financial Adviser, DARE/ICAR, Chhabilendra Roul, Additional Secretary, DARE AND Secretary, ICAR and Dr. H.Rahman, Deputy Director General (AS), ICAR. The ICFMD is a 200 crore project. In India the Foot and Mouth disease is endemic and occurs in all parts of the country throughout the year.  The earliest record of FMD in India dates back to 1864 when it occurred in many parts of the country. Four serotypes viz; O, A, C and Asia 1have been recorded in our country.  Out of these four serotypes, serotype O accounts for more than 85-90% of the outbreaks followed by types Asia 1 and A.  Serotype type C has not been recorded since 1995. Direct losses due to the disease in India are estimated at Rs. 23,000 crores per annum. The economic losses caused by the disease are mainly due to loss in milk production (80%) and reduction in the working ability of the animals. In addition to this, the milk and milk products, meat and hide are not accepted by countries free from the disease causing reduction in the export potential of livestock industry in our country.

History of FMD research in India dates back to 1929 with a transmission experiment in cattle. Effort to control the disease by vaccination was felt and initiated way back in 1943.  In order to strengthen the research activity on FMD, an integrated “All India Co-ordinated Research Project for FMD virus typing” was initiated in 1968 by ICAR with a Central Laboratory at Mukteswar and three Regional Centres located at Hissar, Hyderabad and Calcutta. Subsequently, the scope of this project was expanded in July, 1971 to All India Co-ordinated Research Project for Epidemiological studies on Foot-and-Mouth Disease with increased outlay and inputs in terms of laboratory space, experimental animal shed facility, scientific manpower, four additional Regional Centres and Epidemiological Units for extensive FMD surveillance throughout the country. In the successive years the activity of the project was expanded by incorporating several regional centres and network units up to 8th plan. In 9th Five Year plan the project has been upgraded to a Project Directorate functioning with a central laboratory at Mukteswar and 8 regional center and 15 coordinating units. Later, PDFMD has been upgraded as Directorate of Foot and Mouth Disease (DFMD) during 2015-16. Presently DFMD has 27 Regional and Collaborative centre covering all the major regions of the country.

The virus is of trans-boundary nature and poses major threat to local, regional and Global food security. As per the International guide lines (European Commission for the control of FMD, FAO/OIE), all laboratories, irrespective of the FMD situation in the country (free or endemic), handling of FMD virus must be carried out in high containment (BSL3+/ BSL3Ag) laboratory, and the safety precautions must preclude escape of even a single infectious FMD virion from the laboratory that has the potential to infect animals and cause disease. Due to the National FMD control program operating in India since 2004 by DAHD&F, the disease has been progressively controlled in many zones. India is currently in the stage-3 of Progressive control pathway (PCP) for FMD, and at this stage handling of clinical specimens suspected for FMD should be under high containment standards of BSL3Ag.  The Indian Council of Agricultural Research, DARE, Ministry of Agriculture and cooperation has taken a lead to establish such a state-of-the-art high containment laboratory facility at the appropriate time. Establishment of the International Centre for FMD (ICFMD) with BSL3Ag containment facility will cater to the need of the country for safe handling of FMD virus as per international norms. Further, the laboratory will help in analysing exotic virus strains circulating elsewhere in the world in order to develop preparedness in terms of diagnostics and vaccines in the event of their incursion into the country. The Government of Odisha provided the land, free of cost, for establishment of the facility. This is the leading FMD research institutions, the FAO Collaborating Centres, OIE Reference Laboratories, and also providing various technical and scientific experts on FMD from different parts of the world. This is the first laboratory of its kind in Asia, and not many countries have such a specialized BSL-3Ag laboratory. This prestigious laboratory will remain as a pride for the nation.