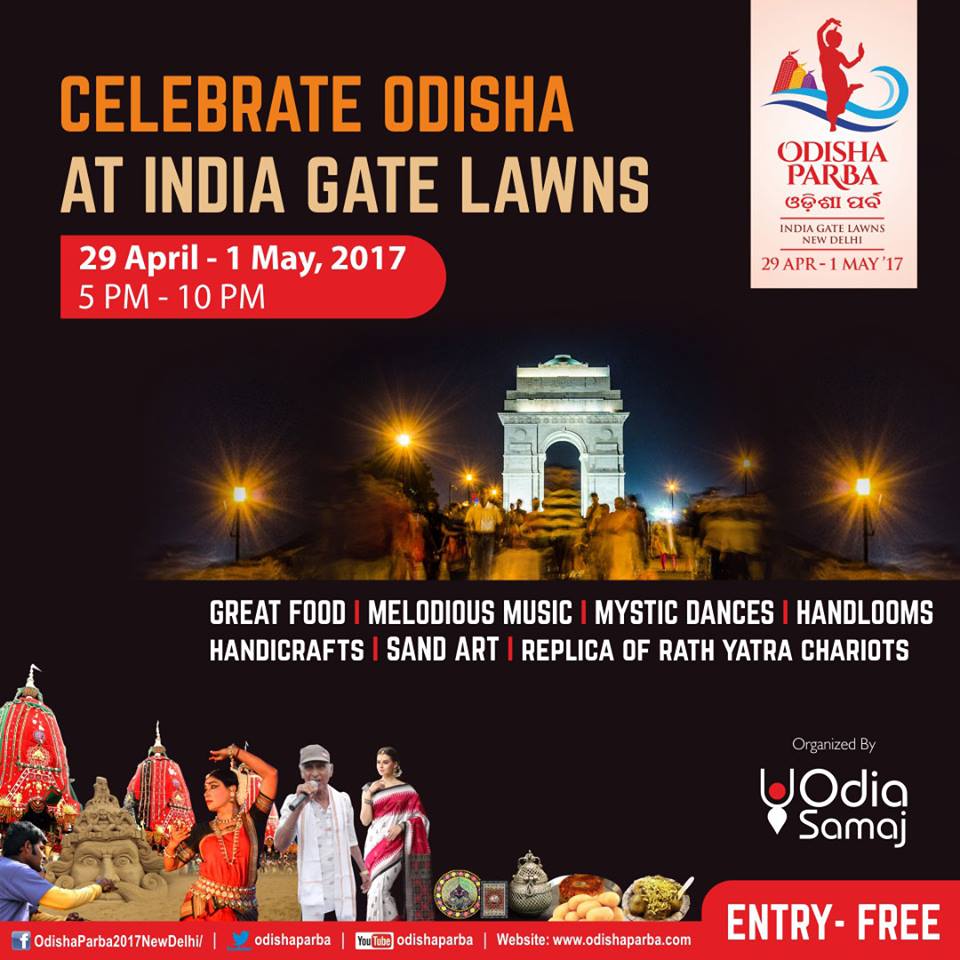 The residents of National Capital Region will have the unique opportunity to witness a breathtaking exposition of the Odishan culture at the lawns of India Gate this month. The three day event organized by Odia Samaj from 29th April to 1st May will bring alive the spectrum of Odisha’s history, art, culture, traditions, dance forms, culinary delights etc in a splendid style – the Indomitable Odias..

Narrating the objective behind the venture Shri Sidhartha Pradhan, Retired IRS officer and President of the Samaj said “This, first of its kind presentation to showcase the culture of Odisha with its multi-faceted dimension is to place before the National audience many unknown and lesser known facts about Odisha, an ancient civilization and the indomitable spirit of Odias, who have traditionally espoused a culture of Nationalism and Universal Brotherhood”.

The replicas of the three colourful chariots of Jagannath Dham will welcome the visitors to the abode of Odia culture. An exhibition titled – ‘Atma Shakti’, the power within propelling the indomitable spirit of Odias, will guide the visitors through the enchanting history of this ancient civilization. The exhibition through displays and narration will help the visitor to know about the progress of this ancient civilization over centuries including the march of the mighty Kalinga Empire which at its height under the native King Kharabela included eastern India & large segments of Central India and extended from River Ganges to River Godavari. The glorious maritime past during which Odias had flourishing overseas contact with many countries like the Roman Empire, Ceylon, China, Burma, the islands of Indonesia – Java, Bali, Sumatra, Borneo, collectively known as ‘Suvarnadipa’in the ancient worldwill guide the visitors to the golden era in the country’s history.

The valour of Paikas, a native army which fought the first war of independence against the British much earlier to the Sepoy Mutiny and the resurgence of the Jagannath Culture inspite of attack and invasion of the Jagannath Temple for 18 times will enlighten the inquisitive minds of knowledge seekers.

The panels and exhibits will also describe the resurrection of the state and Odias gaining separate statehood unifying the Odia speaking areas in 1936.  Odias fought for unification of Odia speaking areas without compromising their nationalistic spirit. The narration will carry the visitor through the hidden treasure of mineral wealth, pristine flora and fauna to the modern day monuments of giant industries, oil refineries and infrastructure – a glimpse into the potentials of a resurgent Odisha.

A symbolic replica of the Mountain Caves of Udayagiri will be erected at the site to provide the backdrop for a spectacular multi projector – projection mapping film– a brief light and sound presentation on Odisha and its spellbinding charm. The back drop will also provide massive 60 feet stage for the varied cultural programmes and folk dances of the state.

Interspersed in the ground will be smaller podiums staging some of the dying and traditional folk arts of the state. Groups of folk artists will also mingle with the visitors thus creating an ambience of merry making.

‘Hasta Shilpa Haat’ – the handicraft and handloom section in the festival will be the treasure trove of famed Odishan artifacts, sculptor and famous textiles. The high point of this haat will be live demonstration of various art forms like pattachitra paintings, shell crafts, stone crafts, famed appliqué work, stone work, sambalpuri sari weaving etc by master craftsmen and weavers.

The display of Sand Art by internationally acclaimed Sand artist Padmashree Sudarshan Pattnaik will be a major attraction in the Odisha Parba. A workshop in sand art will be conducted by the Shri Pattnaik which is sure to inspire the upcoming talents of National capital to learn about this globally acclaimed art form.

To top it all the Odisha Parba will have an eatery enclave which will be serving authentic Odia cuisine consisting of mouth watering snacks, world famous Odia sweets and veg and non-veg thali including a variety of sea food. Many of these food items will be novelties for the gourmets of the cosmopolitan National Capital.

The Odisha Parba will be inaugurated on 29th April, 2017 by Shri Arun Jaitley, Honb’le Union Minister for Defence & Finance & Minister of Corporate affairs, Govt. of India. Shri Dipak Misra, Hon’ble Judge, Supreme Court of India and Shri Dharmendra Pradhan, Minister of State for Petroleum and Natural Gas ( I/C), Govt. of India will be the Guests of Honour. Shri Venkaiah Naidu, Honb’le Union Minister of Housing and Urban Poverty Alleviation & Information & Broadcasting will be the Chief Guest on 30th April, 2017 and Smt. Draupadi Murmu, Honb’le Governor of Jharkhand has consented to be the Chief Guest for the programme on 1st May, 2017.

The event will be free of entry charges and will be open to all. For further details please visit- www.odishaparba.com