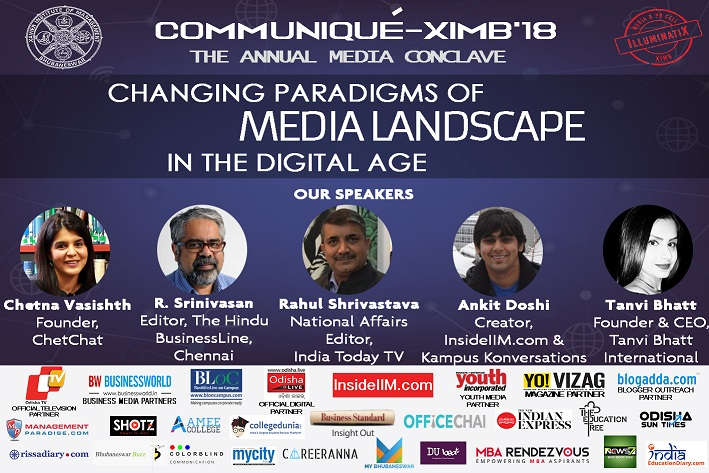 IlluminatiX, the Media and PR Cell of XIMB, ushers the fifth edition of Communiqué XIMB – the Media Conclave, on 9th September 2018. Communiqué-XIMB is aimed at stimulating the interaction between the media world and students. This year the topic of discussion is “Changing paradigms of Media landscape in the digital age”.

Mr. Rahul Shrivastava currently serves as the National Affairs Editor at India Today – India’s largest multi-platform news organization. In his journey from being a cub reporter with a newspaper to becoming an editor with India Today, he has witnessed governments come and go, politicians rise and fall and icons constructed and demolished. Reportage and journalism have been an inherent part of his DNA since the last 32 years. After his induction into the world of print media in 1986, he joined what, in the late 1980s, was then called “television news”. After serving brief stints at The Hindustan Times, “Down TO Earth”, and BiTV, he joined NDTV as the Political Editor and continued there for more than 17 years to become one of the foremost senior journalists of the country today.

Mr. R. Srinivasan is a senior business journalist and columnist, who has been reporting, analysing and interpreting the India growth story since the inception of economic reforms in India. Even prior to the start of reforms, he was one of the pioneers of corporate journalism in India, bringing first-hand experience and insight to reporting on Indian businesses, since he switched to journalism after nearly a decade-long stint in marketing in major Corporates. He has thus a vast repertoire of knowledge to draw from when engaging with people and has a unique ability to see facts and figures from both industry and media viewpoints.

Mr. Ankit Doshi, the creator of InsideIIM.com and the KampusKonversations, started it as a weekend hobby while being a Corporate Banker at Bank of America Merrill Lynch. InsideIIM.com gained virality on social media because of the kind platform it provided to the students and gave them insight into business school life and careers at India’s top companies
Ms. Chetna Vasishth worked with some of India’s largest MNC banks like StanC and ANZ Grindlays Bank after completing her post-graduate studies from XLRI, Jamshedpur. Thereafter, she set up and ran a training company that trained bankers both within India as well as overseas. Having been in the field of education for over a decade, she realized that students across India lack for authentic information. So, she created a platform wherein students and experts could share their genuine views directly with students and parents for free. This led to the birth of ChetChat, which is now India’s largest online talk show in the career and education space with over 160 videos, more than 50,000 subscribers and over 2.5M views.

Ms. Tanvi Bhatt is recognized as the ‘Personal Branding Expert’ for the CXOs by The Economic Times-Corporate Dossier, where she writes on all things personal branding under her signature column ‘Brand YOU’. Tanvi is a regularly featured expert across national and international newspapers, magazines and media channels such as The Times of India, The Economic Times, DNA, Hindustan Times, India Today, Entrepreneur, Inc., BusinessWorld, PITCH, Bloomberg TV etc. She has been bestowed with ‘The International Alliance for Women’s (TIAW) World of Difference Award’. She also has been felicitated as Brand Strategist of the Year 2014 at the Brands Academy Leadership Excellence Awards.
.
ABOUT COMMUNIQUÉ
Communiqué was started in August 2014 by IlluminatiX, The Media and PR cell of XIMB, with an aim to stimulate interaction between Media and Students. It has focused on important issues, such as- “Privacy and Media: A Mismatch?”, “Digital Media-Empowering Customers and Facilitating Managers of the future” and “Ethics in Media” in the past few years. This year’s theme is “Changing paradigms of Media landscape in the digital age”.
This year, IlluminatiX team started its preparation few weeks before by organizing few competitions in the campus, like “Communiquiz”, the annual Media and PR quiz, where participants were taken through a plethora of quizzing rounds that drove them into the world of Media, Advertisements and PR. Further, article writing and poster designing contests were also organized, thus providing XIMBians further impetus to foster their creativity.
This conclave has witnessed eminent media stalwarts in the past like DillipSatapathy, Resident Editor-Business Standard, Shweta Shroff, Director-Biddable Media at Performics Convonix, Sumrit Shahi (Novelist, Journalist, Screen Writer and Motivational Speaker),Ms. Rana Ayyub, Independent Columnist with NDTV and Outlook,Mr. Vishnu Som, Editor and Senior Anchor, NDTV and Mr Prabhu Chawla, Readers’ Editor, The Hindu.