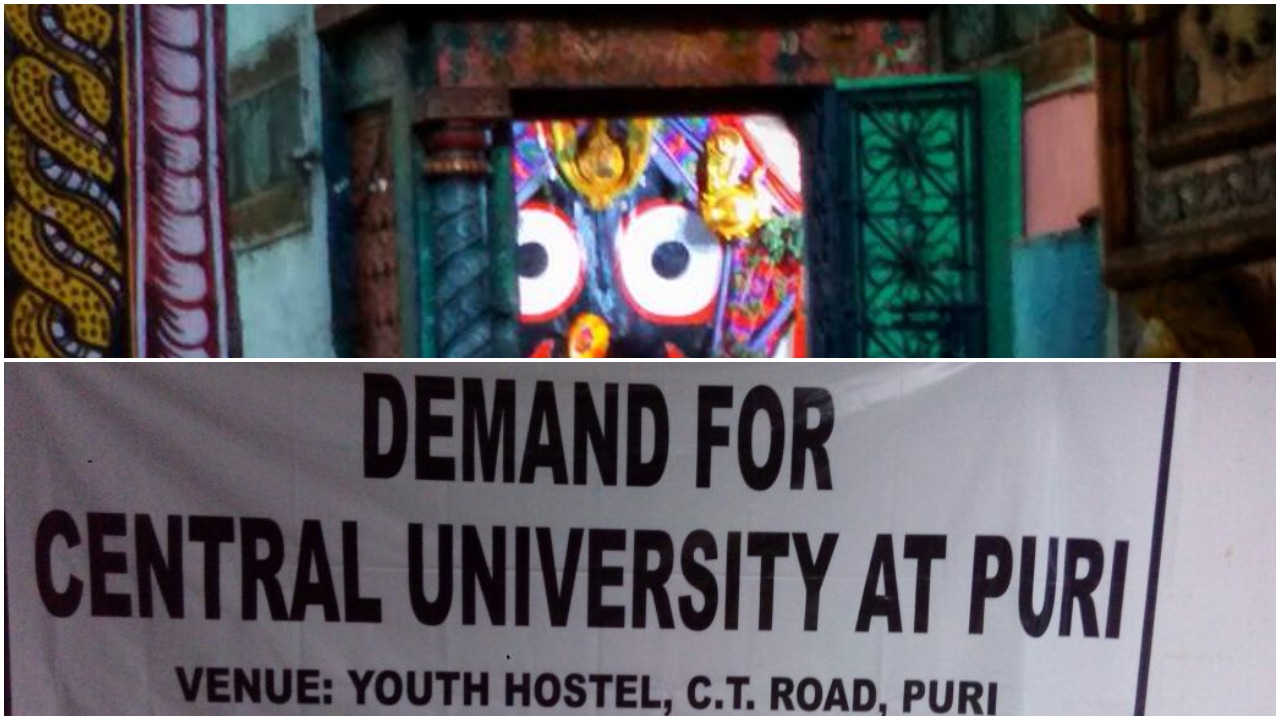 Recently on 27th December, many intellectuals gathered in Puri to consider the next steps to step up demand to establish a BHU type central university in Puri. Read more below on why the team thinks its high time every one should join to make this movement a success.

Puri is the abode of Lord Jagannath. It is one of the four dhams revered by Hindus
(and Indians in general), and considered the meeting ground of all branches of Indian
philosophy and all kinds of sects and religions from time immemorial. Famous sages
visited (and some stayed over) Puri and left their imprint on Puri. This includes, Adi
Shankaracharya, Narahari Tirtha, Nimbarka Acharya, Jayadeva, Sri Krishna Chaitanya
Mahaprabhu, and Vishnuswami, Madhvacharya.

Puri is one of the Char Dhams (Four pilgrimage centers) institutionalized by Adi Sankara
and revered by Hindus. A Hindu is enjoined to visit these places at least once in a
lifetime. Situated across the length and breadth of the country these are, Badrinath in the
North, Dwarka in the West, Puri in the East and Rameshwaram in the South. The four
kshetras of the Char Dham represent each of the four Yugas (Satya Yuga, Treta Yuga,
Dwapara Yuga and Kali Yuga or the present age). Badrinath is related to the first Yuga,
the Satya Yuga, Rameshwaram is related to Treta Yuga, Dwarka is related to Dwapara
Yuga and Puri is related to the present Yuga, the Kali Yuga. Adi Shankara (788-820 A.D)
selected Purusottam Kshetra (Puri) and established his monastery Bhogabardhana
(Gobardhan) pitha to preach the doctrine of Adwaita vedanta (monism) to people.

Puri is the abode of Lord Jagannath. The PIB article [1] mentions Raja Jai Singh saying
the following about Puri in 1580: “The pious land of Lord Jagannath, Orissa is not a
land to be conquered but to be worshipped because it is above the aspirations of human
being it is the land of Gods”.

There are several copper plate inscriptions, which established the idea of Lord Jagannath
as a paramount deity of the entire country. The concept of Lord Jagannath is not only
confined to Hinduism but also extends to both Jainism and Buddhism. Lord Jagannath is
the Kalpa Bruksha (boon giving tree), Yogamurti of the Siddhas, Bishnu for the
Vaishnavites, Shiva for the Shaivites, Mahabhairab for the Tantrics, Buddha and
Anupurusha (void) for Boudhas and Ganesh for the Ganapatya. Maa Subhadra, Shri
Jagannath and Shri Balabhadra represent the Trinity of Hinduism, i.e., Brahma, Vishnu
and Maheswar.

Puri has been a center of knowledge formation, agglomeration and dissemination from its
ancient days. There are records of 752 mathas (monasteries), and many Kotas, Jagas,
Akhadas and ashrams (hermitages) in Puri. Various priests, preachers, tourists, poets,
saints, seers, teachers, devotees and thinkers of the world visited Puri and many
established their knowledge centers at Puri. It was universally believed that the
Jagannath cult is the confluence of all religious faiths. The precepts of different sects paid
visit to the holy land of Puri and disseminated their philosophical doctrines. They
preached their philosophy, got themselves involved in the ritual services of Jagannath
temple and established their monasteries (mathas). The Mathas were originally founded
with the purpose of imparting education to disciples and give shelter to pilgrims, and
feeding travelers. Gobardhan matha is one of the oldest Mathas in Puri founded by Adi
Sankaracharya in the 9th century A.D. Tradition assigns some mathas like the Vrugu
Ashram and the Angira Ashram to earlier dates. The Vaishnava Mathas belonging to
7 different Sampradayas or sub-sects of the cult are numerous at Puri. Prominent among the
Goudyamathas are Radhakanta, Gangamata and Kathabhogo, whereas the Oriya, Sisu
and few other mathas belong to the local sect of Utkaliya Vaisnavas. The Gobaradhana
and the Sankarananda mathas are saiva, and the Kabir chaura matha located in their
vicinity belong to the followers of Kabir. The Bauli and Mangu mathas belong to the
followers of Nanak. Jaga, Akhada, Kota, and Goda are the other traditional institutions
of Puri whose core principles are that gymmastics for the body and music for the soul are
to be nourished.

Puri has made and continues to make major contributions in the field of art (various
forms: dance, music, painting, sculpture making etc.), architecture, literature, science
(especially, astronomy), religion and tradition. Gitagovinda by Sri Jayadev was
composed in Puri. The classical dance form of Odissi as well as the classical music form
(also called) Odissi was nourished in Puri. The patta painting form evolved, nourished
and flourished under the cult of Lord Jagannath. The Kalinga style of architecture has its
origin in Puri. Pathani Samanta, an astronomer of the rank of Aryabhata, Varahamihira,
Brahmagupta and Bhaskaracharya was from Khandpada, in the greater Puri district (now
in the recently carved out Nayagarh district). He fabricated ingenious instruments out of
wooden sticks and bamboo chips and attained great accuracy in measurement. His
scientific investigations are recorded in his astronomical treatise “The Siddhanta
Darpana” composed in Sanskrit Verse, in Odia script, and on palm leaves. Konark, also
in Puri district, is an UNESCO world heritage site and is known for its art and
architecture. Puri continues to churn out knowledge in all these fields. Recently, Mataji
Parama Karuna Devi, founder and director of the Jagannatha Vallabha Vedic Research
Center, has written a multi volume book titled Introduction to Vedic knowledge.

During pre-independence era Jayee Rajaguru of Birharekrushnapur (a village situated in
the vicinity of Puri town), and Chandan Hazuree of Puri town fought against the Britishers to upkeep the sovereignty of the soil. An unique experiment in the field of education was made at Satyabadi, Puri with the establishment of Satyabadi bana vidyalaya (on 12th Agust 1909) in the midst of mango and bakul groves by the great freedom fighter, social worker and poet Pt. Gopabandhu Das and his followers Pt. Nilakantha Das, Pt. Krupasindhu Mishra, Pt. Godabarish Mishra and Pt. Acharya Harihara Dash; together called as “Pancha sakha”. Later the school became an active center of the non Co-operation movement.

Puri also has an important maritime tradition. The Archaeological excavation at
Manikapatna (in Puri district) provides a running chronology of historical habitation as a
port or trade center from 1st century A.D. to 18th century A.D. It serves as a benchmark
to study the settlement pattern and trade route of Puri. Abul Fazal described Manikapatna
as a seaport where taxes were collected. Manikpatna is the only site along the sea coast of
India from where varieties of ceramics including Chinese Celadonware have been
reported. The presence of pottery, artifacts and coins indicates the impact of early sea
trade between Odisha and the Mediterranean world. The existing temple of Lord
Jagannath was known to international sailing community as an important landmark while
moving in the Bay of Bengal.

In conclusion Puri, the abode of Lord Jagannath, is a special place in India and has a history of being a center of knowledge. Moreover, Puri has fallen behind Varanasi (which has the central university BHU, an IIT and much more) and Tirupati (which has an IIT, an IISER and much more). Also, no government can ignore a genuine demand by the people for a knowledge institution in the land of Lord Jagannath.

Why BHU type Central University: BHU with a student body of 20,000 has a wide array of disciplines such as various languages, social sciences, philosophy, mathematics, sciences, law, medicine, engineering (IT-BHU became an IIT), education, commerce, visual arts, performing
arts, Sanskrit, agriculture and management. Such a university does not exist in Odisha.

But Odisha has been already given a central university in Koraput!
Since 2009, when CUO Koraput was established, Bihar has been given SIX centrally funded universities in Gaya, Motihari, Kishanganj (a center of Aligarh Muslim University), Nalanda, Pusa and Vikramshila.
1. http://cusb.ac.in/ at Gaya
2. http://www.mgcub.ac.in/ at Motihari
3. http://www.nalandauniv.edu.in/ at Nalanda
4. https://www.amu.ac.in/kishanganj/ at Kishanganj
5. http://www.telegraphindia.com/1160115/jsp/bihar/story_63905.jsp#.V2P_CeYrJE5 at
Vikramshila
6. http://indiatoday.intoday.in/story/parliament-passes-bill-toupgrade-rau-into-central-varsity/1/665943.html at Pusa.

Surely, Odisha’s desire for a BHU type central university in the abode of Lord Jagannath is reasonable and appropriate.

Know more from the links below: