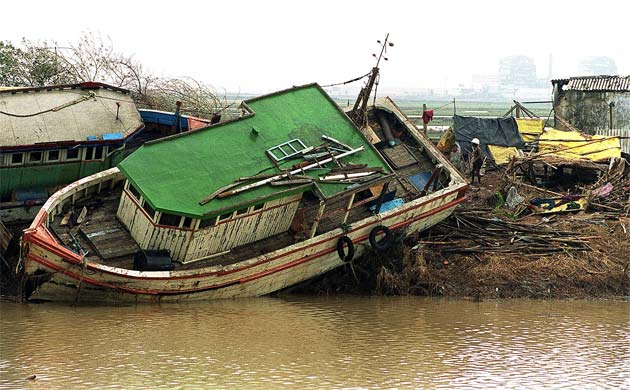 My cameraperson and I had driven from Visakhapatnam through Srikakulam to Bhubaneswar and then to Paradip, less than two days after the cyclone struck that year.

As dusk came and we were a few kilometres into Odisha (then called Orissa), we realised there was no power supply and no phones. We had driven on the highway towards Bhubaneswar and it was night by the time we crossed the state capital. So pitch dark was it that we didn’t realize we had passed Bhubaneswar by. We were almost driving blind with no lights to indicate where we were.

When we did realize that we’d crossed the city, we turned back and headed towards the chief minister’s home. I needed a phone to inform my workplace and the world outside what I had found in cyclone-hit Orissa.

I found Chief Minister Giridhar Gomang a sweet and simple man. He and I took turns to use the only working phone available.

I wanted to report to the world that Orissa was in darkness and that there was large-scale looting on the highway. People were doing that not to exploit the crisis situation, but because they were sick of waiting for and not getting help. So they were taking what they could from people who they thought could afford it.

They allowed us to go after much convincing that we were a media team and there to tell the outside world about their plight. That was the condition on which we were given the go-ahead.

It was past 2:30 am by the time we got to a hotel. There was no power at the hotel which was one of the biggest at that time in Bhubaneswar and no room available. We took a couple of hours to freshen up in the single room we managed to get with help from my colleague stationed in Bhubaneswar and proceeded towards Paradip at day break.

So far no one knew what was happening in the place. We needed a fuel refill and that was not easy. The hotel restaurant wasn’t open either. Armed with some biscuits, we left. All along the way, people were headed away from the direction in which we were going. People carrying children, old people, whatever food was left.

There was no road in most places. We could only see water over large stretches, the tops of trees and houses here and there atop which were perched people waiting for help. They waved to us, waded towards us wherever possible when we asked questions, but we couldn’t assure them that help was on its way. All we could do was part with the biscuits and some dry snacks we were carrying, because small children had been hungry much longer we had.

Those were the days before the dozens of news channels of today. In the middle of all the tragedy and devastation and loss, the camera strangely brought smiles and giggles, some youngsters seeming almost amused to be filmed. While that may sound a little insensitive to suggest, I remember thinking that it is a strange human psychology. Sometimes we manage to be amused and smile in the middle of the most difficult times for the most strange reasons. May be that is what makes it possible to go on.

I went back a few days later to do special reports on the psychological impact of such massive devastation on young minds. Nimhans, Actionaid and other agencies were trying to reach out, give professional help. At the mental health hospital in Cuttack where I arrived in the morning, there were inpatients going around the place and not a single person from the hospital administration or medical fraternity. I found the superintendent incharge at his home and asked what would happen if anyone just walked out and away. He said, what can be done, there are not enough people. The administration, not just here, but in the entire state is in a shambles.
The official death toll in the 1999 Orissa super-cyclone was put at 10,000. But I really don’t think an accurate head count was possible.

We did another special report on why there were not adequate warning systems. We found pathetic equipment at the Met office in Cuttack and elsewhere. In comparison, Andhra Pradesh was so much superior in cyclone preparedness. There were lessons Orissa needed to learn then.

First published in NDTV in 2013