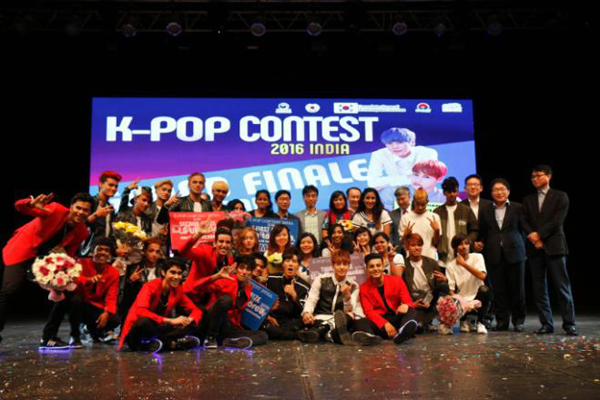 K-pop (short for Korean Pop) is a musical genre originating from South Korea that is characterized by a wide variety of audiovisual elements. Although it comprises all genres of “popular music” within South Korea, the term is more often used in a narrower sense to describe a modern form of South Korean pop music covering mostly dance-pop, pop ballad, electronic, rock, hip-hop, R&B, etc.

First gaining popularity in East Asia in the late 1990s, K-pop entered the Japanese music market towards the turn of the 21st century. In the late 2000s, it grew from a musical genre into a subculture among teenagers and young adults of East and Southeast Asia. Currently, the spread of K-pop also known as Hallyu Wave can be seen in non Asian countries like USA along with some European countries as well. In India, the Hallyu wave began in the early 2000s in the Northeast region and it has been spreading to other parts of the country rapidly.

Due to the persistent efforts of Korean Cultural Centre India, K-pop which forms an integral part of the current Korean Culture has marked its success and popularity in India through K-Pop Contest India, held every year since 2013.

K-Pop is a genre of music that the Indians are finding attractive with Psy and his iconic Gangnam Style working as an initiation into the genre for those who were new, so much so, that even in a Punjabi wedding in North India, you can see people grooving to the beats of the song.

The K-Pop Contest has grown over the years and the Korean Cultural Centre, India in association with their partners brings you this opportunity to be a part of this even bigger festival, to be held again this year.

K-Pop Contest 2017 India Rules are out!
Go to kpopindia.com and read the rules carefully.